Bir is a small village in the Kangra district of the North Indian state of Himachal Pradesh. It is in the Deer Park Institute located at Bir that GRAIN along with its Indian collaborators Kalpavriksh environment action group and other friends organised a North India level regional workshop on the Biodiversity Regulation Legality & Reality through 17-18 May 2007. The setting in a microcosm reflected the threats to both natural diversity and diverse cultures across the globe; yet it showed peoples resolve to continue to strive and how little efforts could go a long way. 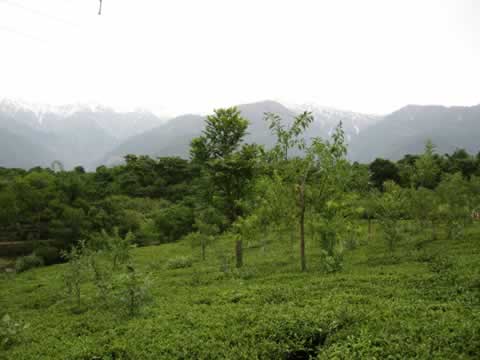 It is under the British colonial rule that tea was introduced into the Kangra valley in the nineteenth century. The tea industry and the soil it is grown in is far from healthy today.
This valley is not untouched by the âGreen Revolution; the neighbouring Palampur has its own hybrid variants of wheat introduced there by the ICAR. The Himachal Pradesh Agricultural University at Palampur was recently in the news for having developed five new hybrids, three of wheat, one of paddy & maize each.

There has been sustained schemes from both the federal and the state government to shift farmers to short duration high yielding varieties, for example those of wheat.

The demonstration fields of the agriculture research stations at Palampur; local groups are concerned that field testing of transgenics might be ongoing without due safety protocol. There is not much publicly available information. The Institute of Himalayan Bioresource Technology
http://www.ihbt.res.in/ has developing transgenics very much on its research agenda!

A familiar scene outside many a hill home, corn strung out to be kept. Maize is major crop for the state of Himachal. Under a scheme sponsored by the Government of India hybrid maize has been given much emphasis in the year 2006-2007.
http://www.hpagriculture.com/

As is common in these parts, a large burden of farming activities falls on the women’s shoulders.

At harvest time, the whole family and often even neighbours are roped into the farm activity. With the urban exodus more so by the younger generation, less and less able hands are available on-farm.

Some of the wheat is saved at home; as per some farmers the seed replacement ratio has steadily been rising. There are very few who have their own seed (desi beej) left.

The small farmers there also lament the loss of pure local species of cattle. Himachal is home to two nomadic tribes the Gujjars and the Gaddis, their sheep-rearing also comes under threat with today’s newer demands on land and forest.

The institute was the venue for the workshop, which earlier housed over 400 Buddhist monks.
http://deerpark.in

Amongst the interactions the most valuable were those amongst the participants present from other North Indian states and the local farmers. Some of the Himachali farmers spontaneously drawn in by the seed display, were working as part-time carpenters and painters to supplement their low incomes from farming.

The GRAIN presentation attempting to explain why the patent system is inappropriate to protect local traditional knowledge. The participants were particularly concerned about being compelled into a state-sponsored documentation exercise in the name of implementation of the Biodiversity laws.

Food aid to Tibetan refuge camps comes in the form of USAID (GM!) foods such as this can of edible soybean oil. These then make for flower pots in several Tibetan homes. Boarding schools with Tibetan refugee children have their hostel menu lined with such ingredients received through overseas food consignments. The Tibetan Government-in-Exile has officially adopted an organic agriculture policy. Its Department of Home supports the replacement of chemical-intensive agricultural production with organic practices and natural farming. This has implications not only for the land that is Tibet, but those in China and the widespread Tibetan agricultural settlements in India. The Tibetan participants in the workshop were particularly keen to learn from the organic farmers present from other parts of India and also carry back with them seeds to be sown in their refugee quarters.

The cultural evening planned by the co-organisors was a true ice-breaker for the participants. As they discussed the circle of life in the formal workshop structure, they met as a circle of friends outside of it. Despite the diversity amongst the participants they shared

Biodiverse practices alone can ensure that there is food for all sentient beings and not only to feed the greed of some.