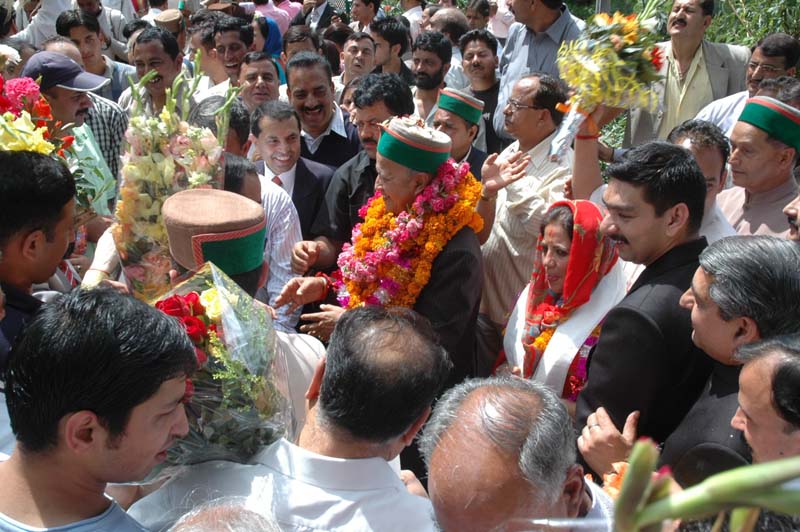 Himachal Pradesh would not permit construction of the hydro electric projects and proposed ski village at the cost of its environment as the state government is committed to protect the environment, flora and fauna of the state at all costs to reduce the impact of the global warming over the Himalayas. This was stated Virbhadra Singh, Chief Minister, to the high level delegation led by the famous environmentalist Sunder Lal Bahuguna, who called on him here today to greet him on his 74th birthday and also thank him for the environmental safeguards being taken by the state government.

He said that he introduced the carton packing cases to the producers which they initially objected to but later when it starting fetching them remunerative prices opted willingly for the same which had saved the state of its valuable wealth of saving its forests.

He said that now none of the apple and other fruit growers were using the wooden boxes since the card board boxes were more attractive and marketable qualities liked by the consumers.

He said that his government had abandoned hydro electric projects of 460MW in Kinnaur and Kullu districts keeping in view the effect on the environment, flora and fauna, as also the aqua life in the valleys.

He said that projects were strictly constructed on the basis of run of the river and no dam storage projects permitted.

Sunder Lal Bahuguna, said that he toured various projects and areas to take stock of the environmental impact due to the project construction and allied activities and by and large the position was appreciable except few places where the government required to pay attention immediately.

He underlined the need for the Himalayan Policy for the protection of the environment in the Himalayas. He said that Uttrakhand was taking inspiration from Himachal in apple cultivation.