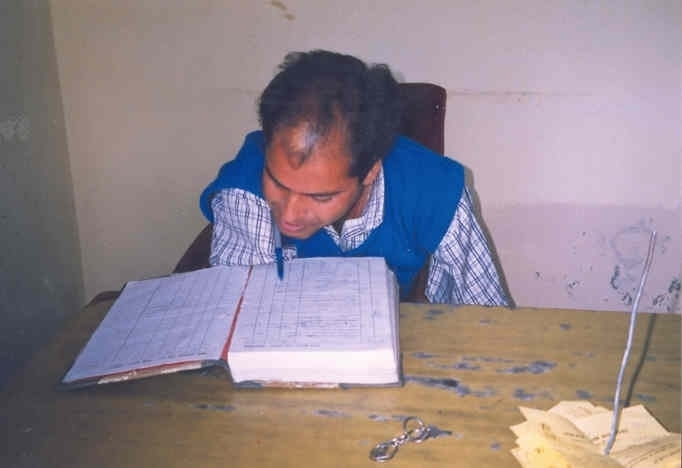 He is a man with a difference. He can think better. He can write better. He can speak better. However, he is without limbs and that it why he is always respected by all and sundry who visits the temple of Baba Balak Nath at Deotsidh in Hamirpur district from time to time.

The thirty-six years old, Kaul Dass of Khann village of the Hamirpur district is a man to watch with rapport attention. He is handsome, smart but a man with difference. He writes profusely but with a difference. While others write with their hands, he writes with his teeth, as he is limbless. He does his work more accurately than others, as he is a good worker.

Who so ever comes to temple, he meets Kaul Dass, as he maintains records of all who come to the temple and want to stay in the temple for the night. He provides them all sorts of material for their night halt and issues them a receipt. People watch him with rapport attention when he writes with his teeth as he is handless.

Hailing from a remote village of the Hamirpur district, Kaul Dass used to sing songs to earn his livelihood on the floor of historic shrine of Baba Balak Nath at Deotsidh in Hamirpur in the early age. He is a rare case of genetic abnormality (Maromelia). From there he was taken to the local school by the then Mahant, Shiv Gir of BBN temple. He studied up to B.A from BBN College Chakmoh and later on did his Post graduation in English with 55% marks as a private candidate.

He works as a clerk in the temple and presently he is working in the main gate of the temple. However, those ruling the temple play a joke with him and used to shift him from one post to another due to his disability.

Narrating his past, he says that he was considered to be a bad omen for the family when he took birth. However, his mother nursed him without caring for the comments by the local community. In this process, he also got full support of his father, sister and younger brother. The younger brother accompanies him till date and both serves in the same section of the temple. He was given this job by the present chief minister, Vir Bhadra Singh, when he had taken over as the chief minister of state in year 1985.

Kaul Dass says that he is indebted to his family for what he is today. He gives full credit to his mother, two sisters and a brother who still nurse him. His younger brother, Bikram Singh still takes care of him and works along with him in the temple. He brings and takes back
Kaul Dass to temple and then to home in a bus.

He says that he is happy with his present status. He has no regret for his disability.
He is a keen follower of Baba Balak Nath and goes to his cave daily to pay his obeisance there. He says that Babaji has given him strength and power to face the world. He has no grudge with the God. The God has given me everything and I’m happy with that.