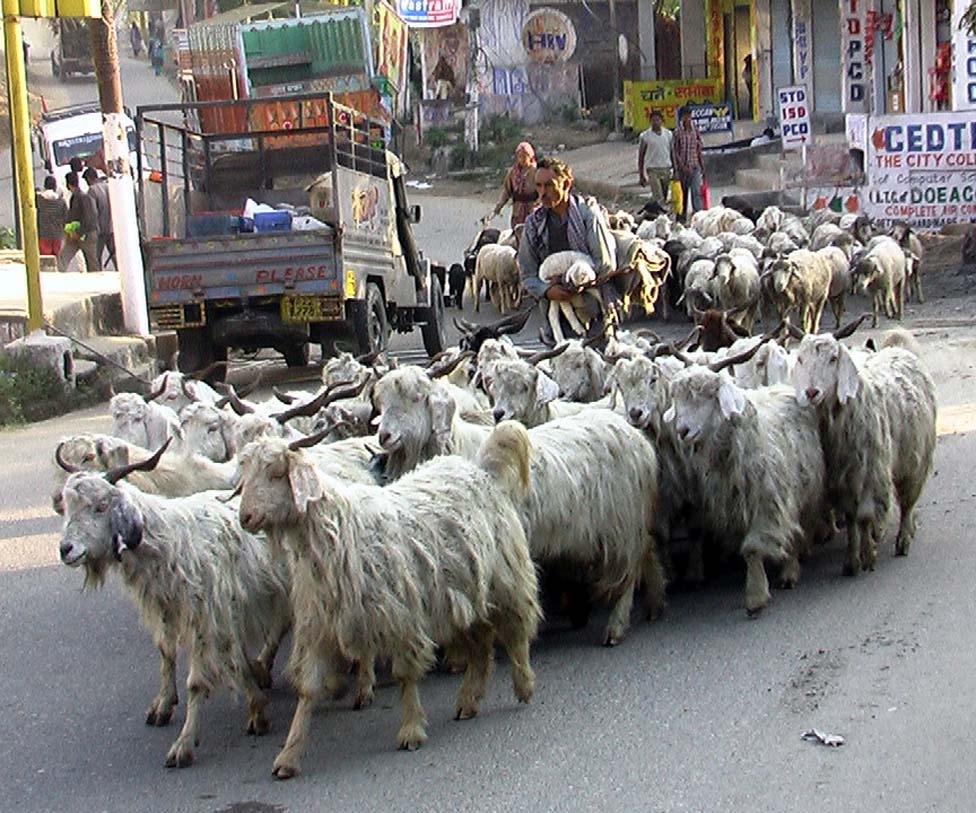 With the advent of winter, Gaddis (shepherds) move to plains along with their herd of sheep and goats for their pasture. However, with the onset of summer they go back to hills to meet their families. They mainly belong to Bharmaur area of the Chamba district of Himachal Pradesh.

They have homes, substantial village houses, and they own land which they or their family cultivate, their homeland is Gadderan, Bharmaur tehsil, in the west of Chamba district. It comprises the valleys of the upper Ravi and its tributary the Budil.

During the last hundred years or so many Gaddis have bought land and built houses on the southern slopes of the
Dhola Dhar- the northern edge of Kangra valley but whether or not they still have land or relations in Bharmaur tehsil, they consider themselves as belonging to Gadderan. While the Gaddis of Bharmaur falls in the category of scheduled tribes, no status has still been given to their Kangra district counterparts who also live in the same conditions but with no facilities from the state government. The previous BJP government had assured them that they too would also be covered under the S.T category. However, the BJP government collapsed just before providing status of ST to them by the state government after getting permission from the central government.

At least six groups of gaddis reached Hamirpur town from various parts of Punjab today where they spent months together grazing their cattle wealth. They were accompanied by their sheep, goats and big dogs to protect their flocks. They were moving slowly and steadily on way to their respective destinations.

Ram Singh of Chhota Bhangal area said that he had come with a flock of 500 animals this time. However, the flock rose to one thousand, he added.

He said that gaddis were happy with their present status and were following the century old traditions. We worship Lord Shiva as he (Lord Shiva) is our chief Devta. He said that about fifty percent of gaddis had no flocks and they work in their fields. About 3,000 persons go to plains along with their flocks as during the winter their areas faces acute shortage of pastures.

According to him, they have grazing rights in almost all parts of Punjab, Haryana and Himachal Pradesh on basis of old traditions.” No one stops us from grazing the flock in their fields. At many places, people themselves offer them their fields and also provide them with food as a goodwill gesture. There is general belief in the people that with the arrival of gaddis along with their cattle wealth in their fields, their productions will increase and they will not face any threat from evil forces, “he added.

Another shepherd, Nandu Ram said that despite his old age he used to visit plains every year. He said that he had been visiting plains for last sixty years except for once when he had fallen ill. He said that it was too hot in Punjab this time due to change in the weather.

He said that such tours were fantastic and were beneficial to them and their families.