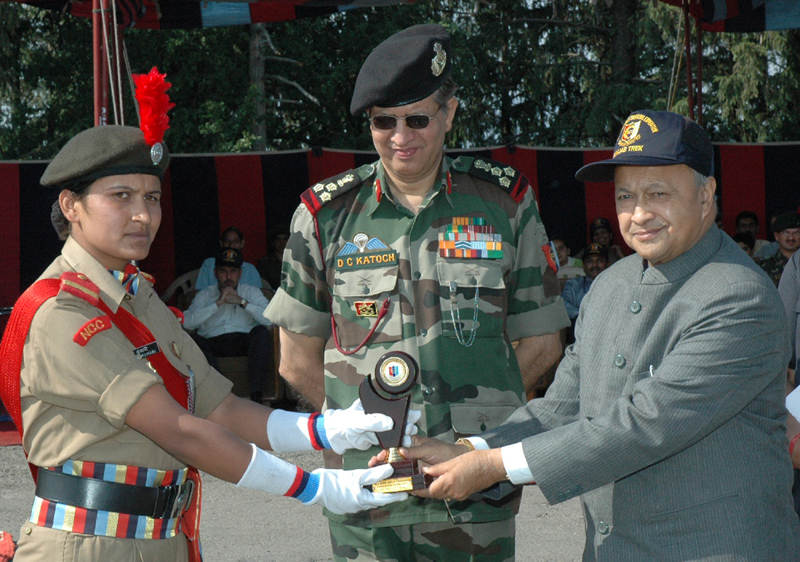 Virbhadra Singh, Chief Minister, said that his government would be considering the various modes for making NCC activities mass movement and promote NCC activities in all the educational institutions, besides following the norms of the Union Ministry of Defence for the disbursement of the rank pay and allowances to the NCC officers and cadets during the centrally organized camps and courses in the state. He was addressing the Flag-in Ceremony of the week-long All India NCC Girls Trekking Expedition of the 1050 cadets from 14 states which concluded at the Kalyani Helipad, Chharabra, near Shimla today.

Chief Minister said that his government was according top priority to the NCC activities in all its educational institutions, with a view to inculcate the spirit of nationalism, discipline, patriotism and universal brotherhood amongst the young people at their very adolescent age. He said that the NCC officers needed to work more dedicatedly to educate their cadets about the rich cultural heritage of the country, so that they were groomed into responsible citizens.

Chief Minister said that the state had almost everything to cater to the needs of the adventure lovers and tourists. He said that Himachal Pradesh happens to be the only state in the country, which has its geographical area at all alleviations. He said that there were easy and tough trekking routes available to the adventure lovers, depending upon their capacity to undertake the same while nature was at its best in every part of the state, which people enjoy all round the year. He hoped that the trekking expedition of All India Girls NCC must have provided the young girls opportunity to be in close encounter with the nature and contributed in building their stamina.

Brigadier D.C.Katoch, Deputy Director General, NCC, welcomed the Chief Minister and apprised him of various demands and measures required to strengthen the NCC activities in a big way in the educational institutions of Himachal Pradesh. He informed that Ministry of Defence had approved 20 percent reservation for Officers Training Academy at Chennai for NCC Girls from current session onwards, period for senior division reduced from three to two years. He informed that NIIT would be training 20 girl cadets from Punjab, Haryana, Himachal and Chandigarh for training besides delivering career councelling and placement services to the NCC cadets. He said that a website had been launched for the benefit of the cadets. He added that the camp budget had been increased from 50 percent to 75 percent by the Government of India. He said that efforts afoot to sponsor five cadets from every state for foreign trip every year. He also counted the achievements of the NCC activities in Himachal Pradesh.