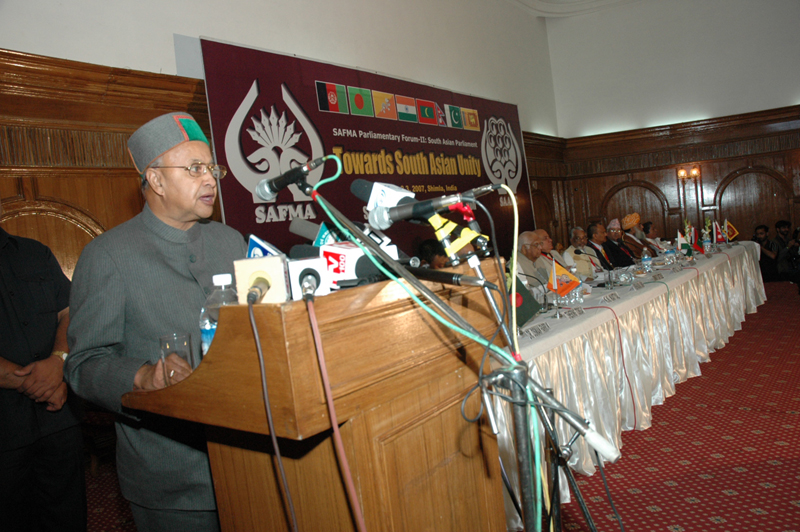 Virbhadra Singh, Chief Minister, HP, emphasized the need for internalized productivity-employment linkage in the thought process which could lead to greater intra-state peace initially and regional peace ultimately. He was delivering his opening remarks in the inaugural ceremony of the two-days long Conference of Parliamentarians from SAARC countries, organized by the South Asian Free Media Association (SAFMA), to commemorate the 150th Anniversary of the War of Independence (1857), here today.

Chief Minister said that as a region, the SAARC block is well endowed with respect to environmental issues on sustainability of life systems and Himachal Pradesh initiated ban on all green commercial felling about 23 years ago to avoid the risk of loosing potential revenues needed for developmental activities of the state. He said that the state took this step not in its exclusive interest but in the interest of the north Indian plains in the immediate context and in the global context in the long run. He advocated that such initiatives needed to be spread out in the overall interest of environmental conservation and sustainability.

Virbhadra Singh said that when the trans-national and trans-continental barriers in trade, movement of fiscal resources and movement of manpower are getting gradually lowered due to globalization of the economy, it would be imperative that the SAARC member countries hasten to do so for being partner in the mainstream, rather than lagging behind in sharing the benefits of an enlarged global pie.

Chief Minister said that the areas of human security, poverty alleviation, food security and environment were crucial to the success of regional cooperation among the SAARC nations and these impinge on the issue of subsistence. He said that the question of food insecurity in the region has become the matter of bygone era and given the current focus on the farm sector, the region was insulated against the concern of food security at al overall level. He underlined the need of concerted efforts by the member countries of SAARC for productivity enhancement in the farm sector keeping in view the dependence of the major chunk of its population over the same.

Virbhadra Singh said that the SAARC forum could become the powerhouse of economic strength in the world if its interest in the north-western Himalayas were looked forward with the initiatives in tourism, energy and water development since all these sectors were critical ones for the economy. He said that with regard to the issues of mobility and connectivity with special reference to communication and information sharing, Himachal Pradesh can benefit enormously if the information flow on trans-national river systems was made a standing arrangement. He said that the state had suffered heavily in the absence of such information when the Satluj river was flooded heavily causing devastation of life and property on its banks.

Chief Minister welcomed the delegates from all the SAARC countries attending the two-days long conference being organized in Shimla and expressed hope that the core issues of mutual interest would be addressed and fruitful outcome delivered at the closure of the Conference. He said hat the deliberations of the forum by its delegates would make the conference successful in its endeavour to make the SAARC an effective instrument for regional co-operation and mutual understanding, thereby leading to greater prosperity of all the member states of the region.

Vinod Kumar Sharma, General Secretary SAFMA welcomed the delegates and the dignitaries while one member from every participating SAARC country addressed the inaugural ceremony and K.K.Katyal, President, SAFMA proposed vote of thanks.