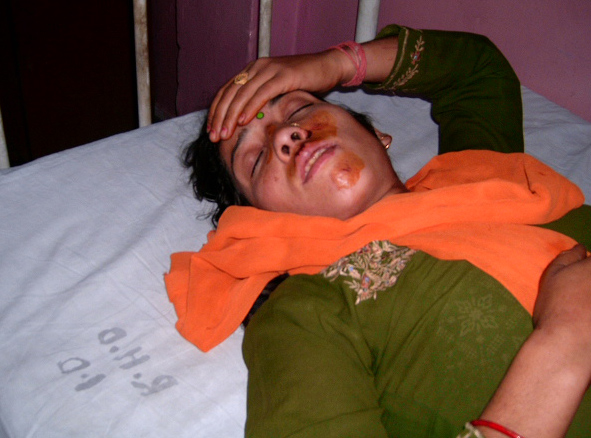 NAHAN: Hundreds of residents of Dadahu, a small town situated at a distance of 35 K.M. from here turned up to the Dadahu Referral Hospital last night to protest against the â€˜carelessness and deplorable attitudeâ€™ of Doctors and other Para Medical staff of the hospital.

Trouble started at around 9.00 P.M. last night when some residents spread this message that a women injured in an accident was waiting for treatment for over three hours in the Hospital compound and was in serious condition. A mob of local residents led by President of Dadahu Panchayat Mr. Mahesh Aggarwal and Vice President Amit Kumar Bhardwaj entered the Hospital compound and Gharou the Hospital staff for more than two hours. The situation turned worse when people came to know that Doctor was absent and Para medical staff also did not attend patient Shayama Devi resident of village Chooli in Dadahu Sub Tehsil.

As per Panchayat representatives Shayama Devi got injured in an accident. She had a fracture in the great toe of the foot and injuries on the several parts of the body. Her injuries were bleeding even at the time of arrival of local residents. They alleged that she was brought at 6.00 PM in the Hospital for the treatment but was lying in the Hospital compound without getting any first aid even after three hours. Another lady patient was also waiting for her treatment for long time in the Hospital compound. Agitators did not allow Hospital staff to leave the premises and contacted higher officers of Medical Department and District Administration.

However Panchyat representative did not allow any person to misbehave or manhandle the Hospital staff. Smelling the seriousness of the situation S.D.M. Nahan Mr. Sumit Khimta, took an immediate action and asked Doctor and Naib Tehsildar Dadahu to rush to the Hospital immediately and resolve the public grievances. He also appealed the Panchayat representatives and other imminent residents of Dadahu who contacted him, to maintain peace at any cost. He also assured residents that the matter would be investigated. After getting the assurance of SDM people decided to end the two hour long gharou of the Hospital Staff.

Shyama Devi was admitted in the Hospital last night and was referred to Nahan district Hospital this morning. Mr. Amit Kumar Bhardwaj, Vice President of Dadahu Panchyat in a statement released today demanded high level inquiry in to the incident and strict action against the erring doctors and Para Medical staff. He has appealed Chief Minister of the State to take immediate step to improve the pathetic condition of the Referral Hospital and post more doctors and other staff in the Hospital as per sanctioned strength.