The historic town of Sujanpur tira of Himachal Pradesh that once remained second Kingdom of great Katoch rulers of Kangra hills is suffering from government apathy. No concrete steps have been made to restore its glorious past. It continues to be the headquarter town of Sujanpur tehsil and a nagar panchayat manages its affairs.

Leading historians of India and foreign countries have written much about this historic town and its famous Holi. The Beas River flows by it and its beauty on entering the town and later on the crumbling Tira forts attracts one.

The big Chaugan also attracts the attention of the people coming to the town during the mela. Such huge grounds are rare in hilly areas of India. This maidan is, however, losing its glory due to encroachments on its all sides.

The Tira forts located atop a hill nearby the town are at present in the state of neglect. Neither the district administration nor the descendants of Katoch rulers bother about their upkeep. Two separate boards one by the owners of the ruined forts and another by the department of ASI have been put outside the forts to show that it was an ancient fort during the Katoch rulers.

The district of Hamirpur having inherited its name from a descendent of a great Katoch lineage Raja Hamir Chand. 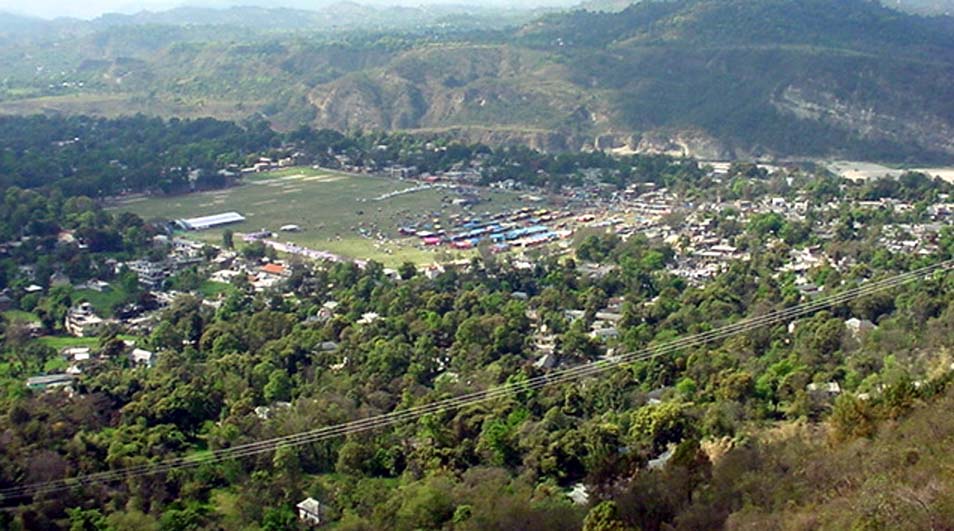 On a nearby hill at Tira is a temple dedicated to Chamunda Devi that still attracts a large number of devotees. At the southern end is the temple of Gauri Shanker that houses life-size statues in ‘ashtadhatu’ of Lord Shiva and his consort Parvati.Every ‘Holi’, colours were added to the waters of a huge tank within the fort, which used to be celebrated with enthusiasm. The festival is still popular in the region.

The only Sainik School of the state is also located here. It is also a religious centre. The well-known temples are of Narbadeshwar, Gauri Shankar and Murli Manohar temple. This place is suitable for adventure sports like Paragliding, Angling, Rafting and trekking in and around this area.

The lanes, temples, forts and palaces of Naduan and Sujanpur Tira still echo with stories about Maharaja Sansar Chand Katoch, one of the greatest Katoch rulers, who had sought refuge at these places while fighting his adversaries. In 1758, overlooking the settlement of Sujanpur, Abhaya Chand, a Katoch ruler, built a fortified palace top of a hill. It acquired the name Tira and with time this ancient town on the bank of river Beas began to be called Sujanpur- Tira.

Being a great patron of art and culture, soon many famous artists flocked to his court. Till his death in 1824, Sujanpur- Tira and nearby Alampur were homes for the Katoch ruler where he indulged with arts and artists and has gone down in history as a true parton. There is the Barahdari hall within the fort of Sujanpur- Tira, which had twelve chambers for other rajas. Here, Sansar Chand Katoch used to hold his court.

The devastating earthquake of 1905 in Kangra region had left a broken piece of history in the remnants of this fort and its great palace at Sujanpur- Tira. Some of the temples of Sujanpur may have been built over again but the Narbadeshwar temple survived the seismic shocks. The walls of this temple have given refuge to some of the finest frescoes of the famous Pahari School of painting. Archaeological Survey of India is helping to conserve its rich treasure.

Raja Sansar Chand Katoch, unable to recover the famed Kangra fort, may have died a broken man but even in faded glory he had kept alive the famous school of Pahari paintings and is still remembered as its greatest patron. Many of these miniature paintings representatives of oriental character adorn the galleries of museums world over and have an emotive quality that appeal even today. The broken forts of Sujanpur- Tira and Nadaun and the shine of the frescoes on the walls of its temples and palaces with time may dimmed a little, the townships may have lost their importance but these places wait their turn to be discovered again.

The Holi of Sujanpurtira is organized to relive the Radha-Krishan legend. The festival became famous during the rule of great Katoch King Sansar Chand. The king was also instrumental in flourishing the Kangra paintings, which are still known worldwide.

The Holi of Sujanpurtira became famous when Raja Sansar Chand used to play Holi with his courtiers and members of their families. He used to invite all of them to his forts, where a small tank was constructed.

The tank used to be filled with colored water and the king used to throw this water as well as gulal on the people. Members of the royal family also used to play Holi with elites of the town.

Now the Holi of Sujanpur has become a political game. HP Chief Minister is invited to inaugurate the Holi festivals every year here. The Holi festival that used to be seven days affair has been reduced to three days due to paucity of funds with the organizers.

Thousands of men, women and children attired in colorful dresses throng the historic Chaugan here to take part in the state-level Holi festival that got off to a colorful start in March every year. They offer puja at the Murli Manohar temple and sought blessings of Lord Krishna and Radha.

The Holi of Sujanpurtira is organized to relive the Radha-Krishan legend. The festival became famous during the rule of great Katoch King Sansar Chand. The king was also instrumental in flourishing the Kangra paintings, which are still known worldwide.

The big Chaugan also attracts the attention of the people coming to the town during the mela. Such huge grounds are rare in hilly areas of India. This maidan is, however, losing its glory due to encroachments.

The Tira forts and the tank are at present in the state of neglect. Neither the district administration nor the descendants of Katoch rulers bother about their upkeep. The Holi of Sujanpurtira also invites pottery makers from various parts of the kangra, Mandi and this district.

Attired in colorful dresses, people visit the Murli Manohar temple and thereafter the temple of Baba Swaropgir, the savior of the town once they enter the town.

The historic Chaugan, spread over an area of about 1,050 kanals here is â€œshrinkingâ€ thanks to the indifferent attitude of the state government and the local people. The maidan used to be the parade ground of Katoch rulers of the erstwhile Kangra hills. The Katoch kings used to see the daily parade of their army from the Tira forts located atop the Tira hills.

Presently, the sole Sainik School of the state stands on one side of the ground while the local people have encroached upon its other sides. Owners of cars, two wheelers and other vehicles often use this maidan as a car park and training ground.

Stray cattle can be seen roaming the grounds to forage on its rich grass. Raja Sansar Chand from England imported the grass.

There is a demand for opening a sports college at Sujanpur Tira and to convert Chaugan into multipurpose stadium.