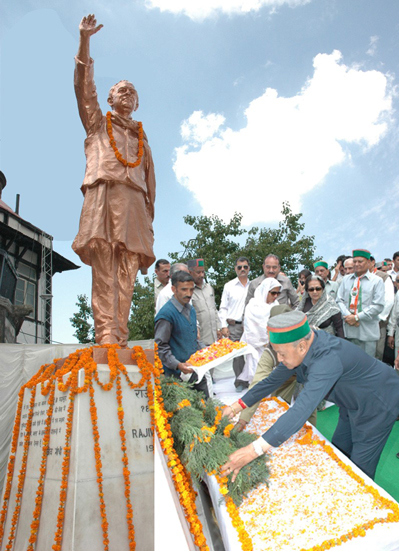 Virbhadra Singh, Chief Minister led the State in paying floral tributes to the dynamic and visionary former Prime Minister, late Mr. Rajiv Gandhi, on his 16th Death Anniversary which is being observed as the Anti-Terrorism Day in the country. He laid wreath at his statue at Sadbhavna Chowk at Chhota Shimla today.

Chief Minister administered pledge of Anti-Terrorism and Nonviolence to reiterate the resolve of the nation to eradicate terrorism from the country and to work for the communal and social harmony collectively.

Virbhadra Singh said that late Rajiv Gandhi had prepared the nation to enter into 21st century by developing information technology and allied necessary infrastructure to match the global standards. He said that the visionary leader sacrificed his life for the national integration, maintenance of peace and communal harmony. He said that late Rajiv Gandhi’s contribution would be remembered by the grateful nation for ages to come.

Devotional and patriotic songs were sung and ‘Prabhat Pheries’ were taken out in the town in the early morning.