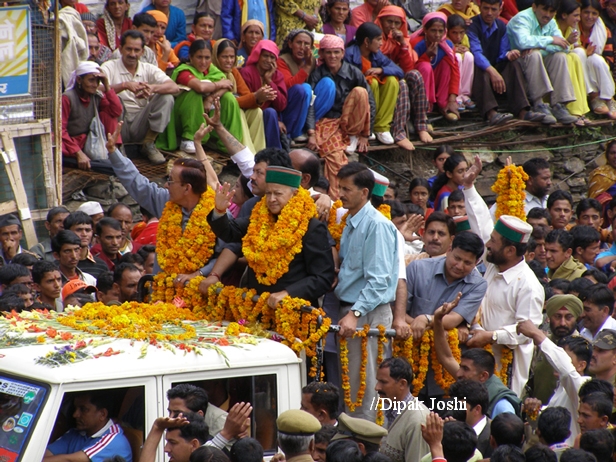 Virbhadra Singh, Chief Minister said that his Government had taken up the matter of covering all the districts of the State and other Special Category States under National Rural Employment Guarantee Scheme so that people were benefited in getting assured employment of 100 days in a year nearer to their homes. He was addressing a mammoth gathering in the closing ceremony of four-day long Dr. Y.S. Parmar Memorial Fair at Haripurdhar in Renuka segment of district Sirmaur today.

Chief Minister said that experimental implementation of the scheme introduced initially in Sirmaur and Chamba districts had helped adding two more districts of Kangra and Mandi under the scheme. He said that the national programme was bound to revolutionise the rural economy and provide people a minimum of 100 days employment within a radius of five kms.

Virbhadra Singh said that 36 of the 68 assembly segments had been covered under the NREGS and he was hopeful of getting the scheme extended to rest of the segments for which request had already been made to the Prime Minister. He said that in last one year, the scheme benefited a large number of people who were provided job guarantee cards and were made eligible to avail benefit of employment under the programme. He said that the scheme would benefit the people in rural areas immensely.

Chief Minister said that his Government was paying added attention towards the socio-economic upliftment of the vulnerable sections of the society and community specific schemes were formulated for their upliftment. He said that rural areas and weaker sections of the society had been the focal point of all the policies and programmes of his Government so that development could benefit the people at the grass-root-level.

Virbhadra Singh said that poor people were in need of basic amenities, employment, house and some land to cultivate and earn their livelihood. He said that Gram Panchayats needed to select the beneficiaries with utmost care by rising above all political considerations so that poorest of the poor were benefited. He said that the panchayats had responsibility to deliver benefit to the deserving people in all conditions.

Virbhadra Singh congratulated the organizers and people of the area for celebrating Dr. Y.S. Parmar Memorial Fair for the last 25 years successfully which was gaining popularity with every passing year. He said that such fairs were instrumental in strengthening universal brotherhood besides contributing significantly towards preservation of rich cultural heritage of the State.

Local MLA welcomed the Chief Minister. He said that Government was paying added attention towards the development of Renuka segment and detailed out the developmental activities in the area. He urged Chief Minister for opening a Sub Tehsil at Haripurdhar which would benefit population of 22,000.