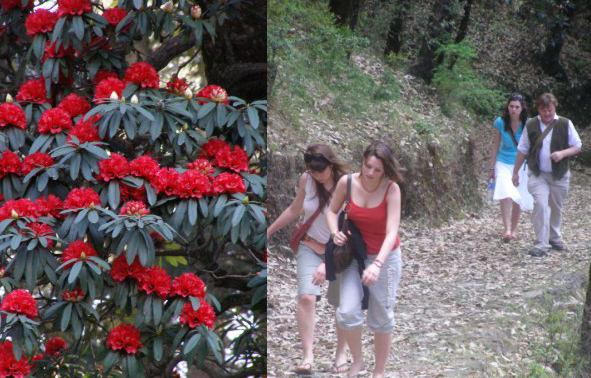 You must have visited Shimla city a times but mind it, itâ€™s all new this summer. A fairy tale like experience in the lush green woods, where heavenly Rhododendron flowers offer you red carpet welcome. This is not the story of concrete laden smoky Shimla city. Itâ€™s a clear cut and well known fact that hills queen have nothing more to expose to the beauty starving eyes of tourists coming from all over the world.
However a cleaver step undertaken by forest department has opened the doors to a new cultivated world. Much forbidden â€˜Glain forestâ€™ is now open for the admirers of natural beauty. Special feature of this jungle is, that now a day it is blooming with the charming red flowers of Rhododendron. This nearly two square kilometers heaven, adjoining the capital city of Himachal Pradesh is a busy place these days. A large number of tourists are coming daily to have fresh air in this green world.

Enthusiastic forest department has started the construction of a track in the woods, so that people may reach to the farthest ends of this mini wonderland. This path has been given the name of â€˜Buransh Pathâ€™ after the Rhododendron flowers, which are called â€˜Buranshâ€™ in local dialect. This can be classified as a much meditated action of the department because it was under acute pressure to save the forest of the hills queen. That is way; the green belt of city was handed over to the department from the Municipal Council. After the success story of Galain, department is all set to open some more beauty woods for the tourists.

A couple of days ago some 30 students of Halbay School of United Kingdom were enjoying to the inner most core of their hearts in the blood red Rhododendron woods. On the vary same day London based Tony and Frazer told that they have never experienced such sage of nature. Mr. Vineet , Conservator of Forests Shimla said that some more new paths are in the pipeline around the city.