Himachal Pradesh Government was making available quality drugs free of cost to the patients suffering from tuberculosis through all the Government health institutions, besides creating awareness amongst the masses in different modes, associating NGOs, village-level functionaries with the educational campaigns, to arrest the emergence of tuberculosis in the State. This was revealed by Virbhadra Singh, Chief Minister, after he flagged off the awareness rally of the medical and school children from the historic Ridge Maidan at the State-Level function to mark the World Tuberculosis Day here today. 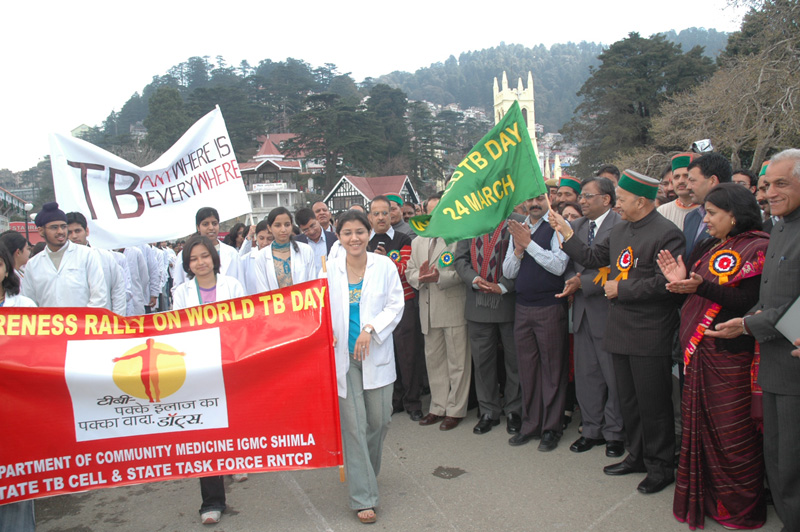 Chief Minister said that the State had best health indicators and was committed to make Himachal Pradesh a healthy State in all respects by controlling the fatal diseases like HIV AIDS, polio, tuberculosis etc. He said that both the medical colleges were also being involved in implementation of the awareness programme so that the message was delivered to the targeted groups from every possible channel. He said that to prevent Multi Drug Resistant Tuberculosis (MDR TB) an Intermediary Reference Laboratory has been established at Dharampur which has helped in saving the time, money and inconvenience to the patients and was available in Delhi only. He said that out of the 115 identified patients of MDR TB, 32 had completely been treated while others were under treatment.

Virbhadra Singh said that TB was preventable and curable disease which had been declared as global emergency. He said that among the most effective steps in prevention of TB was to cure infectious cases in order to break the chain of transmission. He said that to overcome all such hurdles, a revised strategy had been evolved and National TB Control Programme launched in the State from 1993. He said that 2,645 Directly Observed Treatment Short Course DOTS centres had been established in the state where the medicine was being administered to the patients in the presence of medical functionaries. He said that 88,906 TB patients had so far been treated in the State while the latest detected cases were under treatment. He expressed satisfaction for achieving the 88 percent cure rate in the State and 81 percent detection rate against the global objective of 85 percent and 70 percent respectively.

Chief Minister said that intensive education campaigns like Patientâ€™s Provider Meetings, Community Meetings, School Activities, sensitization of panchayati raj institutions, mahila mandals and opinion leaders were being carried out in the state to deliver the awareness message in every nook and corner of the State. He said that educational institutions were the best to educate the young generation about the gravity of the disease and the precautions required to be taken to prevent the same and all-out efforts were required to be made to sensitize the young people.

Virbhadra Singh said that the State had best health infrastructure, two medical colleges in Government sector and many other in private sector where quality health facilities were available. He said that the State hospital had also been strengthened where MRI and Open Heart Surgery facilities were also being provided to the people within the State. He said that new OPD block was also being constructed separately in every major hospital to facilitate the outdoor patients to avail of the convenient health care facilities.