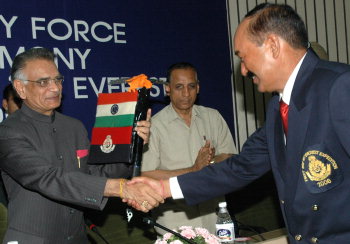 Negi is Born on 08th March 1950 in Nesang village in Himachal Pradesh’s mountainous Kinnaur district. 57 year old Negi was the leader of 14 member BSF Mountaineering team which was flagged off by Honâ€™ble Home Minister Sh Shivraj Patil on 08th March 2006 from New Delhi. 06 members of the team have already scaled the peak on 20th May 2006.

â€˜One is never too old for adventureâ€™, it fits perfect on a senior Border Security Force (BSF) official, who is the oldest Indian to climb Mount Everest.

Life begins at 40 they say, but for S C Negi, the adventure began at 50. An Additional Deputy

Inspector General of BSF, 56-year-old Negi is the oldest Indian to climb Mount Everest. He is also the highest-ranking official to accomplish the feat.

In May when Negi first decided to lead a 14-member BSF Mount Everest expedition, it looked a tough call.

“Most of team members were half my age. I was 56, beard and all white. I had lot of difficulties enroute â€“ the age caught up, your system may be very good but muscle power with age loses,” said Negi.

It was Negi’s disciplined life style and the rush of adrenalin that helped him. A resident of Kinnaur in Himachal Pradesh, his love for the hills and snow also worked in his favour.

But at over 29,000 feet, his age did catch up though his mind never wavered. And the Great Everest dream egged him on.

“For a mountaineer Everest is a Mecca, it is an ultimate (for) anyone who enters this field â€“ normally people at a young age. But for this chance came in very late,” said Negi.

The Everest challenge is over. Negi is now training for a post-monsoon Kanchunchenga expedition next year.

At 56, Negi has done what many youngsters would not even dare. But there still many more heights to conquer and many more dreams to live.