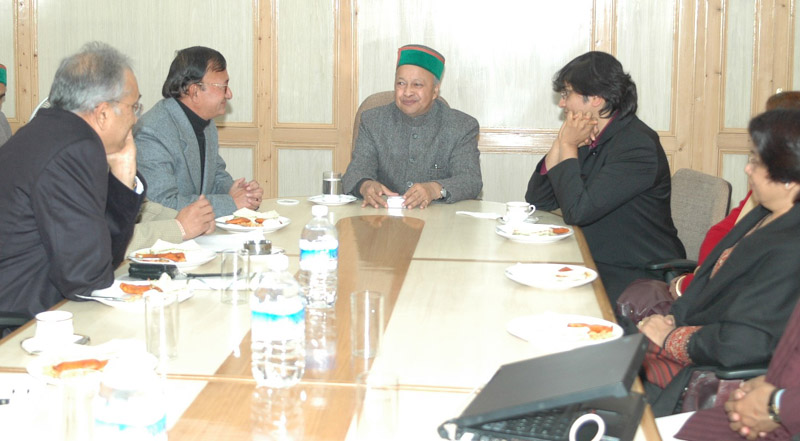 Multifaceted Nano-biotechnology Project of United States of America has submitted its proposal to the state government for investing in the bio-technology sector in the state and manufacture world class equipments in the state with global marketing prospectus. This was revealed by Dr. Anita Goel, Chief Executive Officer and Managing Director of the Nanobiosym , a Nano-Biotechnology Company based in Boston, United States of America, who headed her high level delegation to the country and called on Shri Virbhadra Singh Chief Minister, here today.

Virbhadra Singh said that the state had good governance, stable government, uninterrupted power supply, cheap land, pollution free environment and to add a special industrial package for safe investment in the industrial friendly state in the country. He said that the state had succeeded in attracting vast multinational investment during last three years which had given a renewed momentum to the industrialization in the state. He said that his government had been extending all possible help to the entrepreneurs to set up their units in the state and get the codal formalities completed without wasting much of their precious time. He said that prestigious information technology houses had also opted to set up their units in the state keeping in view the most suitable conditions for the production of their products. He said that the state was expecting more such investments in the near future. He added that experienced and competent people were also coming forward with their proposals to set up centres of par excellence learning in different disciplines of studies in the state to make the state an educational hub of the country.

Chief Minister informed Dr. Goel that the state would be welcoming their investment in the bio-technology sector and explore the possibilities of equity participation for which necessary modalities would be chalked out. He said that the state was prepared to provide suitable land and other facilities for early setting up of the project besides other assistance required by the company.

Shri J.P.Negi, Principal Secretary, Bio-technology informed about the Industrial Policy provisions of the state government and said that the bio-technology was the choicest industry for the state where the local raw material would be utilized and avenues of direct and indirect employment created to the educated unemployed youth of the state.

Dr. Anita Goel, one of the ten top experts of the Nano-biotechnology in the world, said that she had envisioned a project of over 400 million US dollars for the state to be carried in a phased manner to manufacture hald-held DNA based diagnostic chips development, fabrication, testing and integrated in United States of America with enormous market in both developing and developed countries. She said that the product would be based on DNA diagnostics which would enable highly accurate and reliable detection of any DNA or RNA based pathogen within minutes and could be used by minimally trained persons to test bloods, saliva or stool samples inexpensively, field-deployable, user-friendly and exceptionally well suited to diagnostic applications.

Dr. Goel also detailed achievements and said that after examining all aspects and thorough study of the state of Himachal Pradesh and its geophysical conditions his company had stepped forward to submit its proposal for setting up its unit in the state which would be instrumental in making Himachal Pradesh the leader in Nano-biotechnology in the world and open global doors for investment and employment prospectus. She looked forward for long association with the state and its people in execution of more such projects in the state. She said that she would be visiting various sites to find suitable location for the unit.