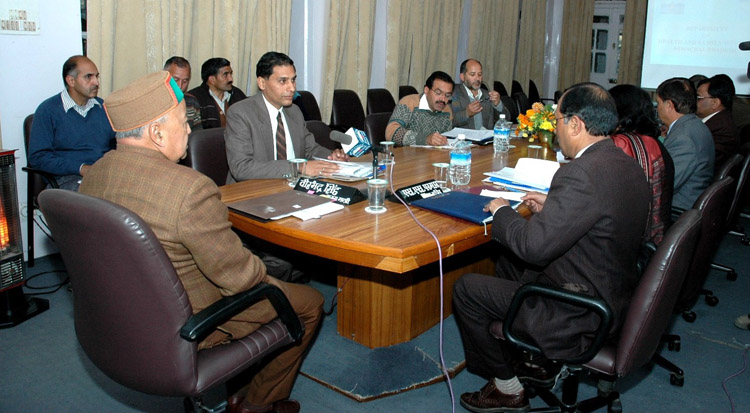 Shimla: The State Government would be considering the proposal of training private qualified medical practitioners in the field of anesthesia who could be available to the government medical institutions on phone calls to supplement the strengthening of quality health services to the people of the State. This was revealed by Shri Virbhadra Singh, Chief Minister, while reviewing the functioning of the Health and Family Welfare Department, here today.

Chief Minister said that the serving government doctors interested in learning the anesthesia application were also being encouraged to take up the course so that beside their other general duties they were able to perform the duties of an anesthetist in their hospitals. He said that the State Government would be exploring the possibilities to train the doctors who were in private practice for training purposes for a specific period of time with the condition that they would be available to local hospitals on phone calls. He said that after successful completion of the training and serving the local hospitals the trained doctors would be considered for regular appointments in the government hospitals after observation of all codal formalities and other conditions being equal for recruitment to the posts.

Shri Virbhadra Singh said that the State Government was considering bringing about a legislation to ban the illegal medical practice by the unregistered qualified medical quacks since massive complaints were being received by the State Government relating to their competence. He said that such people would not be allowed to play with the health of the people and cause numerous problems to the ailing persons by supplying them unbranded medicines.

Shri Virbhadra Singh said that the State Government was implementing the policy of awarding Rs. 5 lakh each to one-gram panchayat in each of the twelve districts of the state, which had best female birth rate relative to the male birth rate to bring about balance in the sex ratio and also check the female foeticide. He said that a cash award of Rs. 10,000 was being given to any person as cash incentive providing information about illegal female foeticide. He said that the Central Testing Laboratory at Kandaghat would be strengthened and provided with more skilled manpower so that the testing of the samples was carried expeditiously.

Chief Minister said that the department of Health and Family Welfare needed to ensure that the free medicine facilities were available to the IRDP and other deserving patients and possibilities also needed to be explored to make provision of displaying the available stock of free medicines in the respective hospitals. He directed the department to evolve a system to make the programme practical. He said that after dedication of the new Mother and Child State Kamla Nehru Hospital to the people of the State at a cost of Rs. 5 crore another block of equal amount would also be constructed thereby making the hospital and well equipped and self contained in all respects.

Shri Virbhadra Singh said that it was the duty of the every doctor and para medics to deliver the patients best of the health services available at their command besides dealing with them in a most courteous manner and guiding them properly. He said that the State had ranked first in health services and the department needed to put in hard labour to further improve its status.