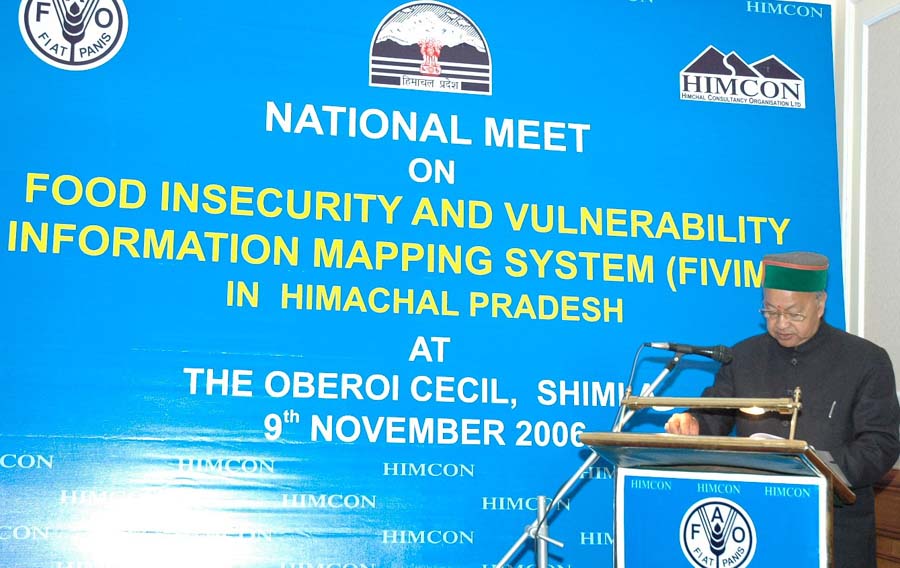 Food and Agriculture Organization (FAO) needed to take up Project on nutrition of women and children in Himachal Pradesh as the FAO in India provides regular support to many activities within its mandate, particularly in the field of Food Security and Nutrition. This was stated by Shri Virbhadra Singh, Chief Minister while inaugurating National Meet on â€˜Food Insecurity and Vulnerability Information Mapping System (FIVIMS) organized by Himachal Consultancy Organization Limited (HIMCON) in collaboration with State Department of Food, Civil Supplies and Consumer Affairs and technical support of FAO here today. He said that 10800 Aanganwadis were being opened in the State thus increasing the coverage of lactating and pregnant mothers, their nutrition and the care of newborn babies. He said that Aanganwadi workers required training in order to understand and implement the programmes better.

v 10800 Aangwanwadis being opened in the State

v Efforts being made to implement NREGS in Mandi, Shimla and Kangra districts soon

v Essential commodities being made available through a network of 4341 fair price shops.

Shri Virbhadra Singh said that State Government was alive to the need of rain water harvesting and has made it compulsory for a new building to have storage tank for rain water. He said that watershed development and other Projects by Rural Development, Horticulture, Agriculture and Forest Department have components of rain water harvesting. He said that Agriculture Department could also have to develop a new methodology of crop cultivation under more crop per drop. He said that Government was laying emphasis on production of off-season vegetables, potato and oilseeds besides increasing production of cereal crops through timely and adequate supply of inputs and effective dissemination of farm techniques. He also stressed upon the need for promoting pest management bringing more area under efficient use of water resources and implementation of wasteland development projects.

Chief Minister said that the endeavour of the Government was to ensure that every individual of the Pradesh would have the physical, economic, social and environmental access to balanced diet that include the necessary macro and micro nutrients, safe drinking water with Swajaldhara, sanitation with Total Sanitation Campaign going on, environmental hygiene, primary health care and education so as to lead a healthy and productive life. He said that FIVIMS was an excellent tool in our hand but it is essentially a tool, its functionality must, therefore, be seen and evaluated in the light of objectives for which it is put to use.

Chief Minister said that one of the main constituents of the State Government strategy for poverty alleviation was Targetted Public Distribution System (TPDS), which ensured availability of essential commodities like wheat, rice, levy sugar and kerosene through a network of 4341 Fair Price Shops. He said that the total families have been divided into four categories, viz. Above Poverty Line, Below Poverty Line (BPL), Antodaya ( Poorest) and Annapurna (indigent). Chief Minister said that there was an efficient and strong network of PDS system in the State which was supporting weaker sections throughout the year. He said that never in the history of the State death on account of hunger or non availability of foodgrains have been reported. He said that this shows the commitment of the Government towards weaker sections.

Shri Mark Smulders, FIVIMS, Coordinator, FAO Rome, while addressing the Meet said that during the year 1996, World Food Summit was held at Rome in which more than 150 Heads of States pledged to reduce by half the number of people suffering from hunger by the year 2015.