Chandigarh: Dams are fast becoming a cause for concern in the Kullu valley. They may not be as big as Sardar Sarovar, but, construction of a number of hydel projects are disturbing the valley’s fragile ecological balance. The power produced by these projects may benefit denizens of Delhi and othergrowing metros. But, the locals will have to bear the brunt of the development. That includes, less water at their disposal, and, threat to a number of endangered species.

The focus has returned to the cumulative environmental impacts of multiple hydels. Ironically, this has happened after the Himachal Pradesh high court banned construction of any hydel project on the Tirthan river in June this year. The court directed J P Negi, Principal Secretary, Non Conventional Energy Resources, to issue a notification to the effect. Strangely, the notification applies only to construction on Tirthan river, leaving its tributaries open to environmental abuse.

Since a number of mini hydel companies have applied for MOUs in Banjar valley region, locals are concerned that tributaries of Tirthan like Jibhi and Hirub Nala, the only watershed left in the Kullu valley that has not been dammed, will also meet the same fate sooner than later. This means protecting only Tirthan river, without giving similar protection to its tributaries and catchment areas, will turn out to be a futile exercise in ecological terms.”You can’t just save the head and not the body. The nalas are part of one living ecosystem and must be saved together,” says Padam Singh of Save Seraj Tirthan Nala Committee.

The sensitive environment of the Tirthan river habitat needs to be protected as a complete watershed system. “This is not only for their intrinsic natural and human aspects, but as a baseline for future understanding of natural processes,” says Payson, an earth scientist based in the region. The region houses some endangered species like musk deer, Western Tragopan and Chir pheasant and has the rich wealth of very old Deodar and Horse Chestnut trees.

“We have appealed to the government to stop all construction, not only on Tirthan but on other rivers too. We don’t want a repeat of what happened with the Parvati Hydel project. Not only trees but people are uprooted, disturbing their social ecology,” says director, Sahara, Rajender Chauhan. According to him, Tirthan tributaries go through the Great Himalayan National Park. “The government does not allow people to enter the national park, but, plans to carry on construction inside it. We will not let this happen.” 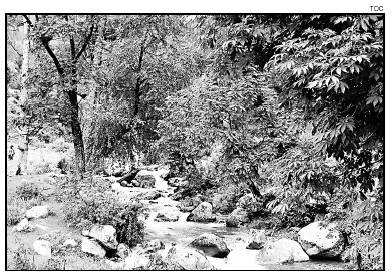