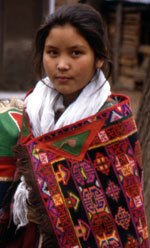 As the name suggests Spiti Projects works in Spiti valley of Lahaul and Spiti district (county) of Himachal Pradesh.

The Charity was set up by Joan Pollock in 1993. Joan started her career as a nurse. After qualifying in London, she worked in Canada before marriage and bringing up two sons. On returning to work she organised tours abroad, specializing in Asia and she soon made India her second home. As a Fellow of the Royal Geographical Society Joan is committed to environmental and conservation issues and is totally committed to helping to improve the health, hygiene and general wellbeing of the people of the Spiti Valley.

In 1992 Joan was in Manali, Himachel Pradesh, India visiting her medical student son who was doing his elective training at The Lady Willingdon Hospital. During her stay Dr Laji Varghese invited her to a slide show, which turned out to be of the Spiti Valley. Joan was overwhelmed by the beauty of this isolated valley and the desolation of the people and when asked by Laji if she would help to raise money to build a hospital in Kaza, she could not turn it down. And so the Spiti Projects were born.

Here are some unique and much needed projects they are involved with:

The local people gave the land and offered their services free to help with the building. Gradually the money was found and the hospital was built. It is now up and running with outpatients, intensive care ward with 4 beds, pharmacy, x ray facilities. There is an operating theatre with full sterilization equipment. They are currently raising money to build an extension as an intensive care unit for post-operative patients.

The construction of Mane school was started in 2002. At that time there was no road to the village and all materials had to be brought by donkeys. The plan included five classrooms, a staff room, and a library dedicated to Natalie Pyke who sent over 60 boxes of books to Mane school. Solar lighting as well as electricity has been installed. The school is built in traditional style with a flat roof, wooden floors and low work benches where the children sit cross legged on a mat on the floor â€“ the natural way for them to sit. The double-glazed conservatory (Glass House) was added on the south side to give extra warmth in winter. The School was completed in July 2005. Together with seven enthusiastic supporters we attended the Inauguration on the 13th July â€“ considered to be an auspicious day by the monks. Three monks from Sera-je monastery in South India brought a Dharma wheel and Deer which was installed on the roof. The school was opened by the local Government Minister for Education and was also attended by The Nono (the local Prince), and Khemtul Rimpoche with 12 monks from Dankhar Monastery who blessed the building. Many of the local people came from the surrounding mountain villages to celebrate the opening of this school. The pupils dressed in traditional dress and performed folk dances, after which a magnificent lunch was served to all who were present.

Spiti Projects have introduced spinning wheels to the valley. We hope in time to supply one to each village. They cost Â£200 each and so far we have managed to supply 9 villages. There are 18 villages in the valley. The women are delighted with this new technology because they can spin the amount of wool in half a day which would otherwise have taken them 3 days to do. The advantage of this method is a smoother wool thread and therefore a better standard of shawl.

The Spiti Valley is a remote area high in the Himalayas situated on the Tibetan plateau with almost no rain and snow-covered for 8 months a year. Although originally Tibetan, it’s been part of India since the mid 19th century and virtually closed off from the World for most of the last 50 years.Geologically and archeologically Spiti is a living museum. When part of the continent of Africa broke away and drifted north and hit the Asian plate 80 million years ago, the Tetheyâ€™s sea was thrown up and the Himalaya were formed. Hence this area is known as the fossil park of the world. The mountains of this area are devoid of any vegetation, the rocks have been laid bare by the erosion of wind, snow and sun over thousands of years.The Spiti Valley is formed by the Spiti River which rises at the Kubzum-La pass and descends into the mighty Sutlej River which is 150kms down stream. The scenery is awe inspiring and has unforgettable beauty. En-route, the river receives waters from many side valleys. These valleys are narrow except in places where the width can be up to 3km, thus limiting the cultivatable land. Small plantations of willow trees and poplars are grown near the villages by the river to be used for house building in the local style. The hills are rich in herbs and rare medicinal plants which have been used in Tibetan Medicine for hundreds of years.

To find out more about The Spiti Valley and the activities of The Spiti Projects Charity, please visit the website.