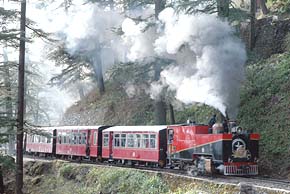 A 1905 steam engine runs on the Kalka-Shimla track on Sunday. The engine was regularly run on the track till 1975.

Covering 96.54 kms / 60 miles and traversing a gradient from 640 metres to 2060 metres, and zigzagging through 103 tunnels in addition to crossing over 800 bridges, (through the lower Himalayan range) this little toy train takes you on a spectacular nostalgic journey evocative of the British Raj.

The celebrations began on 9 November when the Railway Minister and 100 privileged invitees were hauled up to Shimla by the 1905 steam engine (KC-520) pulling the Kalka-Shimla Toy Train.

All the 20 stations enroute were decorated for the occasion. The Minister announced that World Heritage status had been sought for the train (the Darjeeling Hill Railway already enjoys this distinction).

The celebrations entitled a Shimla – a Journey to the Past went on for a week encompassing Vintage car rallies, Gaiety Theater festival (with students from the Lawrence School Sanawar performing) and bands.

Displays by the elite Mounted Cavalry and motorcycle daredevils displaying their skills on the Ridge, golf tournament at Naldera and cultural festivals were also an integral part of this week long celebration.

A commemorative stamp on the train was also released. A steam engine tourist package was on offer with the Railways running the train with the 1905 steam locomotive during the period.