This project is being implemented by SJVN Green Energy Limited (SGEL), a wholly owned subsidiary of SJVN Ltd.

Apprising the president of the project Mr. Nand Lal Sharma, CMD, SJVN said that it was being developed on 5000 Acres, the land for which has been purchased land near village Banderwala, in Bikaner of Rajasthan. 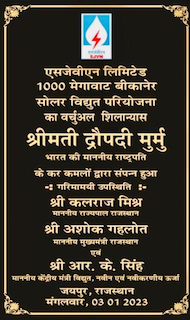 Being one of the highest solar yield areas of the country the project is to be developed at cost of Rs 5492 Crores, which also involves a Viability Gap Funding support of Rs. 44.72 lakh per megawatt to be funded by by IREDA.

The project is scheduled to be commissioned by March 2024. After commissioning this project will generate 2454.55 million units in first year and approximately 56838 MU would be generated on cumulative basis over a period of 25 years. The maximum usage charges have been fixed at Rs. 2.57 per unit, which will help in providing cheaper electricity to the consumers said Mr Sharma.

The project is expected to reduce Carbon Emission of 27,85,077 tons.

The power generated by the project shall be for self-use or use by Government/Government entities, either directly or through Distribution Companies (DISCOMS).