Why are so many well heeled people leaving India in droves, a kind of reverse migration since the Neanderthal man (along with a few women to give them the correct directions) came here from Africa and Europe?

So now it’s official: in one of those rare moments when Parliament functions the govt. revealed that 1,83, 473 Indians have given up their citizenship so far this year and emigrated to countries which do not aspire to become Vishwagurus. The number since 2014 is 1200,000. These are all HNIs (High Networth Individuals) who have dished out about a million dollars each to obtain the citizenship of the countries they have gone to. They would obviously leave nothing behind for either the PM Cares Fund or the Electoral Bonds, so that’s quite a few billion dollars of wealth that we have permanently lost.

Any sane govt. would have raised red flags about this near Biblical exodus and sought to know the reasons for it. But not our double engine- single driver run-away locomotive. So, for lack of anything better to do (since I’ve submitted my IT return, Life Certificate and KYC papers and linked my Aadhar to my PAN, bank accounts, voter ID, the last will and testament and the toilet paper holder), I thought I’d do my own analysis, without any reference to the Freedom House, Dem Institute, Reporters sans Borders, Association for Democratic Reforms, Martina Navratilova, Malala Yousuzai etc., all of whom, as we know, are part of the “tukre tukre” gang. Why are so many well heeled people leaving India in droves, a kind of reverse migration since the Neanderthal man (along with a few women to give them the correct directions) came here from Africa and Europe? I’ve done a limited survey of some of these people (the emigrants or PIOs in current parlance, not the Neanderthal men, who have disproved Darwin’s theory of evolution and are now all members of a certain political party) and have some of the answers.

It appears that the constant invitation by our “bhakts” to send people to Pakistan with free passage had unnerved quite a few of them. Now, Pakistan itself is not too bad, it’s easier to make millions there, especially if one knows someone in the army or Nawaz Sharif’s party, and the biryani there is even better. No, sir, the fear that haunted our HNIs is that tomorrow the proffered destinations might be expanded to include Somalia, Democratic Republic of Congo, Haiti or Tonga, all of which are going under fast, except Tonga which is simply going under water. The idea, therefore, is to skedaddle to fairer climes before the likes of Trump, Rishi Sunak and Giorgia Meloni stop immigration altogether, or before these countries return to the ice age as a consequence of Putin’s degasification plan for them.

There were/are other reasons too, as some of them have confessed privately to me. These include the prospect of Mrs. Nirmala Sitharaman becoming Finance Minister for another term after 2024, the likelihood of Mr. Yogi Adityanath being crowned as Prime Minister after Mr. Modi has done his fair share of “tapasya”, the possibility of Kangana Ranaut taking over the reins of power in Himachal after Mr. Shah has persuaded enough Congress MLAs there to see the fading light at the end of the Atal tunnel, the prospect of China occupying India even as the govt denies this from its government-in-exile headquarters in the Maldives , the possibility of the ECI ordering that henceforth all votes shall be cast by the EVMs themselves and the voters need not bother coming to the polling booths, or Vivek Agnihotri being conferred the Bharat Ratna. Now, these are all grim forebodings at which even Atlas would not have shrugged, but they are not the main reason. The real reason for the lemming rush lies elsewhere, as some of these folks have confessed to me, sotto voce, in a Sulabh Shochalay where they cannot be bugged as these places have no wi-fi or 5G, only “Do rupya jee.” 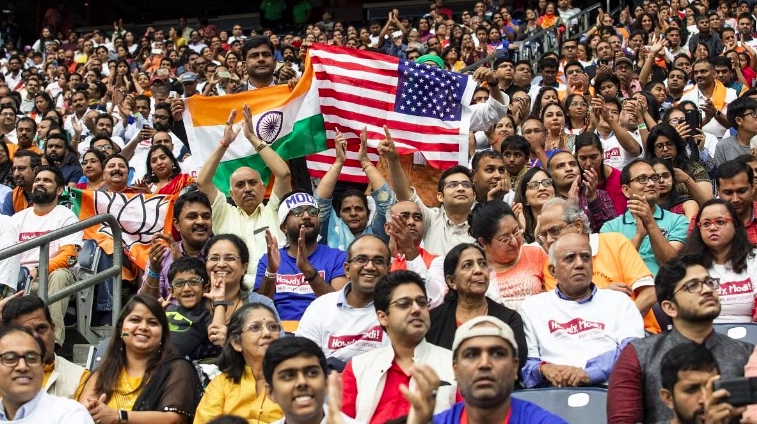 My research reveals that our HNIs are leaving because of a major uncertainty- no, not the economy, but the permissible colour of the underwear they can don. This is demonstrated by the ongoing brouhaha about the saffron colour of Deepika Padukone’s bikini in the movie Pathan. I’ve viewed the clip of the song (as have you, dear reader, perhaps a few dozen times ?) and have noted that though the bikini doesn’t cover much of Deepika, it has got a lot of coverage itself! The majoritarian fury over the bikini is just the latest instance of an all consuming fetish our friends on the right seem to wallow in. It is called “clothing fetish”, it may or may not have a sexual angle but it clearly stems from a feeling of inadequacy in the presence of women, if you get my drift, which no amount of chanting ” Joote maro salon ko !” or bashing up minorities or razing mosques can dispel. Quite clearly, bikinis don’t make their hearts or anything else leap up in joy as daffodils did for the poet. Or do their protests hide something deeper- could a bikini be a Freudian slip, if you’ll excuse the pun?

These guys are obsessed with women’s clothes and their entire weltanschauung seems to revolve around them. First it was jeans and tops in colleges, then salwar-kameez, then the hijab and burqua, and now its the bikini. They just can’t seem to make up their weakened minds about what women should wear. And it’s not just the garment, it’s also its colour. Deepika’s saffron bikini has caused them huge offence (though I personally felt that the sight of her in that thong on the beach resembled a golden Aphrodite rising from the waves, but then I’m aware that not many of these bikini watchers have a flair for Greek mythology). Which too would have been fine and not occasioned a mass migration: my PIO respondents said they could live without saffron underwear, but the question that arose was- which colour underwear could they then wear without raising any, well, hackles (to put it politely)?

There are no easy answers to this vexed question in Naya Bharat. Saffron makes the BJP acolytes see red, red would be objected to by the Communists, green would be denounced by Mr. Owaisi, blue would make Mamata Banerjee turn purple in the face, yellow would hurt the feelings of Akhilesh Yadav, and a combination of these colours would be an offence under the national Flag Code.

So you see the problem and dilemma which makes these HNIs leave in droves, don’t you- any colour underwear they don is likely to be objected to by some party or the other, and yet they desperately need underwear to hide their booty, as it were. I can sympathise with them; underwears are essential even if you don’t have any booty, they lift up your spirits if nothing else, they are like basic intelligence- you may not show it but you have to have it. Me, I always keep a second underwear in my golf bag when I go golfing, I never know when I might get a hole in one.