Kullu: In the nearly 400 years of the history of the world-famous weeklong Kullu Dussehra festivities, Narendra Modi became the first Prime Minister to pay obeisance to Kullu Valley’s chief deity Lord Raghunath in the festivity that begin in this Himachal Pradesh hill town on Wednesday amidst the presence of nearly 300 deities.

With the assembly of tens of thousands of devotees once again after a gap of two years of lockdown restrictions owing to the coronavirus pandemic, Lord Raghunath’s chariot was wheeled out from the historical temple in Sultanpur here on the first day of Dussehra or Vijay Dashami, the day when the festivities end in the rest of the country.

Breaking the security protocol, he attended the ceremony in the open and witnessed the procession from a podium amid blowing of trumpets and beating of drums for nearly one and a half hours. 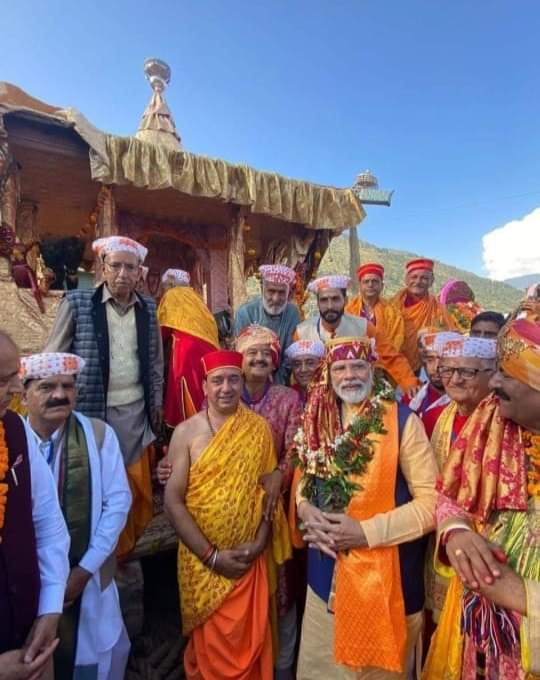 When the Prime Minister was paying obeisance to the chief deity, the task of managing the crowd at that time was only with Lord Raghunath’s second-in-command, the deity Nag Dhumbal.

Modi took blessings by bowing his head in front of Lord Raghunath.

“Since centuries, there is a tradition that Nag Dhumbal will clear the road and manage the crowd when the Lord Raghunath’s rath is being pulled during the processions on the first and the last day of the festival,” a government official associated with the festival told IANS.

The assembled deities during Kullu Dussehra, who normally range up to 250, accompany the chief deity during the procession.

This time they all stay in Dhalpur ground till the conclusion of the festival on October 11.

Before reaching Kullu town, some 200 km from the state capital, Modi dedicated AIIMS Bilaspur to the nation. He also inaugurated and laid the foundation stone of multiple projects in Bilaspur town, the hometown of BJP President J.P. Nadda.

The Kullu Dussehra festival concludes with the ‘Lanka Dahan’ ritual on the banks of the Beas river. All the assembled deities will participate, before they are carried back to their own temples in a beautifully decorated palanquin.

The festival traces its origin to 1637 when Raja Jagat Singh ruled Kullu. He had invited all local deities in Kullu to perform a ritual in honour of Lord Raghunath during Dussehra. Since then, the annual assembly of deities from hundreds of village temples has become a tradition.

After the abolition of the Indian princely states, the district administration has been inviting the deities.

According to a reference book compiled by the Kullu administration, there are 534 ‘living’ gods and goddesses in the Kullu Valley, which is popularly known also as Devbhoomi or abode of gods.

“Here, ‘devtas’ or gods command and the people obey. The gods here are not idols and enshrined in the temples; they are alive,” says the 583-page book compiled after a year-long research and field work.

The gods “live” among the people and “speak” to their followers and tell them what to do. They have families and relatives who join them in celebrations.

The book says the affairs of the Kullu gods are managed by the ‘devta’ committees that comprise a ‘kardar’ or manager of the temple, the ‘gur’ or oracle, musicians and a priest. It says every year over 250 gods and goddesses assembled for the Kullu Dussehra.

The gods accept invites of their followers and move to various locations as per their wish, says the book. Sometimes they decide to undertake a pilgrimage. Some do so after one-two years, others do so after 30 to 40 years and some embark on special pilgrimage after hundreds of years.

The ‘devta’ summons the ‘gur’ and speaks through him. The oracle goes into a trance and connects with the deity. The deity’s wish spreads and its followers are ready to obey the sacred command.

One member of each family has to join the deity’s procession. No one can lift the ‘rath’ or palanquin of the deity if he/she is not willing.

The book says the long and tough journeys are to be performed on foot. It takes days, even months. Strict rules and rituals have to be followed. The deity sets the time and pace of the journey.