Shimla: The saffron brigade soldiers are depending upon their General to win the electoral battle for them in Himachal Pradesh.

Facing strong winds of anti-incumbency, the BJP leadership in the state led by Chief Minister Jai Ram Thakur seems banking on Prime Minister Narendra Modi’s ‘charisma’, instead of flashing its own achievement card.

The party is holding a mass public meeting of Modi on September 24, the first of the three rallies planned ahead of the poll announcement, in Mandi town, the home turf of the Chief Minister, with an expected gathering of over one lakh youths.

Normally in every public meeting, Thakur, who is currently on an inauguration spree by travelling to every nook and corner of the state, is missing no opportunity to remind the public about PM Modi’s special bond and love for the people of the state where he spent a few years as the in-charge of the state’s affairs in the late 90s.

Getting nostalgic by speaking often in the local dialect, even Prime Minister Modi in his public addresses became vocal about his emotional bond and connection with the state that he says has had a very positive impact in shaping and giving direction to his life.

‘The Prime Minister has always bestowed his blessings on Himachal by offering so many developmental projects in the past five years. It is his charisma and the local connection with the masses which the state BJP is going to rely on to retain power,’ senior Cabinet minister Suresh Bhardwaj told IANS on Saturday, adding, ‘What is wrong in seeking votes on the name of the ‘pradhan sevak’ who devoted his life to the welfare of the people and good governance.’ 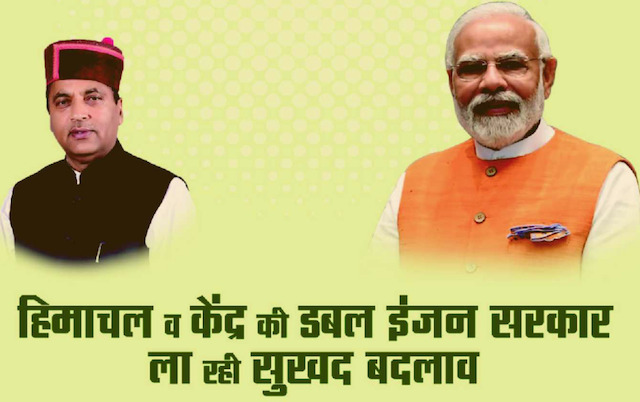 Modi last visited the state on May 31 to address beneficiaries of the Central government’s schemes to mark the eighth anniversary of his government from the historic Ridge — once the promenade of the British colonial rulers when Shimla was their summer capital.

He will be coming to the hill state again on September 24. This time he is coming to Mandi, the district with 10 assembly segments, the state’s second highest, to launch the BJP’s campaign for elections slated for the end of this year for the 68-member BJP-ruled assembly.

Earlier, he addressed a rally in Mandi on December 27, 2021, to mark the fourth anniversary of the state government.

According to Bhardwaj, the legislator from Shimla, in the last five years there is a double-engine government in the state and at the Centre and the speed of development and the implementation of schemes has gained momentum.

‘Himachal proposes projects and the Centre approves the funds. Recently, the Centre approved a bulk drug park for Himachal, a major achievement for a small state. There are several projects and schemes that Himachal has benefitted from. If I talk about urban development, Shimla and Dharamsala have benefitted from the Smart City Mission while AMRUT-I and AMRUT-II are there for other cities.’

‘Not only this, Modi-ji wears a Himachali cap during his foreign sojourns, which also brands the state across the globe,’ an optimistic Bhardwaj added.

For Chief Minister Thakur, who is quite younger to Modi, Himachal is the second home of ‘our Prime Minister and he is always excited to visit it’.

Expressing gratitude to Modi for sanctioning a bulk drug park in Haroli tehsil of Una district, Thakur, in full page newspaper advertisements last week, said Himachal is the only northern state to get this prestigious project.

‘The bulk drug park will not only accelerate the pace of industrialization in the state but will also generate employment opportunities, thereby leading to a significant boost in the prosperity of the region,’ said Thakur.

Apart from Himachal Pradesh, housing Asia’s biggest pharmaceutical hub, the Department of Pharmaceuticals has given ‘in-principle’ approval to the proposals for pharma parks in Gujarat and Andhra Pradesh.

Thakur in a recent interview to IANS said it is due to the ‘double-engine government’ that the state has got six government medical colleges and one in the private sector, apart from the completion of the Atal Tunnel and sanctioning a PGIMER Satellite Centre in Una and AIIMS in Bilaspur.

He said the government is spending over Rs 1,300 crore annually on providing social security pension to the needy as compared to only Rs 400 crore spent by the previous state government.

‘Our HIMCARE, Sahara Yojna, Ghrihini Suvidha Yojna and Shagun Yojna have been providing much needed relief to the needy and poor,’ he added.

Thakur said the Prime Minister has visited the state seven times. ‘Under his leadership, we will start electioneering with renewed energy,’ he said while inaugurating developmental projects in his Seraj assembly constituency in Mandi district on Friday.

Political observers told IANS the focus of Modi’s September 24 rally ahead of the Assembly polls, which are slated later this year, is to keep his party’s ‘double engine government’ on track by recapitulating the milestones the state achieved through the Centre’s welfare schemes.

Aiming to make it one of the biggest rallies of the Prime Minister, state BJP chief Suresh Kashyap told IANS that over one lakh people below the age of 40 will attend the rally.

‘Youths at the booth level will be mobilised to participate in the rally, while others would also join virtually,’ he said.

Despite the Aam Aadmi Party (AAP) striving hard to make inroads ahead of the polls, the political scenario in Himachal Pradesh seems so far largely bipolar — a tug-of-war between the two conventional arch rivals — the Congress and the BJP.

Himachal Pradesh was traditionally dominated by the Congress and saw its first non-Congress chief minister, Shanta Kumar, in 1977, when the Janata Party came to power.

Unlike her husband who had a direct connect at the grassroots, Pratibha Singh has spearheaded the poll campaign in a bid to oust the incumbent Jai Ram Thakur-led government by saying people are highly upset with its poor performance.

She often blames the BJP for banking on the popularity of Modi to win the polls as it did nothing for the people’s welfare.

The Congress is banking on its promise to bring back the Old Pension Scheme (OPS) that will benefit 225,000 employees, a crucial vote bank.

The Congress is banking mainly on an anti-incumbency wave against the ruling dispensation. It won three Assembly and one parliamentary seat in the October 2021 by-polls.

Chief Minister Thakur believes good governance with zero corruption, which is essential for economic growth, and no witch hunting are the mantras for his success. Unprecedented development will remain the party’s main poll plank for the forthcoming polls.

The BJP had won a majority in the 2017 Assembly polls with 44 seats in the 68-member Assembly.