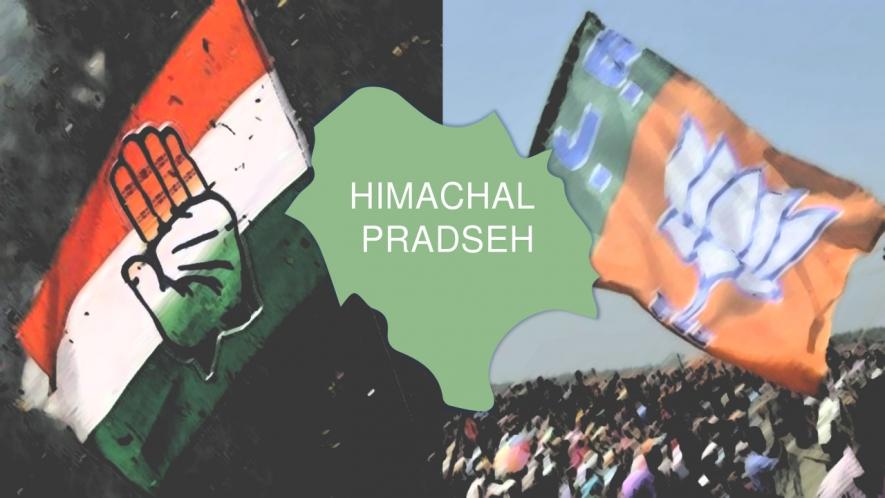 After the early 1980s, Congress, the main opposition party in the state will be contesting the elections without its stalwart – Virbhadra Singh,  a six-time former chief minister. With Singh’s demise in July 2021,  Congress is facing a leadership crisis as the party braces up for the state elections.

Firmly entrenched in Delhi and after winning Punjab, the Aam Aadmi Party (AAP) is all set to contest the Himachal elections with its full strength.

Incumbent BJP chief minister Jai Ram Thakur, with his team of inexperienced strategists, is battling several headwinds in his bid for a repeat term in office, something that electoral politics in Himachal Pradesh has not had since the time Dr YS Parmar, the states first chief minister, resigned for office in 1975.

The ruling party fraught with infighting, fending off strong pressure groups demanding return of the Old Pension Scheme, outsourced employees pushing for a policy of being recruited into regular government jobs, inflation and unemployment is not enough to protect the outward calm that the state BJP is projecting. Observers count it as a lull before the storm breaks out.

With new leaderships emerging, the Congress-BJP duo-play awaits a keen contest in November-December with AAP hoping to make a breakthrough by capturing some seats that could prove to be the decider in the intense power play.

For the 2017 election, former chief minister Prem Kumar Dhumal was declared as the chief ministerial candidate during the election campaign but he lost at Sujanpur to his former protégé Rajinder Rana of the Congress. Over-throwing Shanta Kumar as the state leader in 1998, for two decades Dhumal was the unchallenged BJP leader in Himachal and did serve as chief minister for two terms.

Dhumal losing the 2017 election put him out of the leadership role that ushered in a new line of leadership. Not just Dhumal but several of his loyalists also lost the election. The old order did yield and with it many of Dhumal’s loyalists have been sidelined under the new leadership of Jai Ram Thakur.

By recently poaching two Congress legislators – Lakhwinder Rana from Nalagarh and Pawan Kajal from Kangra, intra-party rivalries in these assembly segments has only intensified

A former state BJP president Khimi Ram Sharma dumping the party and joining Congress brought the delicate caste politics in the ruling outfit out in the open.

Brahmins constitute only 18% of the state’s population as per 2011 census, but with JP Nadda, a Brahmin, as the national party president, the caste holds considerable clout.

If Nadda decides to stay on with national wing of the party Suresh Bhardwaj, a cabinet minister is the only other prominent Brahmin face the party has.

Shunting out Ram Subhag Singh as chief secretary in July and appointing RD Dhiman, just months before the upcoming elections, is pointed out as the hold Jai Ram has over the bureaucracy and a reflection about the stop-gap attitude with which the government is running state affairs.

Recently Thakur was under attack for having hurriedly made announcements about appointments to the state public service commission and then did backtrack the next day after the party objected. The farce reflected weakness.

However it was in the litmus electoral test for the four by-elections held in November 2021 that came as a shock to the ruling party. By-polls were held for the Mandi Lok Sabha seat and three assembly seats of Jubbal-Kotkhai, Fatehpur and Arki. Congress won all four elections.

For chief minister Jai Ram Thakur, who hails from Mandi district, the defeat at home was beyond any explanation.

Pratibha Singh, wife of late chief minister Virbhadra Singh, won the seat and made a comeback into state politics. Jai Ram survived muted calls for within the party about resigning and taking responsibility for the defeat.

Where BJP is banking on Prime Minister Modi to lift the party out of the morass that it finds itself in the state, the opposition Congress is up and about like a headless chicken, hoping to wrest power solely on an anti-incumbency sway.

Emboldened by the by-poll win, the old order that was down after the passing away of Virbhadra Singh is back at center stage after Pratibha Singh defeated a strong BJP candidate Brigadier (Retd) Khushal Thakur, a Kargil war hero, in the November 2021 election at Mandi.

With the number of aspirant chief ministerial candidates rising in the Congress, Pratibha Singh was appointed as the state party president in an attempt to put a lid on the contentious leadership issue till after the elections.

To placate competing factions Sukhvinder Singh Sukhu, a former state chief, was made head of the election campaign committee and Mukesh Agnihotri was retained as leader of the opposition in the state assembly. The compromise of keeping a hold over Pratibha Singh, Sukhu and Agnihotri is part of Congress’s time tested ‘appease all, promise none’ policy.

Others in the ring for the chief ministers post include former ministers Ram Lal Thakur, Asha Kumari and Sudhir Sharma.

Balance Of Power Could End Up With AAP

After Punjab, AAP hoped to repeat its electoral victory in Himachal. Party supremo Delhi chief minister Arvind Kejriwal, Punjab CM Bhagwantt Man and  Kejriwal’s deputy Manish Sisodia have made frequent visits to Himachal Pradesh but so far have not had a noticeable impact on the electorate, though the party is first of the blocks by having recently announced four election candidates, which includes a former BJP MP Rajan Sushant from Fatehpur.

If AAP succeeds in fielding some good candidates in select seats, it could prove a game changer. In the 2017 assembly elections  on 17 seats BJP lost on 11 and won (6) where the losing / winning margin was less than 4%.

A closely contested election could turn out to be a repeat of the 1998 election where a newly floated regional party Himachal Vikas Congress by former telecom minister Sukh Ram won 4 seats that proved critical in titling the balance of power in favour of incoming chief minister Prem Kumar Dhumal and defeating incumbent Virbhadra Singh after the results threw up a hung assembly.

Elections in the state are expected to be announced in Mid-October and Prime Minister Narendra Modi’s Mandi rally today set the tone.

There is more political theatrics expected in days to come which includes a chargesheet against the ruling party, more leaders crossing over to rival parties, mudslinging and all kinds of promises and assurances being made to woo the public.