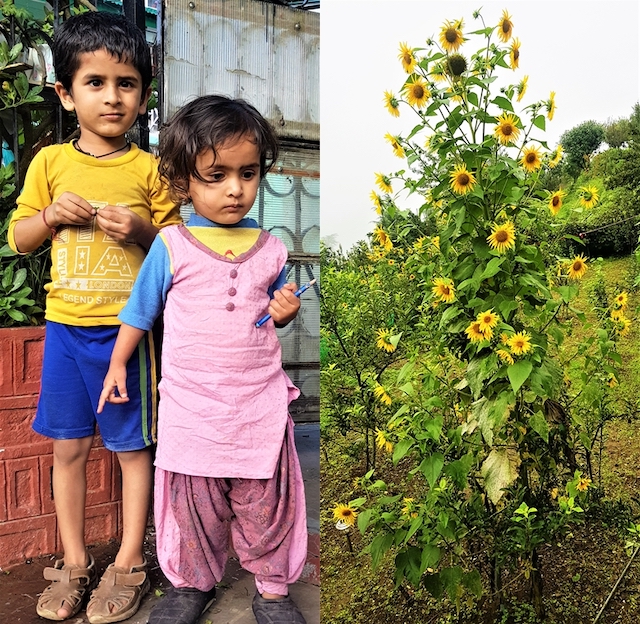 “MY SUN FLOWERS BLOOM”, chats BK on WhatsApp; luring me into taking a fresh look at his Farm House.

‘Road to a friend’s house is never long ’. Dass’s Bagicha* of Panthaghati appears a stone’s throw from my Cottage of Shantlok, Jhakoo.

The sunflower is often used as a symbol of green ideology, in much the same way that the red rose symbolizes socialism or social democracy. 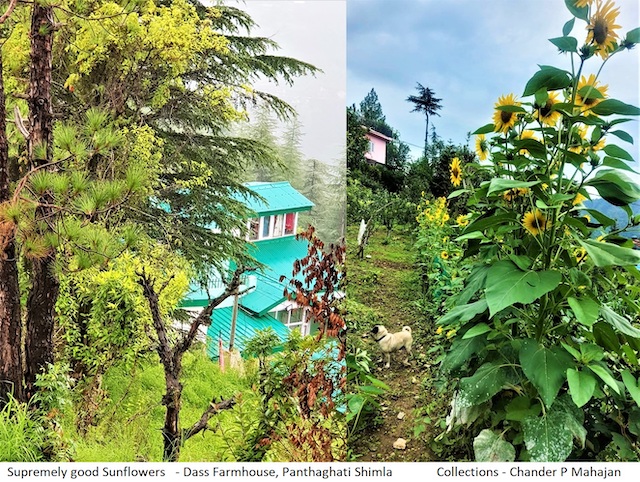 Fascinated by the majestic surajmukhi, envious, I ask for the ‘beauty’ in my garden. Transplanting the pulled-out nursery; as also a sprinkling of the heaps of seed, never worked – without full sun.

They are grown in gardens for beauty. “Flowers of different radiance and luster can be obtained with good traction and compost”, tells Dass.

The most common is yellow. The petals are yellow and in the center, there is a black-yellow or blueberry. What is commonly called a flower is the composite flower of several florets (small flowers) clustered together.

The belief is that at sunrise, most of the sunflowers face east. During the day, they follow the sun from east to west, while at night they return to an easterly orientation’; & this movement is represented by a flexible region of the stem just below the bud. A nod in affirmative is, however, awaited from Dass.

He is the proud grower. Both, he and his wife Uma do have green fingers. I wonder if this mammoth plant of its kind, with its massive foliage and colossal upright flowers, is the ultimate in Shimla and the suburbs.

Sunflowers symbolize unwavering faith and unconditional love. Because of their association with the sun, they are known for being “happy” flowers; informal, and optimistic.

“True friends are like bright sunflowers that never fade away, even over distance and time.” – Marie Williams Johnstone

With inputs from Er. B K Dass Sharma

His Farm House goes by Bagicha*