So the BJP national spokespersons, Nupur Sharma and Naveen Jindal have now been served the first serving of their just desserts. But anyone who thinks that this represents a course correction for the party has to have the brain of a guinea fowl and should admit that evolution has passed him by. The BJP is doing nothing of the kind, it is simply fire fighting the backlash in the gulf countries which provide employment to millions of Indians who repatriate US$ 42 billion every year to our coffers, are a major market for Indian goods, and supply 60% of our petroleum products. The BJP’s response was dictated not by any change of heart but by the potential damage to the business prospects of its sponsors. Because for a whole week it did nothing, even as protests erupted across the country and violence broke out in Kanpur.

Even more breath-taking was our Govt’s statement in response to the demarches issued by Kuwait, Qatar, Iran, Oman, Saudi Arabia and the OIC: it is nothing but a treatise in duplicity, dissembling and double-speak. It accuses these countries of divisiveness and a communal agenda. It speaks glowingly of the protection of minorities in India, their constitutional guarantees, our secular credentials- even as their persecution has become almost a state policy now. The most bizarre claim was that these inflammatory statements were made by “fringe elements” and not by anyone associated with the ruling dispensation ! Which begs the question- how can the Govt’s Ministers, MPs, MLAs, national spokespersons, who churn out this venom every single day, be considered as fringe elements ? In how many countries are “fringe elements” followed on Twitter by the Prime Minister, senior Union Ministers and a whole host of party functionaries? As someone said, this is a new concept in physics- when the fringe becomes the core. Not surprisingly, this crap did not cut any ice with the Gulf states ( to mix a metaphor) who are demanding an apology and punishment for the two spokespersons.

So far 18 countries have officially protested, as has the United Nation spokesperson. One cannot help but feel that it is not just the present blasphemous utterances of the BJP spokespersons but the govt’s track record over the last few years that has made these countries finally draw a red line. For it is now clear that, given the escalation in Muslim bashing that has become the new normal under this regime, the remarks against the Prophet were just a matter of time. The litany of Muslim persecution- bans on beef, halal meat shops, offering namaz, shops near Hindu temples, the hijab ; bulldozer justice, love jihad, conversion, judicial applications to dig up masjids and mosques, multiple challenges to the Places of Worship Act, one sided state action whenever communal violence broke out, Dharm Sansads calling for genocide- had become so persistent and its practitioners so emboldened, that it had to reach its apogee soon. Nupur Sharma was a disaster waiting to happen, that the statement came from her was just a happenstance, for it could have been anyone from a long list of arachnids encouraged by the party and the govt. all these years- Sambit Patra, Gaurav Bhatia, Prem Shukla, or anyone else of their ilk. This apogee has also, unfortunately for the BJP, become the tipping point for many countries. 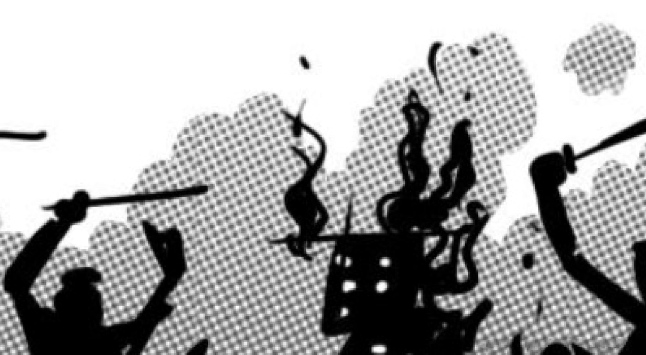 The suspension of Nupur Sharma and expulsion of Naveen Jindal is not only too late, it is also too little. Dozens of people, including journalists and intellectuals, have been thrown in jail for far lesser “offences”; these two should be criminally prosecuted. As should the anchors of the TV shows in which they were allowed to make such statements. Navika Kumar of Times Now who was the anchor when Nupur Sharma made the despicable statement, did not intervene to stop her from spewing venom- she neither stopped the BJP spokesperson, nor muted her, nor took her off the air. At the very least she should have asked her to apologise and should have tendered an apology herself. She did none of this; instead she later claimed that as this was a live show, she could have done nothing! It is also disappointing, but not surprising, that so far none of the media self regulators- except for the Editors’ Guild which issued a strong statement on the 8th of this month deploring the role of TV channels and their anchors in subverting our Constitutional values of secularism and comparing them to Radio Rwanda – have censured Kumar for her irresponsible conduct. The physical threats to Nupur Sharma on social media are reprehensible and should be dealt with with an iron hand. But I find it ironical that Nupur Sharma should now claim that her life is under threat- did she not put the lives of countless others at risk by her provocative remarks whose sole purpose was to incite hatred against the Muslims? This daily baiting and demonising of minorities on evening prime time shows has gone on for far too long. If the govt. means business it should use its powers to shut down these Spanish Inquisition type programmes immediately.

But my own personal feeling and assessment is that even this will not detoxify the poison that has been injected into our society and system over the last eight years. For the hatred, bigotry and religious intolerance has now gone into autonomous mode and can no longer be controlled by one central authority, the centrifugal forces that have been generated cannot be easily stopped. To understand this phenomenon one needs to refer to the theory of Cumulative Radicalisation propounded by the British historian Sir Ian Kirkshaw.

Kirkshaw’s theory was based on his study of developments in Nazi Germany in the 1940s. He postulated that this radicalisation begins with a Supreme Leader and quickly percolates down through the political executive, bureaucracy, judiciary and the media. The tipping point is reached when the ideology of hate, intolerance and unabashed majoritarianism infects the society at large. This becomes a kind of chaotic authoritarianism, as opposed to a Stalin kind of programmatic authoritarianism. At this point the vigilantes, social media trolls and non-state actors take over. Society is carved out into two parts- the Believers and the Silent Acceptors. The former now do the job of the ruling dispensation, thus providing the government a deniability to ward off any criticism.

This process is faithfully mirrored in the present imbroglio and explains the current state of affairs in the country. The BJP and its govt. at the centre have carefully promoted and nurtured an eco-system of hate in our polity and society, and is now no longer fully in control of what its followers and savants do. The hatred is no longer a command performance but has gone into autonomous mode, with every party functionary or group doing what he or they think the Supreme Leader wants or the party ideology demands.

This is demonstrated by the backlash to Nupur Sharma’s suspension, from the cadres and supporters of the BJP itself. There is widespread resentment among them at the action taken against her, with Mr. Modi himself being called out on social media for his ” pusillanimity.” Mr. Mohan Bhagwat, the RSS Supremo’s recent placatory statement that Hindus should not look for a shivling under every mosque, has also raised the ire of the Hindutva faithfuls, with one prominent seer even commenting sarcastically that age is making Mr. Bhagwat incoherent and confused. The party line and discipline is being breached, and therein lies the danger that cumulative radicalisation poses.

The BJP should realise that it has gone too far with its ideology of, and support of, Islamophobia. It is in danger of losing control of its own poisonous narrative, its deniability is eroding, our economy is under grave threat and the reputation of the country is suffering notwithstanding Mr. Jaishankar’s Alamo-type heroics. India has the largest immigrant population in the world- 32 million, of whom about 12 million live and work in Islamic nations. It would be the height of folly to denigrate Islam at home and expect our citizens to prosper in Islamic countries, or to expect these countries to be our trading partners and quietly ignore what is happening to their co-religionists here. In an increasingly globalised world we have to be sensitive to global concerns even if we treat our own citizens with contempt. It’s time to call off the Rottweilers and return to sensible and equitable governance, before the dogs turn on their masters.

The govt. would do well to go back to the drawing board and relearn a basic postulate of governance- that in a globally integrated world, one cannot separate domestic policy from foreign policy. Hubert Humphrey had put it very well when he stated that ” Foreign policy is really domestic policy with its hat on.” Wise words, but it’s difficult to put on your hat when you have both hands on the controls of a bulldozer or are caught with your pants down.