“Keep some souvenirs of your past, or how will you ever prove it wasn’t all a dream?”

In today’s day and age renovating houses or giving them a facelift is all about fancy home decors , uplifting and upgrading to the new styles and more of staying in compliance with the updated versions and ideas as well as discarding the old unwanted stuff .

In the times of these frequent makeovers and refurbishment, my retired fauji dad’s house on the hills has maintained the uniformity of staying evergreen throughout the years .
Here old order has not paved way for the new , but rather old heritage and legacy has been maintained and is proudly on the display.

Though many have labelled his outdated ideas as a hindrance to change and progressive views but he bluntly differs on this subject, as ‘ objects’ here in question are his ‘Aan, baan and shaan ‘ I mean his self respect , esteem and pride in the form of his invaluable assets .

Apart from few furniture pieces collected across N-E-W-S part of the country, the whole living room is dedicated to the ‘mementos’ collected/accumulated over the years, which are proudly displayed on the glass shelves with see through panels and on the centre and side tables as well.

Being posted to every nook and cranny of the country has immensely contributed towards these treasure trove of memories.

During postings, moving from one state to another , one box amongst the rest in the truck loaded with the numerous wooden boxes and trunks, was sincerely devoted to these uncommon antiques marked by exclusivity.

As it was only presented by the Fauj to it’s faujis, at their dining outs.

But in the recent times , despite of our numerous endeavours and attempts to replace these relics with the more happening and contemporary showpieces, which are hassle free and low in maintainence , the mementos still rule the roost , as if conveying firmly to us and in stern words, that nobody dare intrude or encroach their territory otherwise be ready to face the dire consequences.

Though it has been an uphill task to maintain these so called remembrance souvenirs from the various army stations across the country, as getting a help at this place is a luxury in itself for a retired defence personnel.

But this has not in any which way, brought his morale down, as now he truly believes in self help and with equal zeal and vigour every month performs the herculean task of dusting and conducting very religiously the brasso polish of his extensive collection of mementos.

But as pandemic opened the ‘ Pandora’s box’ for many , to run errands or doing daily chores, became more like an obstacle run and a constant’ tug of war’ which put dad in a Catch-22 dilemma.

As the attention diverted to fulfil the basic needs , the upkeep of the mementos took a backseat as it became more of an ‘ Achilles heal’ for him.
And so the resting period of these so called ‘outdated objects’ had to be prolonged for a while , eventually resulting in layers of dust and cobwebs submerging them.

The beautiful reminders of various peace and field tenures served since the time he joined the forces were now lying in neglect. 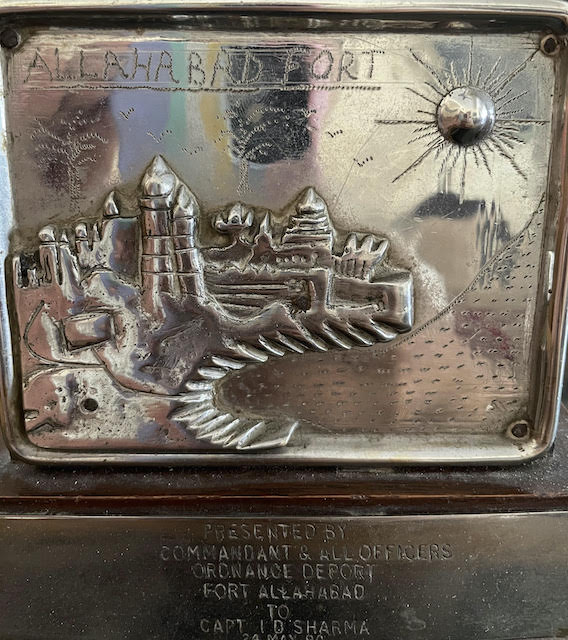 There were times when in the past they were very immaculately placed on the topmost shelf of the wooden structure in the allotted army accommodations . I have grown up seeing these mementos and their display in most of the army houses, as they became a mark of uniformity and constancy in most drawing rooms of the fauji houses .

The drawing rooms of yesteryears , are now referred as the living areas of today which are buzzing with unique and ‘in vogue ‘ decorative pieces of present times.

Every time I see the very first memento presented to my daddy, depicting the Allahabad (now Prayagraj) Fort and the rising Sun carved out on a metal with a wooden frame, I get nostalgic and reminiscing the good old days and numerous stories encompassing these keepsakes begin to float around again.

At every new station, to unbox and unwrap these tokens of love was so very cathartic and gratifying experience.

Now when I see these year wise showcased timeless and prized possessions holding the topmost post at my dad’s hill house and uniformly distributed at each and every part of the living area, it makes me immensely ecstatic at the sight of these ‘frozen delightful moments’ called ‘mementos’ and now when dad like a ‘jolly good fellow’ again takes over the long pending task and makes them spankingly new with his ‘Midas touch’,  a detailed narrative follows along with never ending anecdotes associated with these cherished possessions. And very smoothly one is transported down the memory lane.

Though mom has also contributed with her fair share of ‘ladies meet’ and ‘family welfare’ trophies towards these shelves of memories but her benefaction is slightly overshadowed by dad, as he outshines her every time with his persistence, perseverance and diligence.

When it comes to making the ‘mementos’ sparklingly radiant, pristine and as good as new , dad does it flawlessly and one is left bedazzled as well as speechless every time he accomplishes the ‘Sisyphean task’