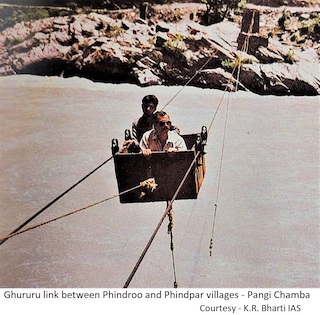 Many a ropeway rides are a once-in a lifetime opportunity. I rode to the ‘Top of the world’ (top of Europe) way back in 1999, enjoying views of the most iconic and beautiful places on to the Jungfrau# (mountain) in Swiss Alps. The Ice Palace at jungfraujoch remains the frozen nostalgia.

On my subsequent visit to Switzerland in 2017, I missed riding the new Eiger Express tri-cable gondola with a direct transfer option by train to jungfraujoch. Faster than before, it would have been a different feel of a thrill of the sort. The additional access would be the world’s longest tunnel-lift system, funicular^; UNESCO World Heritage – Jungfrau Region. 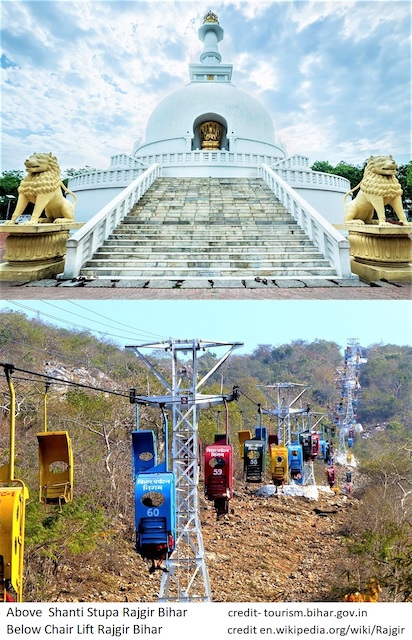 Scrolling my past, I catch up with my trolley rides at Shanan* Hydro station, Jogindernagar- Himachal; the funicular railways for Haulage, operating by cable with ascending and descending cars, counterbalanced.

While talking about the Titlis Rotair gondola (360° view) & the Cliff Walk (Switzerland), believed to be the highest elevation suspension bridge in Europe; I look back to my Froggy leaps over ‘Shour Jhoola’ (hanging bridge) of Pangi in Himachal Pradesh. 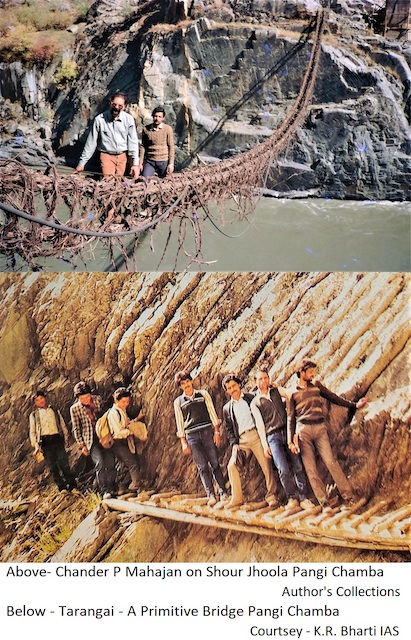 At times in sixties, I visited Gulmarg (Kashmir), when I was a student of Engineering in REC, Srinagar. Alas! Gondola cable at 13,400 ft. was not built, yet.

The gondola ride of the Merida Cable Car in Venezuela is said to be the highest in the world at fifteen thousand and six hundred and thirty-three feet at the highest point.

The Shinhotaka Ropeway carries 121 people in each cabin at Mount Hotaka in Japan. There are aerial tramways with double deck cabins.

The philosophy behind is- getting easier pilgrimage with the dual aim of providing eco-friendly and energy efficient Safe Alternate Transport Network; and development of tourism.

Accompanied by Vishav Kirti, Manu Maharaaj & Meenakshi, I was there, in 2010, at the Ropeway at Rajgir, Bihar; said to be the oldest in the country. It leads to the ‘Vishwa Shanti Stupa’ (Peace Pagoda), built by Japanese devotees of the Buddha on top of the Ratnagiri Hills.

The taking off of the Udan Khatola from Mansa Devi and Chandi Devi -Haridwar, Ambaji -Gujarat, Taratarini–Odisha Malampuzha-Kerala and elsewhere; affirms the mythological beliefs of the people.

Presently, under ‘Parvatmala scheme’, the National Ropeways Development Programme PPP (Public-Private Partnership) construction of 8 ropeway projects for 60 km is in the offing. Besides, transportation and connectivity on the mountains, it will also strengthen the border villages.

Prerna Singh of America also shares her hilarious experience of her joy ride at the ‘Dharamshala Skyway’ on a rainy day.

A 5-stage ropeway project 3S covering a 21.4 km, over the 14,000 feet Sach Pass is on its way; providing round the year connectivity to remote areas around the Killar region of Himachal Pradesh.

Most Ropeway Systems can go up to a speed of 10 mps (meter per second). When the cabin reaches station, it detaches itself from the continuously moving hauling rope and moves on the fixed structure and the speed is reduced to crawling speed or it comes to a halt while the passengers can de-board and board at defined areas in the station.

‘Quite unusual is a ropeway combining both freight and passenger transport. Such a system provides a supplementary solution to rising problems in areas with dedicated spatial challenges.’

Made in India ropeways come at par with world standards of safety. Apart from ensuring structural safety, it is crucial to have an emergency system in place to get the cable car back to the nearest station in emergency, safe evacuation can be done.

It is a preferred ecologically sustainable alternative to conventional roads in difficult hilly terrains as also in congested urban areas. The tricable gondola lift, also known as the 3S gondola lift, is a fast, modern gondola technology that, perhaps, can transport up to 6000-8000 PPH (passengers per hour).

While many gondolas are newer inventions, much has changed since, but the views remain the same. If heights scare, it is ‘Love for Thrills’.