Tarun Tejpal is the Devil’s Advocate for the underdog, the counsellor for the damned. His forte is the underbelly- of the government, society, passions, beliefs, long held shibboleths, blind traditions, religious dogmas, the legal fictions that make life comfortable for the elite and the privileged and hell for the others. It takes skill to describe the beautiful, but it requires exceptional talent and artistry to describe the ugly, and Tejpal has that in abundance. THE LINE OF MERCY is a monumental work, crafted by a scalpel not a pen, in which all the ugliness and hypocrisy of our society is laid open with a surgical skill that is both brutal and poetic in its breadth and depth. It does not always make for pleasant reading but then anything that makes one question our comfort zones rarely does. 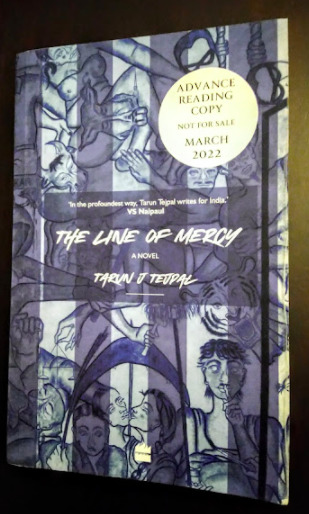 The essence of this book is captured in one line from it, one of the many aphorisms embedded in its formidable 700- odd pages: ” Mercy is the line across which live the weak and the defeated.” Tejpal focuses his penetrating powers of observation on finding out precisely where this line is drawn and who are the people on either side of it. Is it drawn inside the interrogation room of the police station? In the illusory safety and privacy of the bedroom? On the boundary between the fields of the warring families of two lovers? In the competing predatory instincts of the hardened inmates of a jail? In a courtroom in the space between an amoral lawyer and an indifferent judge? Between a promised “masjid” and a fait accompli “mandir”? Between a brutal truth and a comforting lie? Between a crime and a criminal? Between a god and his worshipper ?

Tejpal poses this question repeatedly ( he is wise enough not to answer it, that is the reader’s burden) and enlarges on it, in Canterbury Tales fashion, by creating a medley of characters residing in the underbelly of India like lice , invisible to most of us privileged in real life, noticed only when they sting or bite us. The stage for this panoply of actors is a district jail, the default universe for a significant part of our population, the updated version of Dante’s Inferno: Abandon Hope, All Ye Who Enter Here.

This book is our own version of Crime And Punishment, but on a much wider canvas and with the difference that there can be no redemption for the protagonists here. If only to continue the analogy, it could perhaps be more appropriately titled Alleged Crime And Certain Punishment, for in India it is not necessary for guilt to be proven before inflicting punishment. Tejpal imparts an entirely new meaning to the phrase Justice Is Blind and suggests that perhaps society could be served better if justice was not totally blind but had one eye cocked open. As he puts it: ” The angel of justice should be principally blind but should keep peering intermittently from under closed eyelids.”

The cast of characters in the book is simply overwhelming, and Tejpal narrates, with superb insights into the working of human emotions, the route followed by each one of them to the penitentiary. Not unlike the road to hell these roads too are paved, but with the bitumen of social injustice, poverty, illiteracy, rejection, patriarchy, ambition, misdirected passion, lust and plain bad luck. Notwithstanding what their Aadhaar cards may say, the dramatis personae are all rechristened in the cages of their new world, in recognition of their essential characteristics. And so we have Asambhav and Aranya, the eternal lovers whose Wagnerian passion for each other is an epic by itself ; Bichhhoo the triple murderer; Dr. Hagg, whose medications had killed two children. His real name was Damodar Desai but he was renamed because he had a propensity to lose control of his sphincters every time he was beaten up; Peter the Fist, the overlord of the prison wards in recognition of hands the size of watermelons; Godwin, the framed innocent and unloved son of a paranoid father and a mother who sets herself on fire to escape the daily forensic examination of her intimate parts by her husband; Barretto the pimp; Papa the baker; Aslam the sodomiser who also doubles up as the jail barber; Jogen Jabda and Atoum Bumb the dwarf, who began life as runaway kids in a circus; Andha Kanoon, the plumber who beat his wife and her sister to death and was so named because he was turning blind in his cell, Babu the Hindutva fanatic. There are also Google Baba, the inevitable Hitler, Bobo, Singham the cop, Sparkplug who marries his internet love via Skype from the jail. Each one of them is framed in tragi-comic terms in order to render the underlying pathos more acceptable.

It is a fascinating cast of characters, which more or less covers the mofussil world of India. Between them they encompass all the essential passions of mankind: love, jealousy, greed, paranoia, hate, family feuds, anger, power. They are cleverly chosen and constructed by Tejpal because they also reflect the social maladies and fissures that underpin our much vaunted civilisation and culture. As the author explains: “The social contract between humans everywhere is based on the commonwealth of lies. The lies of justice and equality. The lies of nationalism and common purchase.” The lies that ensure our jails will always be over populated with the guilty and the presumed guilty, the weak and the defenceless, the illiterate and the barely literate, the weirdo and the addict – fodder for policemen, wardens, lawyers and judges.

But where this book stands out in solitary splendour is in its practical contribution to Indian penology- the study of crime and punishment and of prison management. What Tejpal focuses on, however, is not the hardware but the software: not the administrative nitty gritty of prison management but the psychology and pathology that drives all those who live within its fetid walls. For the prison is a world alien to most of us, hidden away from our refined sensibilities. Tejpal lays it bare for us, from the inside out, like no Law Commission or Parliamentary Committee has ever done. It is a singular achievement which, to the best of my knowledge, has no parallel in Indian writing, English or any other language. Through the phenomenal cast of characters we learn of the caste system in prisons, hierarchies based not on the Vedas but on the heinousness of the crime, seniority of incarceration, propensity for violence, complicity with the jailors. We learn of the code of omerta and the protocols of violence. We learn how, even in this pit of despondence, there can be a rekindling of hope, love, religion. We see how the stoicism of Hindu philosophy can be relevant here when all other beliefs are shattered. The rules which govern the world outside also apply here, with the added sanction of permitted violence. There are fixers here, smuggling, pornography, bribery, beatings, despair, the paradoxical abandonment of hope along with the constant search for it in every arriving letter, Whatsapp message, a delayed bail hearing. You can demand justice here, says the author, but you cannot demand mercy. You have to learn to evoke it. You have to find out for yourself where the line of mercy is drawn, and then hope that you are on the right side of it.

The book is strung together with individual stories but these stories are not important in themselves. What is important is the world they construct, their raw material transmuted, with consummate skill, into a universe of the damned. The prison is the “chakravyuh” which one can enter with ease but can exit only as a corpse or a broken being or a serial criminal. Equally important are the uncomfortable questions the author poses- to the government, to society, to lawyers and judges, to the “thekedars” of religion, to us as individuals. But it is dangerous to answer them, for we shall stand exposed if we do.

Tejpal’s insights are as incisive as they are eclectic, for he delves into the pathology of justice, religions, communalism, marriage, political posturing and the many other legal fictions we live by. Where he has few equals, however, is in his clinical ability to put the idea and practice of love under a microscope and to dissect its various constituents. He is the taxidermist of passion. He can identify the parts that elevate and those that corrupt love. He casts away the latter like so much dross and leaves you with the pure essence of love, a noble trophy, as the ultimate prize. Sadly, however, as this book shows, this trophy is beyond the reach of most of us. But it is a worthy if romantic goal to aspire to for, as Browning writes: One’s reach must exceed one’s grasp, or what’s a heaven for? This is what makes a hopeless romantic, and the author for all his scathing cynicism and brutal exposition, is one such romantic at heart. Tejpal is as much of an unrecognized philosopher as he is a novelist, his insights into the labyrinthine corridors of human character, individual and collective, are deep and illuminating. But they do not engender hope. If this book had a sub-title it would have to be: Homo homini lupis est- Man is wolf to man.