[In medieval England a warm water bath in a tub was a luxury. So whole families would indulge in a community bath a couple of times in a month., all dipping into the same precious hot water. The kids came last, obviously, and by their turn the water in the tub was dark with dirt and soap, if not actually black. It is reported that sometimes a child could be not be spotted in the turbid grime, and when the dirty water was finally discarded, a baby or two was also drained out with it! This is the genesis of the saying “throwing the baby out with the bathwater.”]

This is a piece on politics or the legerdemain that passes as politics in India today. Quite a few friends and colleagues advise me not to write on politics, but to stick to the bureaucratic shenanigans I have been a willing part of. Now that’s problematic for me, much as I dislike these scoundrels, because politics and politicians intrude into every nook and cranny of our lives, and can only be ignored at our own peril. I remember the wise words of Cicero: you may not be interested in politics but that does not mean that politics is not interested in you. And so I return this week to my home state of Ulta Pradesh, and the impending elections there, with my two bits.

The waters in this Indo- Gangetic Bathtub have never been of RO quality, but over the last five years they have become of cess-pool quality; which was inevitable when an unrepentant fanatic was entrusted with governing the 8th largest administrative unit on the planet. It has become the worst-performing state in the country according to Niti Aayog itself, its once-vaunted bureaucracy reduced to scavenging for favours, its police a raptorial uniformed force. Baba Yogi and his party have not been able to deliver on any tangible because they have been too obsessed with the manufacture of hate and repression on an industrial scale, and the instruments of delivery, the civil services, have been rendered dysfunctional. But it would be unfair to single out the Baba Yogi alone: his job has not been made easier by the monumental failures of Mr. Modi, from outright dissembling to destruction of the economy, Olympian arrogance, cronyism, pandemic blunders, delusions of grandeur and encouragement of religious bigotry. 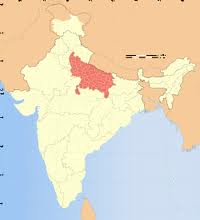 Modi and Shah have a monumental dilemma now in UP- they want to win the state desperately but don’t want Yogi around when they do so, lest he presents a challenge to the Supreme Leader and Sancho Panza in 2024. In all likelihood, their first wish will not be granted, the second will. Even the contrived “opinion polls” of the lap dog media predict that the BJP will lose between 150 to 170 seats from their 2017 tally, mainly to Akhilesh Yadav. Allowing for a margin of sycophancy of 25%, this translates into the loss of UP for the party. And the exit of the malevolent monk, hopefully not just into history but into oblivion.

It is not just the belaboured farmers or the betrayed OBCs or the oppressed Dalits who will upset the BJP’s apple cart. This time the youth will form a distinct constituency by itself, cutting across party, caste and religious lines. With the highest unemployment rate of all major states, practically no recruitments in the last five years, their protests being suppressed by unimaginable police brutality, they are poised to pose a major threat to the Yogi. The self-confessed Kshatriya has displayed utter contempt for too many sections of society for too long and will reap the whirlwind on the 10th of March.

Mayawati, by her characteristic opportunistic passivity, is hoping to play the kingmaker in case of a hung Assembly. She is likely to be disappointed too- her 20% traditional vote share contains a large proportion of Muslim votes, which are likely to desert her this time in favour of the SP. So will a section of her captive Jatavs, disillusioned with her repeated failure to take a position on atrocities on Dalits (as in the Hathras case). Her vote share could slip to about 14% or 15%- bad news for the BJP. The Congress is bound to increase its vote share from the 6% it got in 2017: it had contested a little more than 100 seats then but is fighting on all 403 now. If it manages to win about 15 to 20 seats ( a distinct possibility with Priyanka Gandhi’s appeal to women voters), it can then set the balance right if there’s a fractured mandate. This will also bode well for its challenge in the 2024 finals.

Of course, all this is postulated on the presumption that the elections are fair and transparent and that the Election Commission has the courage to ensure that., and does not do a repeat of its disgraceful conduct in the Bengal elections last year. EVMs do not appear to be an issue yet, but can become one if there is a ” mismatch” in the EVM- VVPAT tallies again, as had happened in 2019 and for which there has been no satisfactory explanation by the ECI yet. Also, that no conveniently (for the BJP) fortuitous incident of the Balakot/ Pulwama or Muzzafarnagar type takes place. The first signs are not encouraging: no attempt has been made to stop or penalise the Home Minister for his religion laced speeches in Kairana and Mathura; he is allowed to carry out his ” door to door” campaigning with hundreds of supporters while FIRs have been filed against the SP and the Chattisgarh Chief Minister for similar events. The Supreme Court continues to disappoint by its persistent reluctance to take up the challenge to the Electoral bonds (which enable the BJP to purchase the electoral mandate rather than win it) or to order a higher sample counting of VVPATs to check any mischief with the EVMs.

Notwithstanding this, however, UP appears to be impatient to decant the bathtub along with the Baba who has been wallowing in its toxic sediments for the last five years. I do hope someone is preparing a list of the officers and police officials who have been collaborating with him, beyond the call of duty, in the various excesses and brutality that have been the hallmark of this regime. They should be duly recognized for their more Papal than the Pope loyalty and suitably dealt with at the appropriate time.

As I write this, there is an ongoing debate about Opinion Polls. The Samajwadi Party, and some political commentators, have demanded that the ECI should immediately ban all Opinion Polls because they tend to influence voters. This they do- a recent study by Lok Niti reveals that the unattached or undecided voters, comprising a whopping 65% of an electorate, are indeed influenced by these polls, since they make up their minds close to the polling day. Further, 30% of voters tend to vote for the party being projected as the winner, since they do not wish to annoy the winning party/ candidate. Outside the urban areas especially, it is crucial to be on the right side of your MLA if one wants any work done. This is called the “bandwagon” effect.

It is also true that most Opinion Polls are tailored to suit the party that pays for them or the channel that commissions them- he who pays the piper will also call the tune, whether it is Abide With Me or Monica Darling. It should surprise no one, therefore, that practically all TV channels these days are proclaiming the BJP as the winner in all five states, whereas the reports from the ground tell a different tale altogether. ( Most Youtube channels, on the other hand, are predicting a drubbing for this party in at least four states !). 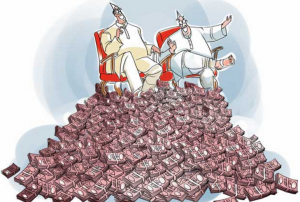 Most of these Opinion Polls are works of fiction Mr. Chetan Bhagat would be proud of. (Maybe he could consider writing a book titled ” Half Truth and One Arranged Verdict.”). That these polls are occasionally right is a matter of chance- even a broken clock gives the right time twice a day. They are used to blatantly shore up the TRPs and rarely reflect ground realities. Consider, for example, the range of predictions made by these pollsters in the Exit Poll for the 2017 UP elections: the BJP was given between 161-200 seats whereas it captured 323; the Samajwadi Party was predicted to win from 120-169 seats, it won only 47: the BSP’s forecast was even more off the mark- 57-90 while it actually won only 19. In any reasonable world these polling companies would have quietly folded their tents and slunk away into the darkness, but in India they reappear every five years with their mumbo jumbo, funded by you-know-who. In short, these polls have no credibility whatsoever and simply serve their sponsors’ purpose.

Notwithstanding all the above, however, my own view is that they should not be banned. The whole purpose of campaigning is to influence voters, isn’t it ?- by campaign speeches, manifestos, Man Ki Baats, inaugurations thinly disguised as official functions, advertisements and hoardings. And these are only the permitted activities; there is a whole arsenal of ” hidden persuaders” which we are all aware of. Secondly, reporting of election news, events, interviews, panel discussions, articles, analysis, etc.- all these also influence the minds of the voters. Should they also be banned?

If everything related to the elections is banned then how does the voter make up his mind? We should stop mollycoddling the voter and treating him or her like a babe in the woods, stop trying to ” protect” him from “evil” influences: he is 18 years old, lives in the real world and should know which button to press on the EVM. And he does know- time and again he has surprised us, gone by his own intuition and experience and not by the complex pseudo calculations of caste, sex, education, income, etc. which our pollsters would have us believe determine elections.

So, allow Opinion Polls to continue, till they are thoroughly discredited in time on their own. But they should be made more transparent. The ECI should direct that whenever such a poll is aired or printed it should mandatorily disclose: the agency conducting the poll, the organisation which has sponsored the poll and paid for it, the amount paid and by whom, its structure ( whether online or physical, the basis for selection of respondents, their numbers, the time period to which it pertains, sample size etc.). Put the naked facts before the public, and let it judge for itself whether the pollster or channel are wearing any clothes or not, and if so, of which colour.