Something curious seems to be happening in my home state, Ulta Pradesh or Attar Pradesh, depending on whether you are standing on your head or breathing deeply in Kannauj. The curious part does not refer to the Yogic Yogi doing the 100-meter sprint behind the Prime Minister’s bulletproof car on some expressway or to Mr. Amit Shah looking for criminals through binoculars even as they are all bunched behind him on the stage. No, sir, I refer to roses, or, to be more precise, the famous “attar” or perfume of Kannauj.

Most people who have still retained their sense of smell post-Covid would agree that Uber Pradesh’s politicians count among the most malodourous of the species. But these days they all appear to be smelling of roses- the “attar” of Kannauj has pervaded the politics of the state like never before. The BJP, of course, is hopeful that it will wash away the stench of all those corpses floating in the Ganges, while the Samajwadi Party is confident that it will attract voters to its symbol like bees to nectar. In hindsight I do feel sorry for the distraught Lady Macbeth- if only she had pinned her hopes on the attar of Kannauj instead of “the perfumes of Arabia” she could have gone to her maker with, literally, clean hands. Like the BJP is hoping to do once Ms Sitharaman manages to explain how ” the wall of money” was built in a state-run by her party, and also answers the question: wasn’t demonetisation supposed to take care of this?

But wait, do not get distracted by this Netflix version of The War of the Roses. Because I can detect another smell wafting through the state. I can smell a rat or a whole nest of rats standing up on their hind legs and begging many questions:

In these days of 360* surveillance and 24×7 snooping, how was it possible for a trader to salt away more than Rs. 250 crore in cash and gold from evaded GST ( that is, assuming that it was from his business and not hidden political bullion?) 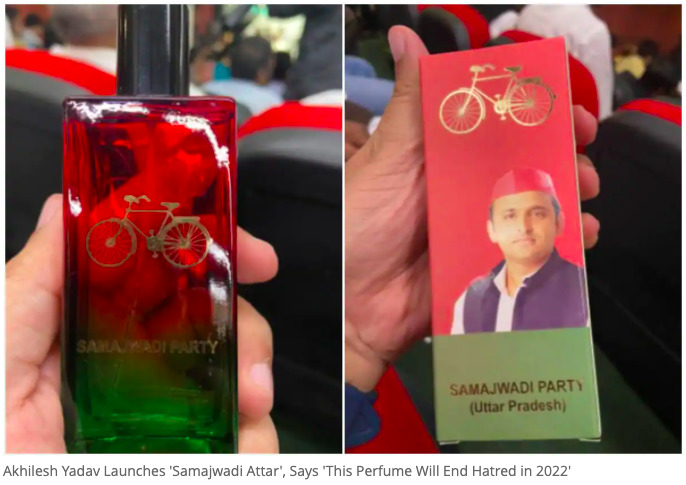 Why was the BJP so quick to link this seizure with the Samajwadi party? Was this the standard choreographed pre-election stunt- the modis operandi, to modify the usual term- which went wrong, as happens frequently when you try to be too clever by half and depend on a hollowed-out bureaucracy?

How is it that 25% of Kanauj’s total annual turnover of Rs. 1220 crores was recovered from just one non-descript businessman? In other words, was this stash ” business turnover” or electoral bonds second edition, just in case the Supreme Court wakes up from its stupor and decides to look into the matter?

Why did the DGGST change his tune suddenly and claim that the money was from the legitimate turnover of the company on which it would now have to pay tax, interest and penalty? Pretty murky, if you ask me, even by the standards of rodents and our police.

To find an answer to that last question we have to go back in history ( something the BJP is adept at) to Oscar Wilde’s comedy The Importance Of Being Earnest. It’s current Indian version is titled The Importance Of Being Jain and is as replete with lies, deception and misadventures as the original one. The catch, you see, is to find out who the real Jain is- Piush or Pushpraj? Which is the BJP one and which the Samajwadi one? The GST sleuths, it appears, did neither their homework nor their legwork, raided the wrong Jain and now have rat droppings all over their faceless faces. In order to save their feces they are now raiding all Jains, with a few Maliks and Chaudhrys thrown in to show they have an open mind on the subject. The comedy now playing out in Kannauj promises to be more entertaining than Oscar Wilde’s, to the tune of Three Blind Mice playing in the background.

So forget about the trademark essences and aromas of Kannauj, folks, the “mitti ka attar ” or “shamama” or “bela ka attar”. The flavour of the season is “nirvachan attar ” or election perfume, distilled in Nagpur and Etawah, mixed with alcohol, spiced with promises, and guaranteed to vaporise once the polling is over. In this witch’s brew, the rose petals are replaced with five hundred rupee notes, the sandalwood oil with sleaze and the faggots which fire the oven with bigots. The stench of politicians, the keepers of law and odour.