I have for some time been convinced that Moses ( of Old Testament fame ) was THE original bureaucrat. The anecdotal evidence is pretty convincing. He offered to his peoples the Promised Land, and then made them wander around in the desert for forty years. If this is not the classic bureaucratic run-around then what is? There’s more. He was adept at beating around the bush, till one of them caught fire and he called it an Act of God. He was wont to deliver sermons from raised platforms, which no one understood. But here’s the clinching one- he framed the first set of conduct rules, which subsequently came to be known as the Ten Commandments. And a fine set of rules they are too, except perhaps for that one about not coveting thy neighbour’s wife which contradicts a subsequent sub-rule which exhorts one to love thy neighbour, and we all know that the later rule supersedes the earlier one. There’s also a slight problem with the one that says thou shalt not kill, considering that the Israelis are doing precisely that to the Palestinians at almost the exact spot near Mount Sinaii where he announced his Conduct Rules. But we can hardly blame the Old Bureaucrat with events occurring after his superannuation, can we ?

The same latitude cannot, however, be allowed to his successors- no, not the state of Israel, but the IAS. Now, an IAS officer is at his best when he is drafting all manner of rules- if they are incomprehensible he is happy, and if they are unimplementable then he is overjoyed to an almost orgasmic level. I’d like to share a few I’ve had the mixed fortune to encounter in my career. 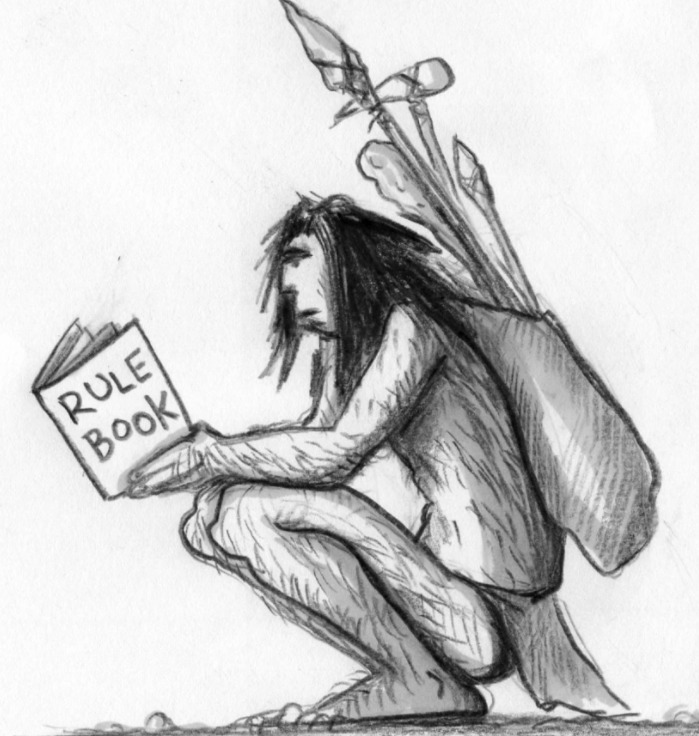 Have you ever wondered why civil servants, especially the more senior ones, are so short-sighted? It’s the rules, stupid! In the early eighties, I was posted as a Joint Secretary in the Finance Department in Shimla. Par of my onerous duties involved the approval of claims for medical reimbursement. In those days contact lenses were deemed to be a cosmetic procedure and not a medical one, the expenses were not reimburseable, even if you could not see beyond your nose without them ( probably on the premise that the less you saw, the safer you were). One day I received a claim from a High Court judge who had had contact lenses fixed, perhaps to better see his litigants, in the manner of the wolf in the fable of Red Riding Hood. I promptly rejected the claim and took the file to the Finance Secretary, expecting a pat on the back. The FS looked at me with a cunning grin and said: ” Approve it !” I was aghast, just as Moses must have been when he saw the Israelis worshipping the golden calf. ” But the rules, sir…” I squeaked. And then the FS explained:

“Avay,” he told me patiently, ” you must understand the hierarchy of rules. The most important rule in government is the rule of precedents. A precedent, once set, is sacrosanct, notwithstanding all other rules. Once you allow something to one person you cannot deny it to others. Generations of judges and lawyers have been able to put bread on their tables because of this rule. So let My Lord have his bloody contact lenses. And hereinafter all of us can also have contact lenses too. ” And that’s how contact lenses are now reimbursable, at least in Himachal. We now have more IAS chappies adorned with ruddy things than starlets in Bollywood.

Rule number Two. In 2007, after years of subsisting on bread and water (and the occasional box of sweets at Diwali), I finally built myself a cottage in Mashobra, intending to spend my dotage conversing with nature and picking up a few tips from the birds and the bees. I applied for a gas connection from the HP Civil Supplies Corporation for the new house. It was rejected on the grounds that two connections could not be given in the same name, and since I already had one in my official Shimla house, the rules did not permit one for Mashobra. Since the MD of the Corporation was my neighbour I pestered him till he came up with a solution. He informed me that he had checked his rules again and would be able to sanction a second connection if I gave an affidavit that my wife intended to divorce me and live separately at Mashobra! (This would obviously be in my wife’s name). I was completely stumped.

Firstly, we in the government cannot go around swearing affidavits with the same gay abandon that our MPs and MLAs do during election time. Secondly, I had no intention of separating from Neerja, having hung on to her for dear life for thirty years. Thirdly, once she started living separately she might begin to like it. I was told on good authority by officers who had gone to Delhi on central deputation leaving their wives behind, that the latter soon start enjoying their single status, and encourage their husbands to stay on in Delhi till retirement. And why not? They have all the perks of an IAS spouse, they don’t really need to bear with a guy who’d rather go to bed with a pile of files than a wife. Fourthly, Mashobra has a lot of retired defence officers who spend all their time looking for lost golf balls and single women and don’t at all mind playing their strokes on the wrong fairway.

No, sir (I told myself) this was not a good idea at all. I told Neerja. She asked for two days to consider the suggestion. Finally, of course, she also turned it down. She confided in me later that she was tempted by the idea but decided against it, because then who’d take the dog for a walk and make the bed tea in the morning? So finally we didn’t use that particular rule after all; instead, I went down to Lower Bazaar and bought a cylinder and regulator on the black market.

I am convinced that most IAS officers have very high levels of schadenfreude, not just testosterone, and love nothing better than to see the proletariat squirm; nothing less can explain this next rule. One of the consequences of having a large bureaucracy and an improving life expectancy rate is that you also have a large multitude of pensioners who refuse to kick the bucket. ( Come to think of it, why should they, when their pensions are more than their salaries; moreover, for govt. pensioners ( as opposed to the blokes from the private sector), the lack of any work after retirement is not traumatic at all since they never did any work while in service in the first place.

Pension rules stipulate that every by November every year a pensioner is supposed to submit a ” life certificate” attesting to the fact that he is still alive. ( Being brain dead is no disqualification, on the assumption that most of them were in this condition in any case while in service). This life certificate can be attested by any bank manager or gazetted officer. The system worked very well till a few years ago, till some bright Finance Secretary in Shimla decided that the attestation would have to be done by a Patwari ( Village Revenue Officer) instead. Bank managers, it was decreed, could not be trusted with a life certificate though they could with all our life savings.

Now, a Patwari in the mountainous regions of Himachal is a mythical figure. Though there are reported to be about 700 of them they are more difficult to spot than a snow leopard, of which there are barely a dozen; it’s easier to track down a Yeti than a Patwari, so good is their camouflage. But rules are rules, and so the mountain slopes are now crawling with pensioners looking for their Patwaris, usually in vain. Some have taken to camping in caves hoping to waylay him on a good day, others organise  “havans” hoping to be blessed with his appearance, still, others seek out astrologers to predict his movements. The more IT-enabled pensioners have started using drones to spot him ( I learn that they have been able to spot some new Chinese villages coming up on the border, but the Patwari remains as elusive as Bigfoot).

But the astute Finance Secretary, I’m told, is a happy man: the mortality among pensioners has gone up sharply, what with all the exertion now required of them, the outgo on pensions has fallen drastically to satisfying levels, and the budget deficit has finally come under control. The FS was even considered for the award of a Padma Shri, but it was finally given to Kangana Ranaut. She did, after all, discover the actual date of India’s independence.