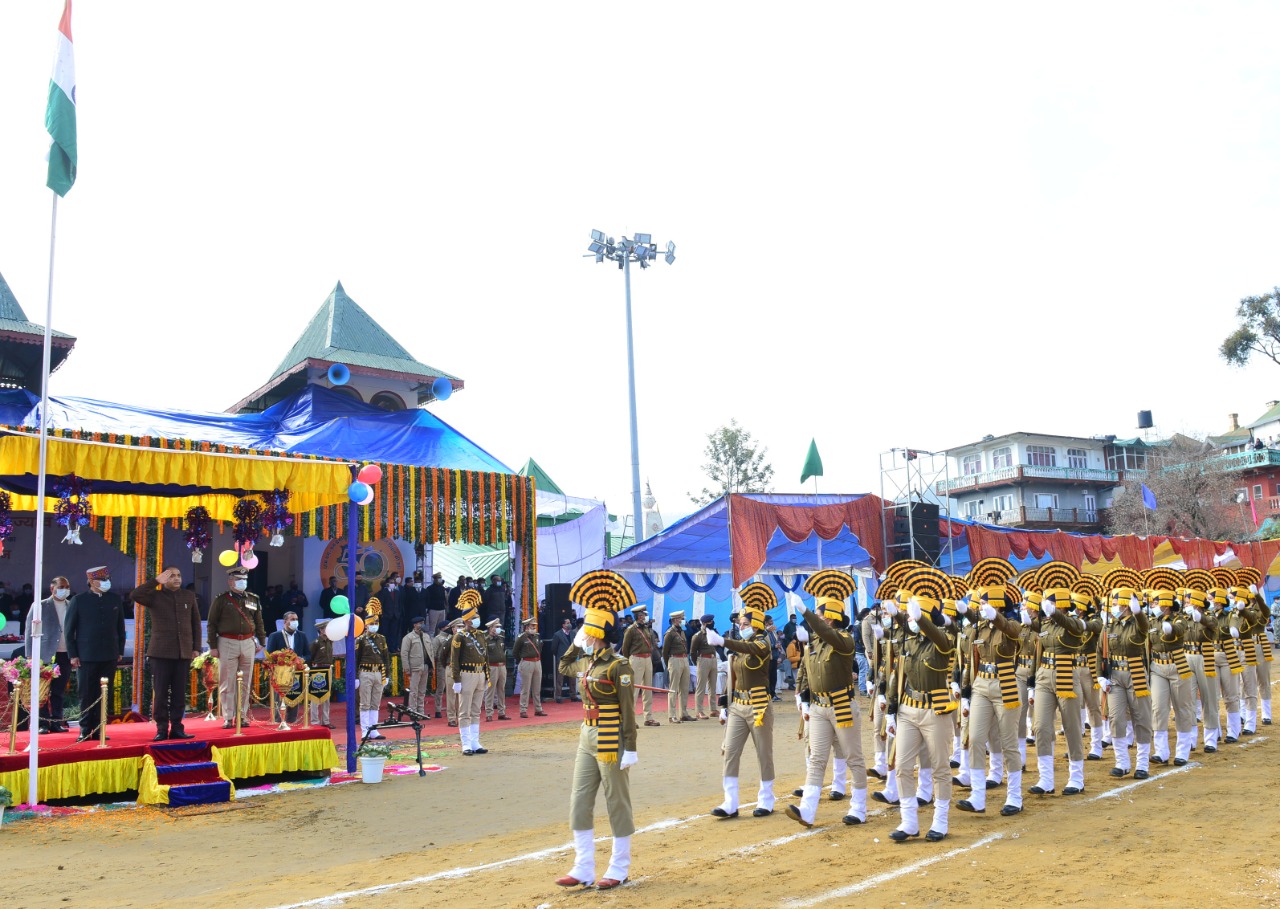 Addressing a large gatherig on the occasion, the Chief Minister said that the State has implemented new pay scales for employees and benefits of about Rs 6000 crore have been extended to about 2.25 lakh employees. He said “it was felt that few disparities existed in the new pay scales of few categories and now the employees would be given third option besides two options already given to them.

He announced increase in annual income for availing the benefits of various welfare schemes and pensions for the weaker sections of the society from existing Rs 35,000 to Rs 50,000. He said that benefits of higher scales would be provided immediately to all those constables who were eligible for higher scales. He announced that all the constables appointed after 2015 would be eligible for higher scale as per other categories of employees 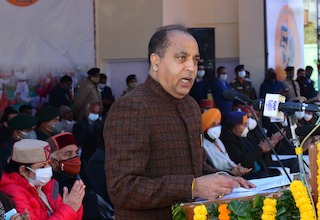 Jai Ram Thakur while congratulating the people of the State on this historic occasion said that today this day was also observed as the closing ceremony of celebrations organised to commemorate the Golden Jubilee year of statehood of Himachal Pradesh. He paid rich tributes to the founder of Himachal Pradesh and first Chief Minister of the State Dr Y.S. Parmar for laying sound foundation for development of the State. He also paid rich tributes to all the freedom fighters and soldiers who laid down their lives for guarding frontiers of the Nation.

While tracing the developmental history of the State, Chief Minister said that the State of Himachal Pradesh has made unparallel development in all spheres. He said that in the year 1971, the per capita income of the state was only Rs 651 which has increased to Rs. 1,83,286, the GDP of the State has gone up from Rs 223 crore in 1971 to Rs 1,56,522 crore. He said that literacy rate of the State has gone up to 82.80 percent which was 23 percent in 1971. The agricultural production in the state has increased from 954 metric tons to 1500 metric tons and food grain production in 1971 was 9.40 lakh MT which has increased to 16.74 lakh MT.

Jai Ram Thakur said that despite the Corona pandemic, the present State Government during last four years has worked with new zeal and innovative thoughts to give new dimension to the development of all parts of the state. The State Government has taken Himachal to new heights of development by imbibing the basic mantra ‘Sabka Saath, Sabka Vikas, Sabka Vishwas, Sabka Prayas’ of Prime Minister Narendra Modi for balanced and holistic development and welfare of all sections of the society. He said that the people of the State were fortunate to have the affection and benevolence of the Prime Minister.

Chief Minister said that State Government during these four years made honest efforts to strengthen the state’s economy, providing social security to the elderly, creating employment and self-employment opportunities for the youth, ensuring women’s security and their socio-economic uplifitment, prosperity of farmers and horticulturists and backward sections of the society. He said that during the last four years 3108 km long roads and 240 bridges were constructed and 321 villages provided road connectivity. Jai Ram Thakur said 10 SDM offices have been opened during the present tenure of the State Government. He said that there were 2062 gram panchayats in 1971 and today there were 3615 panchayats, out of which 412 new panchayats were created by the present government. 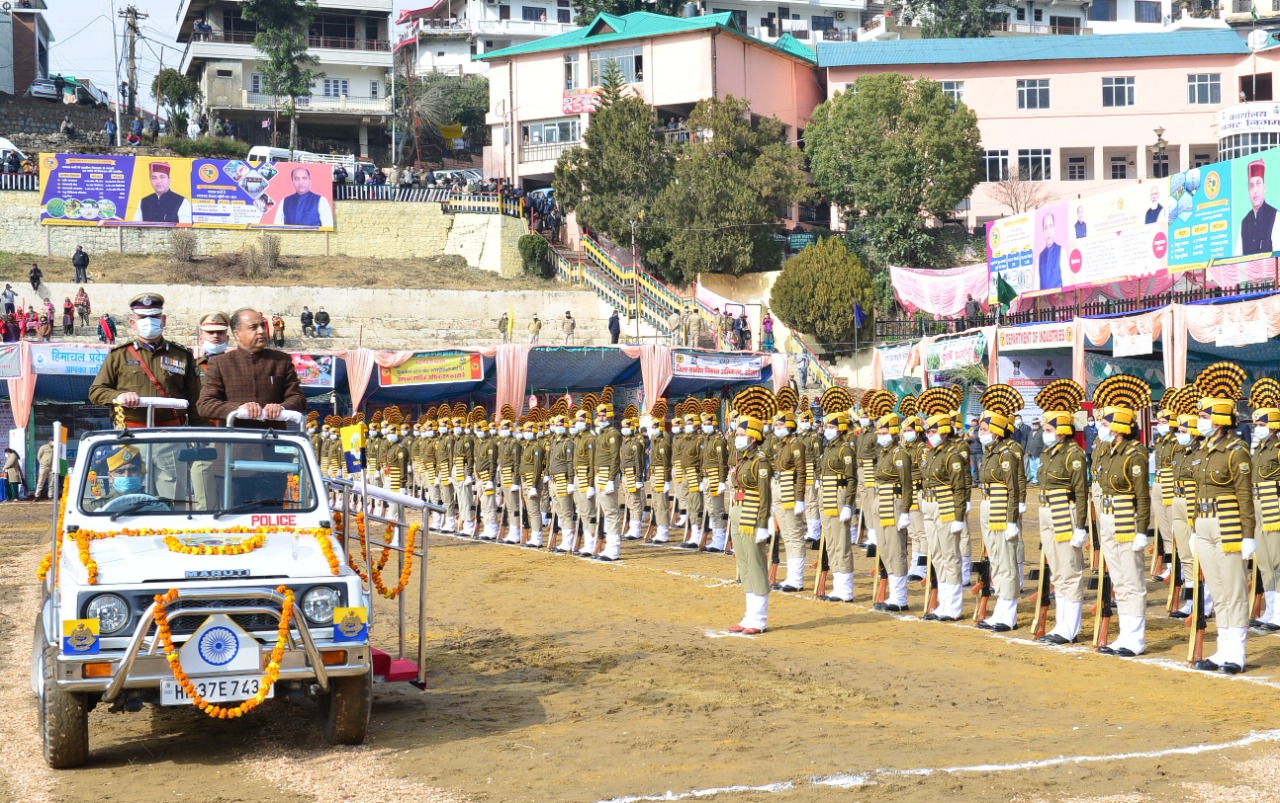 He said that the State Cabinet in its very first meeting decided to lower the age from 80 years to 70 years for providing Social Security Pension without any income limit. He said that over 2 lakh new pension cases have been sanctioned and the different types of Social Security Pensions have been increased during this period. He said that pension of Rs. 1000 per month was being provided to the women of age 65 to 69 years under Swarn Jayanti Nari Sambal Yojana. He said Mukhyamantri Shagun Yojana and Mukhyamantri Kanyadan Yojana have proved very beneficial in providing financial assistance for marriage of girls of BPL families and destitute women and girls respectively.

Jai Ram Thakur said that the State Government has started ‘Nai Rahein, Nai Manzilein’ scheme under which Bir-Billing in Kangra district was being developed as para-gliding, Chanshal valley in Shimla district as skiing, Janjehli in Mandi district as eco-tourism destination. He said that Larji and Tattapani in Mandi district and Pong reservoir of Kangra district were being developed as water sports destinations. He said that efforts were on to construct a greenfield airport at Mandi and for expansion of Shimla and Kangra airports to facilitate the tourists. He said that recently a ropeway from Dharamshala to McLeodganj at a cost of Rs 207 crore has been started. A grand Shiv Dham is being developed at Kangnidhar in Mandi at a cost of Rs 183 crore, which will be a major center of attraction for the people, he added.

The Chief Minister said that the State Government has implemented Mukhyamantri Grihini Suvidha Yojana, under which free gas connections have been provided to 3.23 lakh families, who could not be included in the Pradhan Mantri Ujjwala Yojana. He said that with the successful operation of both these schemes, Himachal has been declared as the country’s first smoke-free of the country due to successful implementation of these schemes.

Jai Ram Thakur said that the State Government started innovative Jan Manch for redressal of the grievances of the people and so far, 232 Jan Manch have been organised in which 52,665 complaints and demands were received and 93 percent have been redressed. He said that Mukhyamantri Seva Sankalap Helpline-1100 has also been started to redressal of the grievances of the people by registering their grievances online from home. More than three lakh complaints have been registered on the helpline, out of which 86 percent have been resolved, he added.

The Chief Minister said that more than five lakh families have been registered under HIMCARE scheme and till now, more than Rs. 200 crore have been spent for the treatment of 2.17 lakh people of the state. He said that financial assistance of Rs. 3000 per month was being provided for continuous care to the economically weak people suffering from serious diseases under Mukhyamantri Sahara Yojana.

Jai Ram Thakur said that the State Government organized first Global Investor’s Meet in Dharamshala in the year 2019 which was graced by Prime Minister Narendra Modi in which 703 MoUs worth Rs. 96,721 crore were signed. He said that the Union Home Minister Amit Shah laid the foundation stone of projects worth Rs.13,656 crore during the first ever ground breaking ceremony organized in Shimla. He said that recently on the occasion of completion of four years tenure of the State Government, Prime Minister laid the foundation stones of 287 investment projects amounting to more than Rs. 28,000 crores during second ground breaking ceremony held at Mandi on 27 December, last year.

He said that Prakritik Kheti-Khushal Kisan Yojana has been started to promote agriculture sector and the State was leading state in the country in adopting natural farming. He said that with the construction of the strategically important Rs 3400 crore Atal Tunnel Rohtang, tourism sector has got a new dimension as with the opening of this tunnel, lakhs of tourists from all over the country and abroad are visiting Lahaul and Pangi valleys.

Jai Ram Thakur said that Government has ensured better health facilities to keep the people of state safe from the corona pandemic. He said that steps were taken to strengthen the health services in the State. He said that there were only two oxygen plants in the state, whereas today there are as many as 48 oxygen plants. Today, the state has the facility of more than one thousand ventilators whereas earlier there were only 50 ventilators, he added.

Chief Minister said that the State Government has taken effective steps to check the spread of this virus. Himachal has become the first state in the country to achieve hundred percent targets of Phase-I and II of vaccination against Covid pandemic. He thanked the Prime Minister for his full cooperation in this challenging time and also expressed his heartfelt gratitude for the tireless efforts of the frontline workers and the cooperation received from the people of the state in the success of this important campaign.

He honoured three war widows of Solan District including Dil Kumari Thapa, Savitri Devi and Nirmala Devi on this occasion. Head constable Sandeep Chandel was also felicitated by the Chief Minister who has been awarded Prime Ministers Police Medal for life saving for the year 2018. Later, the Chief Minister inaugurated an exhibition put up by different departments and evinced keen interest in it.
A colourful cultural programme was also held on the occasion.