If you’re wondering how deep the rot has set into our society, and how autonomous the radicalisation of even the educated sections has become, you have to look no further than the open letter written by 32 assorted retired IFS officers on the 5th of this month in response to an appeal by more than 100 veterans ( including five retired service Chiefs) to the President and Prime Minister. This latter missive was an appeal for action to stop the kind of genocidal speeches made at the Haridwar Dharm Sansad on the 19th of December, 2021. Incidentally, similar appeals have been made by other eminent citizens, including the alumni and students of at least two IITs, a group of Supreme Court lawyers to the Chief Justice, and at least two retired judges of the Supreme Court itself.

Let’s call the former lot of IFS blokes the G-32, since they have made their political affiliations quite clear now and it’s not too difficult to surmise who could have prompted them to take umbrage at this appeal and to perform this most undiplomatic genuflection to the great anarch. What did surprise me, however, is the petty cliches and vitriol in their language, the calumny and contempt, for if there’s one art diplomats are known for it is the turn of phrase, the ability to pick the mot juste. But when veterans and retired chiefs are branded as ” a group of activists” and as ” known leftists with sympathies for Maoists”, and when their action is ascribed to ” frustration at not having…recognition and award after superannuation” and is described as an ” investment in a potential political change at the centre”, you know the IFS has lost its marbles and is in dire need of a serious revamp and what the Chinese would euphemistically term “re-education.” But not this lot, because they already appear to have been re-educated by the BJP’s IT Cell and Arnab Goswami. For it takes an extraordinary degree of cognitive dissonance to accuse people of the caliber of Lt. Gen. Vijay Oberoi, Admiral Vishnu Bhagwat, Admiral Arun Prakash and Major General S.G.Vombatkere of lack of morality and dubious motives. 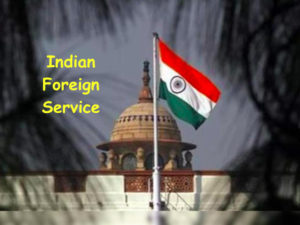 I am at a total loss to comprehend what part of the veterans’ letter could have offended the G-32 to make them discard their gin and tonic and canasta and take up cudgels against reason and sanity. For this letter nowhere blames the govt. for the Haridwar incitements, it instead expresses dismay at the govt’s inaction and ” urges leaders of ALL ( emphasis mine) political parties to condemn these calls for what is tantamount to genocide of Muslims.” Something, by the way, which even the Supreme Court appears to have agreed with because it has taken notice of a petition by Anjana Prakash, Senior Advocate and retired judge of the Patna High Court, and issued notice to the Center and the Uttarakhand govt. The G-32 also appears to have ignored the fact that the veterans have addressed their letter to not only the govt. but also to the CJI, the service chiefs and leaders of all major political parties. It is not intended ” to bring odium to the Modi govt.” as our former Ambassadors seem to presume but is a call for it ( and all other stakeholders of our democracy ) to act before it is too late.

Even allowing for the fact that, having spent most of their active lives abroad in the insular comfort of their embassies, most IFS officers become disconnected with ground realities here, it still amazes me that they are oblivious of the groundswell of hatred, intolerance and majoritarian violence that is being assiduously created here since 2014. How can they think that Haridwar was just ” a ranting by fringe elements” when exactly the same abuse and threats have been publicly stated by the BJP’s leaders, Chief Ministers. Union Ministers, and MPs of the Tejashwi Surya variety? Given the positions they have occupied in the foreign service, surely they are aware that a call for killing of members of a particular faith amounts to genocide under international law? That Haridwar was not an isolated incident but part of a pattern, preceded by Muzzafarnagar, NE Delhi riots, lynchings, violence on anti-CAA protestors, beating up of students in JNU, Jamia and Aligarh Muslim University, vandalisation of mosques and churches in Karnataka, MP, Assam and UP, vigilante obstruction of Namaz even at approved spaces in Gurgaon; it is an endless list of hate gone autonomous. And in none of them has the govt. taken any serious action to prosecute the bigots, unless nudged by the courts. But I’m being too generous, perhaps, to these saffronised diplomats, for they give the game away when they say that all that the so-called sants were doing at Haridwar was ” asserting their Hindu identity. “Which is an apt description of Nazism, in case this minor similarity has escaped their rarefied attention.

In their haste to be noticed by the Supreme Leader, the G-32 completely misses the main thrust of the veterans’ communication- not the hate speeches themselves but the govt’s studied indifference to it and its refusal to take action against these bloodthirsty sants. ( Some arrests have been made but only after public and international outrage and after the matter was brought to the Supreme Court’s notice; this does no credit to the govt.) It is this implicit endorsement and encouragement of such xenophobia which has alarmed all true Indians, because it is part of a continuing pattern, a dog whistle for the establishment of a Hindu Rashtra. Surely the G-32, with their high UPSC rankings, could not have missed this pattern? Or India’s continuous decline in the global rankings for human rights, press freedom, religious freedom? They are, after all, trained to feel the pulse of international public opinion and perception, unless they have ossified much more rapidly than is usual for retired civil servants!

They could not be unaware of similar concern expressed by the UN Rapporteur for Minority Rights, or the warning by Gregory Stanton, President of Genocide Watch, which works closely with the UN. Stanton, in a hearing at the US Congress, has warned that India may be on the brink of a genocide. This has been endorsed by the organisation Justice for All. The U.S. Commission on International Religious Freedom has also stated that India under Mr. Modi is ” aggressively advocating for a purely Hindu state,” and has, for the second year in a row, recommended to President Biden that India should be put on the list of CPCs ( Countries Of Particular Concern ), just above the Special Watch list. I do not agree that we have reached the genocidal stage, but it is a fact that an ecology of hate is being created in a planned manner and it is past the time when the govt. should be taking stringent action against these purveyors of bigotry and religious fanaticism.

The alarm and concerns expressed by the veterans, the Constitutional Conduct Group, Supreme Court lawyers, IIT staff and students, and what remains of a free press, are valid. Nor are they “selective” as these misled diplomats seem to think: one cannot draw a balance between right and wrong, or between good and evil. The wrong and the evil have to be called out in no uncertain terms. Retired civil servants are free to take sides, but they should be careful to be on the side of history. Unfortunately, these 32 diplomats have allowed their political bias to overcome their sense of reason. Their letter, conceived in asininity, motivated by servility and penned in unholy haste, should never have been written. It does great dis-service to a fine institution like the IFS,