The seat, which is a prestigious contest for chief minister Jai Ram Thakur, fell vacant after the death of two-time BJP MP Ram Swaroop Sharma on March 17. 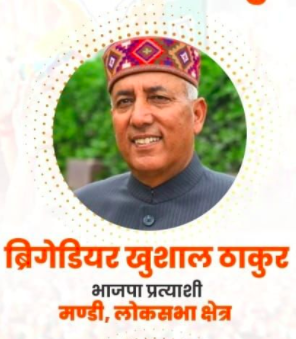 Both Brigadier Thakur and Pratibha Singh are 65 years old. They will be filing their nominations on October 8, the last day of filing the nomination papers.

Brigadier Thakur, a former commanding officer of 18 Grenadiers in the Indian Army, played a key role in the retaliatory strikes on Tololing and Tiger Hills in the Kargil War, two decades ago.

Pratibha Singh, who has represented the Mandi parliamentary seat twice, has been fielded by Congress.

Brigadier Thakur hails from Nagwain in Mandi district and retired in 2010. After retiring, he formed a four-lane Sangharsh Samiti six years ago and is fighting for the affected families. They have even lost their ancestral land to highway construction.

Pratibha Singh is relying on the sympathy wave in her husband’s favor to win the Lok Sabha seat, which goes to the polls on October 30. Her husband Virbhadra Singh, who at the age of 87 died on 8th July 2021, in a political career spanning 50 years was elected chief minister for 6 terms. Pratibha Singh had lost the Mandi seat to BJP’s Ram Swaroop Singh in 2014. At the time of his death, he was representing the Arki assembly seat going for by-elections along with two other assembly seats, Fatehpur (in Kangra district) and Jubbal-Kotkhai (in Shimla district) for which polling is to be held on October 30.

The Mandi parliamentary constituency geographically is one of the largest ones in the country as it also includes the thinly populated tribal-assembly constituencies of Kinnaur, Lahaul-Spiti and Bharmour that are spread across vast tracts of difficult Himalayan lands.