Dharamshala: Native snow trout (Schizothorax richardsonii), an iconic species of high-altitude Himalayan Rivers, is threatened by exotic brown trout (Salmo trutta) invasions and by damming of headwaters as it reduces opportunities for it to seek refuge in higher waters, a study has revealed.

The research study – Dendritic prioritization through spatial stream network modeling informs targeted management of Himalayan rivers capes under brown trout invasion – has been published in the Journal of Applied Ecology, a publication of the London-based British Ecological Society.

Authors of the study Ms Aashna Sharma, Dr. Vineet K. Dubey, Dr. J.A. Johnson, Dr. Y.K. Rawal and Dr. K Sivakumar have pointed out a necessitated prioritization of selected segments of high-altitude river basins to avoid this threat (which they term as ‘Dendritic prioritisation’, owing to the branched structure of high-altitude rivers) if river invasions across Himalayan watersheds are to be stringently managed.

The sampling for the study was done between 2016 and 2019 at 25 points on River Asiganga watershed in Uttarakhand and 108 points River Tirthan watershed in Kullu valley of Himachal Prades after undertaking long treks from river mouth to its origin in difficult Himalayan terrain.
The study carried out over 218.7 km of river stretch in the two rivers have demonstrated that brown trout invasion is forcing native snow trout to move upstream towards headwaters of the river even though they prefer the river mainstreams for their survival.

“This is concerning as the headwaters can at best only provide sub-optimal habitats, not sufficient to is majorly a disastrous outcome of our preferences for the invasive-alien- the brown trout for sport leisure and delicacy choices we have,” adds Ms Sharma, a resident of Dharamshala. 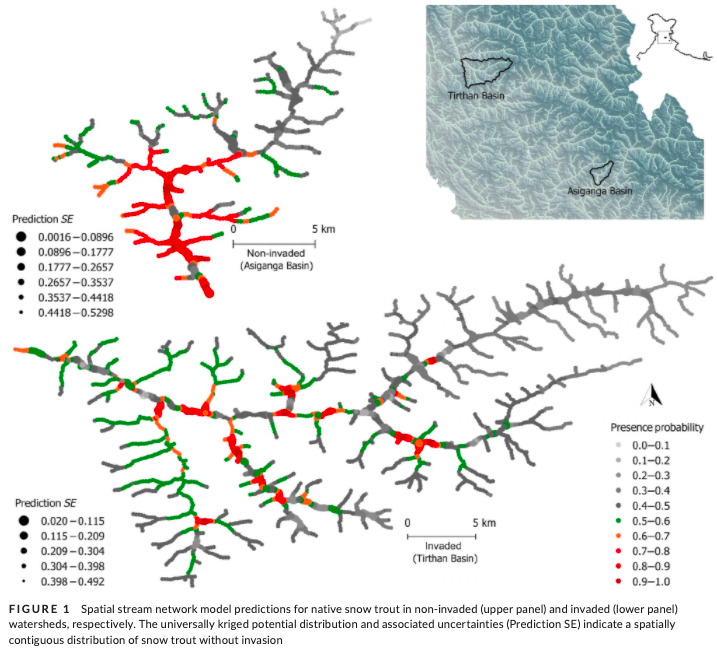 This research brings out to two major findings, says Dr. Vineet K. Dubey. “Firstly, the native species (Snow Trout) are evidently pushed from the main channel into the headwaters by the invasive species (Brown trout). Secondly, our models predict a disastrous situation where the natives have to compete for space with highly aggressive brown trout in whatsoever habitat is left for the natives to occupy,” says Dr Dubey. “This has made the distribution of native snow trout highly patchy and fragmented which can also be leading to potential local extinction in near future,” he warns. 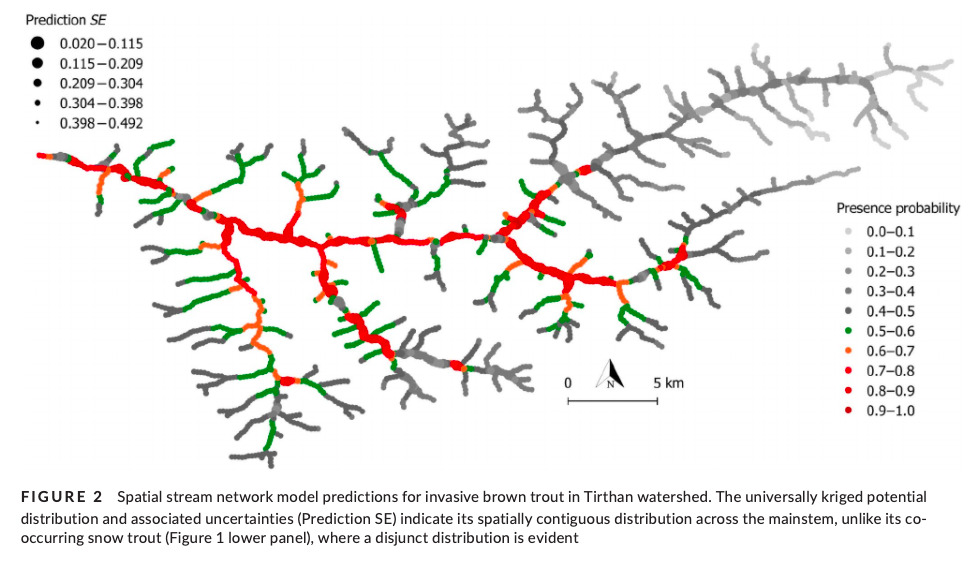 The researchers even suggest of the need for having no dams at the headwaters. Dr. K. Sivakumar stressed, “We have already tapped most of the hydropower from these fragile ecosystems. Damming the headwaters will dilute the opportunities of the natives to seek invasion refugia, as native species like the snow trout move towards headwaters under invasion as these stream segments provide conditions not so favourable for the invasives.”

Dr J. A. Johnson said, “The snow trout is an iconic species of high-altitude Himalayan Rivers distributed all along the Himalaya from Jammu &amp; Kashmir to Arunachal Pradesh. Owing to the dearth of information on other high-altitude natives, the snow trout is a potential keystone species for this study to facilitate the conservation of all other threatened riverine taxa in the Himalayan rivers. The brown trout on the other hand is an exotic species, which is highly promoted due to its popularity for recreational angling and food delicacy. The fish was introduced under the British reign mostly for sports purposes.”

Snow Trout (Schizothorax richardsonii) is one of the most primitive natives that co-evolved with Himalayan orogeny, a fish species representative of high altitude stream naturals. Snow trout is categorized as Vulnerable on the IUCN Red List as it faces serious threats owning to hydropower development flow alterations and recent evidence has shown that the species is also threatened due to competitive interactions with the invasive brown trout.