As the pandemic and torrential rains have confined us indoors, the grey melancholy of monsoon rains and drenched surroundings makes us crave for that steaming cups of masala-infused chai and effortless piping hot potato and onion pakora’s.

This may be a delightful ritual and custom in most of households on a rainy day.

But here in the hills, when as I child I visited my grandparent’s house, the magic of monsoons was slightly different from the same old routine.

The memory of salty and tangy swirly leaf rolls is still so fresh to my tastebuds.

Fortunate to have grown in the time and age when the local cuisine and regional delicacies were still prevalent in most of the households before the fast-food culture and the rushed up two-minute cooking took over, which only meant to cook in a jiffy forgetting the main ingredients of a dish.

Many moons back, monsoons meant – a weekly pilgrimage to our grandparent’s kitchen garden. No matter how much it poured cats and dogs but once a week this event definitely took place. 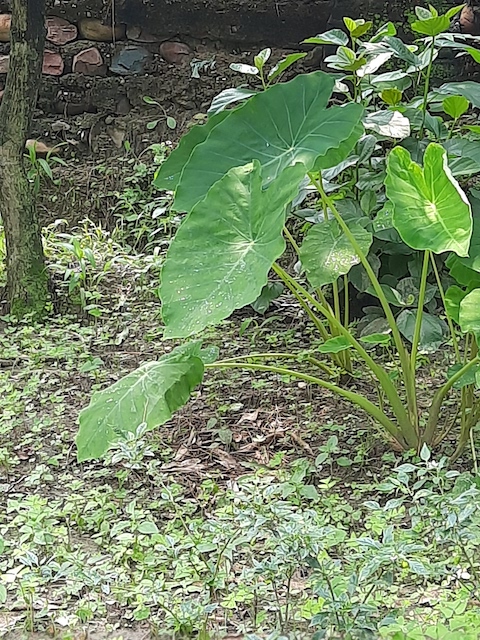 Despite the fact that the backyard did not offer much during the rainy season but still the heart-diamond-shaped green Colocasia (Arbi) leaves were found in abundance.

This seasonal produce has given Himachal its regional specialty called “Patrode “. The leaves big and small after plucking and washing were layered with the spiced chickpeas and then their leaf rolls were made.

But all this was no ordinary procedure then, it was more of a family affair.

The chickpeas batter was symbolic of the bonding and binding of a family coming together. Where all the members of the family contributed equally from plucking of colocasia leaves to preparation of mixture and applying it with their hands on the leaves.

Once the leaves were folded after application of the batter, they were steamed and could be directly consumed after steaming if one wanted the taste to be raw and bland but for someone like me it was all about tampering (tadka) with cumin, mustard, fenugreek, asafoetida and dried red chilies in mustard oil. 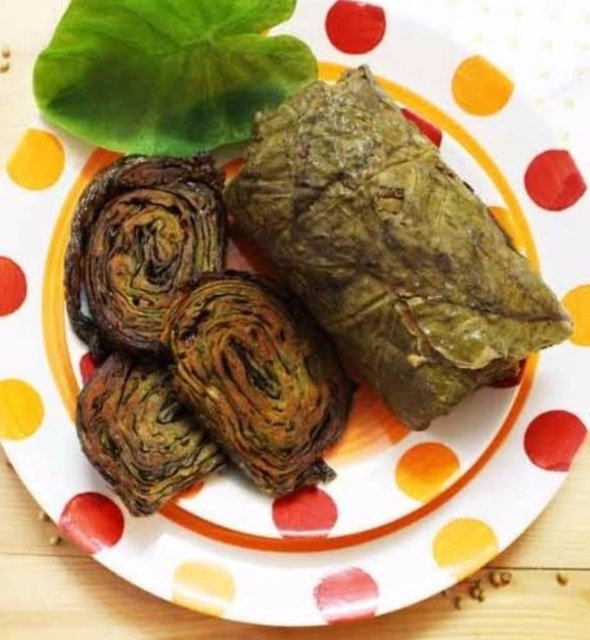 .
This steamed dumpling in a leaf called “Patrode ” in Pahari became a source of immense joy and fervor for us as children. As we relished every moment from its preparation, to every bite of its consumption.

The mention of word ‘patrode’ still makes me nostalgic. A homemade snack, which could be consumed any time of the day with any meal of the day accompanied with a glass of buttermilk or a bowl of curd due to the fiery, spicy and hot temperament of the leaves.

It is said, that the word ‘patrode’ is derived from two words – ‘patra’ and ‘vade’ where patra means leaf and vade means dumpling.

Colocasia dumplings were all about childhood well spent and well-fed. This multipurpose plant not only offered its leaves but its stem was a delicious source of cooked vegetable (bhujju) and roots (arbi) were not only used for vegetables or stuffed paranthas but was also used in making of pickles.

The paste used for patrode may vary now, and it does not taste the same anymore though now it is rarely made in my hometown, if made the secret ingredient is missing as it tastes so drastically different.

Earlier the mere process of applying the paste on the backside of the leaves was like a work of art, a therapy, and a meditation for the kids and the grownups.

Without any measuring spoons the final product was flawless and a magical confluence of smell, color, texture, and taste.

Recently tasting this traditional Indian hill delicacy sent by a close relative was a gastronomical experience of its kind as I was transported down memory lane.

Though this rustic dish is a treat to the tastebuds and has the potential to surprise us this traditional leafy delicacy is becoming more of a rarity nowadays.

Also because of the reason that it is only available in a particular season, apart from this nowadays one only gets to gorge on exotic dishes and no local ones.

The ethnic traditions involved while preparing it are also lacking somewhere.

Many versions in the name of up-gradation and innovation have produced its many variants and versions.

Well at times it is important to document our traditional family recipes over the years as they are an important part of our heritage, culture and legacy and are the connecting link to the secret ingredients which are unfortunately lost somewhere in imitations and in the search of new appetizers.