Hemis-Shukpachan, located around 80 km far from the Leh city, is a village of Leh district of Ladakh, Union Territory of India. Alternative transliterations of the village’s name include Hemishok Pachan, Hemmis Shyk Pachan and Hemis Shukpachan. In short Hemis-Shukpachan is also known as Heshuk and is regarded as a holy place due to the presence of the Juniper (shukpa). Hemis Shukpachan is a big, but scattered village complex of four hamlets, with around 150 households, a large number among them functioning as homestays or guest houses. The village is located in Likir tehsil District Leh and forms part of the enchanting Sham Valley of Ladakh. It has a unique serenity about its location, being surrounded by mountains of reddish hue on all sides. The main source of water here is a spring, which flows throughout the year; therefore the people of Hemis-Shukpachan never face any kind of water shortage. The juniper trees stand tall in the grassland propped up by this spring water, while shrubs and thorny bushes like Rosa webbiana, Hippophae rhamnoides ssp. turkestanica and Lonicera spinosa play supporting roles. 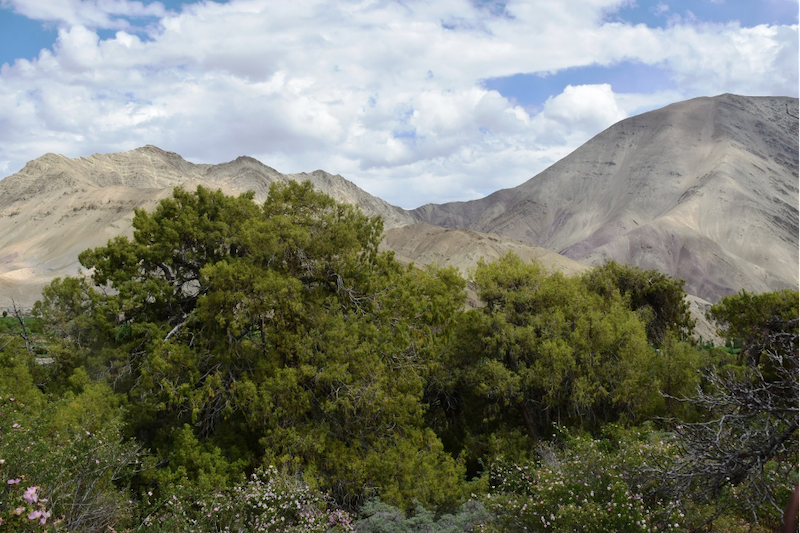 Apricots grow here in plenty and now apples too have been planted by some. Every village have some special sites or places which makes a difference from others. Likewise, even Hemis Shukpachan has some uniqueness besides its shukpa.  Above the village is the Dakmar Hill (meaning ‘red rocks’) that has a hermit’s abode. The Rinpoche and monks from the Ri-dzong monastery are known to retreat here for meditation. Lamas used to meditate here for years in isolation. Today it has become a very famous place to visit especially for the Gelugpa or Yellow Hat Buddhist sect. The hills to the southeast and southwest are also good habitat for the elusive and rare Ladakh Urial, locally called shapo.

Hemis Shukpachen is also famous for its stonba (the statue of Buddha), which was built by one villager (Skarma Tsering) and all the other villagers later made contribution towards its completion. Once complete, it was inaugurated by Gladen Thisur Rinpochey from the Ridzong monastery.

Hemis-Shukpachan is known all over Ladakh as the village blessed with the sacred Juniper trees, which are locally known as shukpa in Ladakhi – hence the village name. Shukpa leaves have been used widely as incense in monasteries and homes across the region, but unfortunately the number of junipers in Ladakh declined over the years. Now, besides the nearby Aryan valley, the Juniper has just vanished from the Ladakh region. Only a lone tree may be encountered near a monastery or the village, sporadically across the region. 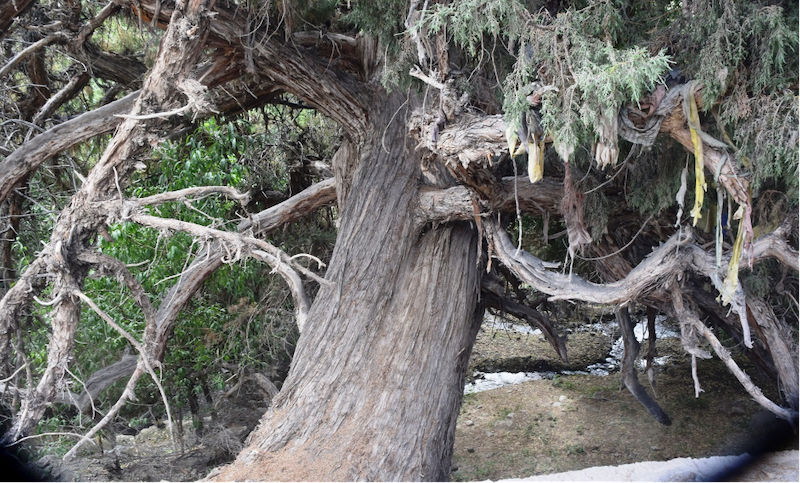 The village community has made a detailed plan to protect the last standing junipers around the village. With the help of the LAHDC, they have barricaded this last remaining small population of Junipers, numbering around 30-35. The Leh Forest Department has put up a sign board for the information of the visitors. The shukpa are all in a small congregation towards the western part of the village. There are a few exceptions of sporadic individuals scattered elsewhere in the village. 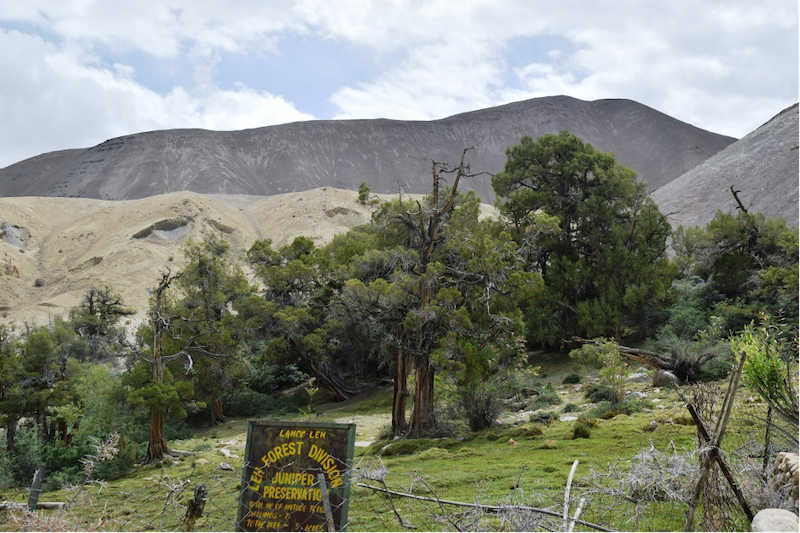 The LAHDC has provided protection to the Shukpa and is maintaining it as a Juniper Preservation Plot.

The trees in this Juniper grove seem to have been here for many hundreds of years – no one in the village could tell us the exact age. The crowns of the trees have become mottled and balded with age, but their majestic touch and appearance is still there to feel. Some of them have prayer flags tied as offerings, fluttering in the fast breeze, adding more religious sentiment to the trees.

As a botanist I wanted to ascertain the species, but after a lot of discussions with my senior guides and friends, I was not confident to pin point the species. Ralph Randles Stewart (1916-17) reported it as Juniperus macropoda however the Kew website (www.plantsoftheworldonline) put J. macropoda as a synonym of Juniperus seravschanica; Klimes & Dickoré (2005) reported this as Juniperus semiglobosa. I will leave the complex subject of taxonomy aside for the moment, with more discussions and literature surveys to be undertaken to finally come up with its true botanical identification.

The local people believe that the shukpa grove is surrounded and inhabited by supernatural forces known as lha and lu. Besides, the northern most juniper tree, is referred to as the ama-shukpamo, and is supposedly the presiding deity of the grove, and the protector of the village. 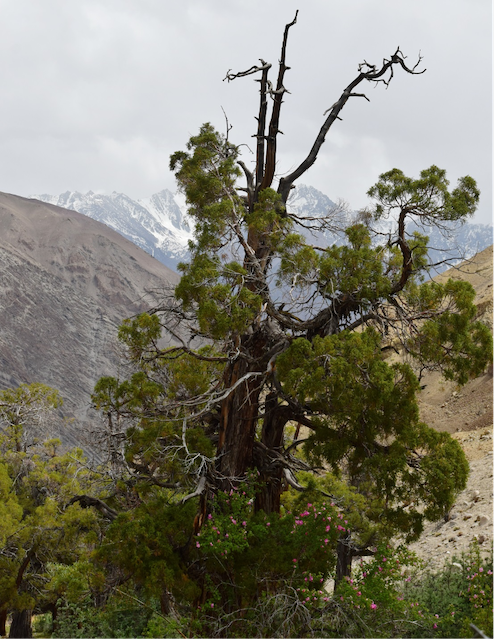 These very old but magical trees, with knobbly, rough, and twisted from age, provide a powerful mystical feeling, standing in splendid isolation above the village, as if guarding the inhabitants from any ill-will and danger.