Dharamshala: Prof H.K.Chaudhary, Vice-Chancellor, CSK Himachal Pradesh Agriculture University has stated that the University was planning to extend mobile advisory services to the Gaddis community (Himachal’s sheep rearing tribe) during their migration period. He was interacting with Shepards on Friday after distributing 19 superior Gaddi breeding bucks.

Professor Chaudhary said, “these breeding bucks are being provided to the farmers with the objectives to bring about overall breed improvement of the existing Gaddi goats under a migratory production system. scientists of the Department of Animal Genetics and Breeding, Dr.G C Negi College of Veterinary and Animal Sciences (COVAS) have raised these bucks after two stages of selection and scientific management. These bucks are free from any disease which can be transmitted to progeny through the bucks, which otherwise cause heavy economic losses to the farmers.” 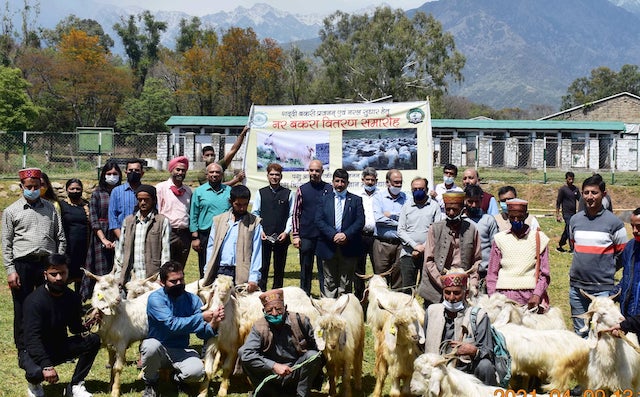 He advised them to fully utilize the potential of these breeding bucks because these superior bucks will pass on desired production traits in the progeny and ultimately will improve the income of farmers.

The Vice-Chancellor said that Gaddi goat meat was of high quality as the goats feed on wild vegetation in high altitude areas free from any chemical use in such grazing lands. He asked the scientists to help the Gaddi nomads in marketing quality meat.

The Vice-Chancellor added that the ongoing All India Coordinated Research Project on Goat Improvement is being implemented under the umbrella of the Central Institute for Research on Goats at Makhdoom, Mathura UP.

To date, more than 250 superior breeding bucks have been provided to the farmers. He told that more than 1600 pure Gaddi goats were being monitored under the project. The project was being implemented under the migratory field conditions by providing strategic breeding, feeding and health control inputs.