Manali: Rescuers fighting cold weather managed to pull out about 100 people who were stranded at Baralacha Pass after the higher reaches of Lahaul-Spiti experienced a fresh round of snow.

Around 20 of them, mostly labourers, were stuck between Keling Serai and Baralacha Pass. District magistrate of Lahaul and Spiti, Pankaj Rai said that some trucks, a pick-up van and cars having mostly labourers were stuck as two vehicles broke down blocking the road from both sides.

He said that more than hundred persons were rescued and brought back to Darcha, while around 20 persons were still stuck in two Tempo Travellers and four small vehicles in the middle of the snow.

Rai said that police tried to stop them as well but they were adamant not to return back and tried to cross the Pass and got stuck. Rescue teams were sent from Keling Serai and Zingzingbar but the teams could not reach the stranded vehicles due to tough conditions and poor visibility because of blizzards.

After the relentless efforts of the BRO and police, about 100 trucks carrying goods and vegetables and other vehicles ferrying mostly labourers, which were stuck at Darcha since April 4 due to snowfall, were sent from Darcha to Sarchu by crossing the Baralacha Pass (16,043 feet) on the Manali-Leh highway . However some vehicles were stuck as snowfall started in the evening.

Col Uma Shaker, commander, 38,BTRF while speaking to Hill Post said that the rescue operations for the same were commenced by BRO on 20 Apr itself where 17 people were rescued from the top. The further attempt got delayed due to poor visibility owing to the heavy snowfall coupled with snow blizzards. 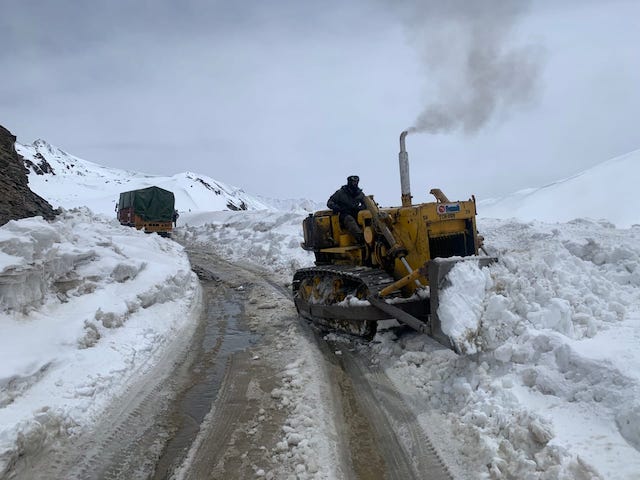 He added after two failed attempts, the rescue party could finally make a breakthrough at 1600 hrs on 21 Apr. The rescue operation continued throughout the night and the 87 people were finally rescued at 0500 hrs on 22 April.

The operation has lasted for more than 30 hrs amid one of the heaviest snowfall spells of the season. He said two parties had marched for the rescue from Sarchu and Zing Zing Bar det. The rescue teams had to walk down to Baralacha La pass in HAA terrain in sub zero temperature and were successful in reaching the Baralachala top in mid night hrs of 21 April amid the triggering of avalanches.

He disclosed that a total of 87 people to include two women and four small children have been safely rescued to the Zing Zing Bar Dett of BRO and have been provided shelter and food. Two persons have suffered chill blains and are being administered with necessary treatment. 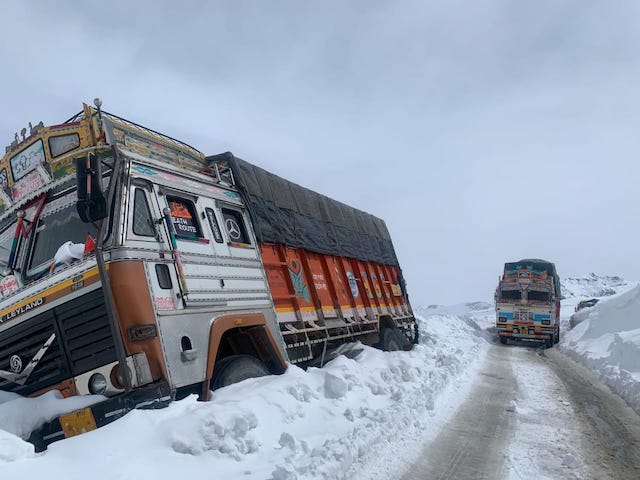 Although the BRO had restored the Baralacha Pass on April 16 and the smaller vehicles had crossed through but the trucks and some other vehicles could not cross due to poor road conditions. They could not proceed beyond Darcha due to heavy snowfall again on April 17.

The BRO had restored the 425-km Manali-Leh highway for vehicular traffic in a record time on March 28 this year but it was risky to commute, especially in view of the adverse weather conditions.

Meanwhile, mercury in the entire region dipped as the higher reaches of Lahaul and Kullu received snowfall and lower reaches were being lashed by rains since yesterday evening.