Dharmashala: Senior BJP leader Shanta Kumar has held political leaders and the government responsible for the worsening of COVID-19 pandemic in the country as health professionals battle the fresh coronavirus surge. 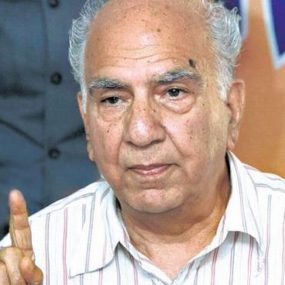 “The most unfortunate thing is that this time the government and leaders have the maximum responsibility for this situation. The negligence of the public is also there but up to a limit. In the past 15 days, the patients in the ongoing pandemic have risen by 5 fold in West Bengal and a similar alarming situation is also there in other states which are undergoing elections,” said Shanta Kumar.

Kumar, a former minister in the federal government and a former chief minister of Himachal in a communique here stated, “it is written in our scriptures, ‘AAPAT KALE MARYAADA NASTI’, means that when life itself is at stake, all rules can be broken.

In today’s situation, there was absolutely no need to perform Kumbh Mela, where thousands of people are taking baths. Crowds are gathering in temples too, the disease increases in such conditions. God is everywhere; it is also in our houses, where we could perform our ‘POOJAS’. If all kinds of religious and political programs would have stopped, many could have been saved of this deadly disease,” says Shanta Kumar

Shanta Kumar, who lost his wife to COVID has requested Jairam Thakur, the chief minister that tours of all leaders in the state be stopped.

“Ministers and leaders could probably do more work, sitting in the office. Virtual programs can also be conducted when needed. This disease is not going to stop; the government should start to use all steps to get the rules to be followed by the public. The fine amount for rule violators could be increased, he said adding, ” when life itself is at stake, every necessary step must be taken by the governments.”