Question: What is contempt of court?

That’s literally true in the India of today: three jokes on the Supreme Court, posted on Twitter by stand up comedian Kunal Kamra, are likely to attract contempt of court proceedings against him (and, technically, against the 20000 people who retweeted the jokes and the lakhs who liked it !). That in fact is the learned advice of the Attorney General who, just a couple of days earlier, had opined that accusing a sitting SC judge of favouritism and of trying to topple a state government did not amount to contempt! ( It should surprise no one, of course, that in this case the worthy concerned was a Chief Minister allied to the BJP ). The elasticity of justice in this country is indeed astounding, and on the same footing as the economic principle of elasticity of demand. The latter states that the higher the price of a commodity the lower its demand; the former provides that the more influential a person is the more benevolent the law and its gatekeepers. 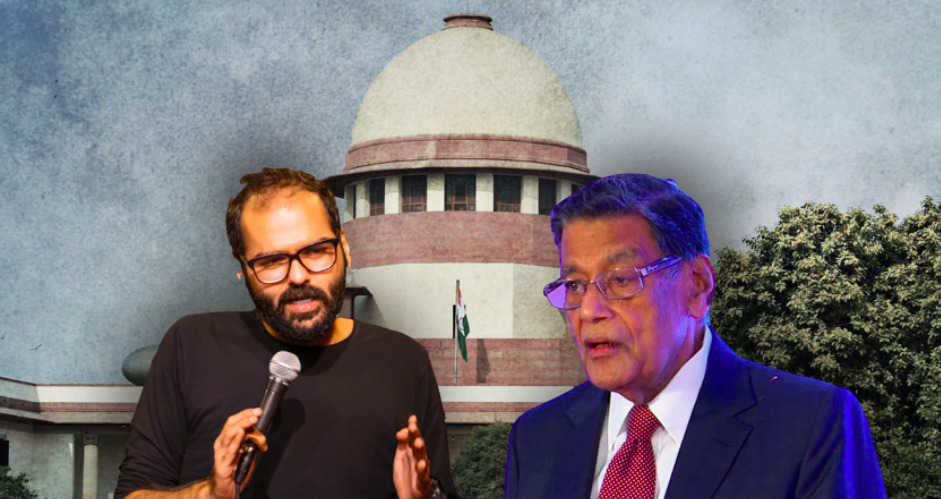 Kunal Kamra is a comedian, for God’s sake ( and a damn good one too !), it is his job to crack jokes and pull people down a peg or two. It is his constitutional right to practice this profession, and he does a better job of it than most judges do of theirs. In fact, one writer has described him as the Laughing Gandhi, for his courage to hold a mirror to the powerful, albeit with a dash of caustic humour. Why should their lordships get so infuriated by a couple of sallies targeting them- he spares no one, not even the Prime Minister or his pit bull anchor. Kamra belongs to a hoary tradition of court jesters- recollect Akbar and Birbal, Patch Sexton in the court of Henry VIII (who inspired Shakespeare’s fool in King Lear) – whose job was not only to amuse the King but also to remind him of a few home truths. Comedians are important sounding boards for all rulers, and our legal Czars would do well to revisit history if not the Constitution. Calling the Supreme Court a joke is just a joke, your honour, unless you feel in your heart of hearts that it is more than that, that it could be a terrible truth. In which case it is not the court’s honour which is at work here but a guilty conscience.

And, by the way, this is the Supreme Court we are talking of here, not King Arthur’s court or Kublai Khan’s court. This is a court of a democratic country, created by a Constitution framed by we the people, paid for by the same citizenry who have no access to it. Criticism of this court, if there is no malice or ulterior intention behind it, cannot be a ground for the Attorney General or judges to term the critic a contemnor. Pomposity and pride do not go well with the honest and equal dispensation of justice. Humility might be a better substitute.

I am reminded here of another humorous incident. A senior Justice of the US Supreme Court had gone to his old Law University as chief guest for a function. Meeting the Dean, he remarked in a lighter vein: ” Dean, do you still teach your students about the pomposity and bluster of judges ?” The Dean smiled and replied: ” No, your Honour, we let them find that out for themselves.”

Are we now finding out for ourselves, with so much time and energy spent by the court in pandering to its aggrieved pride by hauling up alleged contemnors? Should this time ( paid for by the taxpayers ) not be better spent in some introspection by our judges, to try to find out why exactly is the ordinary citizen so incensed by the manner of the court’s functioning of late, to honestly consider why social media is full of derision against them? To ruminate on whether praise from the likes of Arnab Goswami and hosannas from BJP spokespersons are really the certificates of good conduct they prefer over the appreciation of millions of ordinary, law-abiding, unconnected citizens?

It appears to be reigning contempt these days, which of course is another joke, considering that important matters which have a bearing on our federalism, electoral funding, liberty of citizens, access to the internet, and freedom of speech never find mention in the cause list. But if contempt is the flavour of the day then one wonders: why is the court not initiating contempt against the Chief Secretary and DGP of Jammu and Kashmir, whose administration had sworn on oath that Ex-MP Saifuddin Soz was not under detention, whereas the very next day the police were caught on video forcibly preventing him from leaving his house or talking to reporters? Does Kamra’s tweet constitute a greater danger to the republic than the open defiance and illegal actions of the J+K government?

As a common citizen owing no allegiance to any political party I have much to be disturbed about our legal system, which appears to be getting more opaque, unaccountable, and biased every passing day. One which has abdicated its primary function- to act as a check on a powerful and majoritarian executive. The rule of law is getting replaced by the jurisprudence of the sealed cover, the fait accompli, and the adjournment. It’s not just about Arnab Goswami and his over the counter bail when hundreds similarly placed, their bail petitions being repeatedly rejected or hearings postponed, have been behind bars for months. It’s not just about a judgment that denies public places to citizens protesting against a government. It’s not even about an order that does not allow an Opposition Chief Minister to take action against defectors from his party who are hell-bent on toppling his government. These are symptoms of a creeping infection against which we, and not just Kamra, must speak out before it consumes the entire judicial framework. Before we descend into what Pratap Bhanu Mehta in an article in the Indian Express of 18th November describes as ” democratic and judicial barbarism.”

Notwithstanding the honorifics attached to their names, our justices must realize that they are not celestial beings, the Constitution does not give them their extraordinary privileges and protection because they embody some kind of divinity. It does so because they are expected to perform a difficult job- confront the government and hold it accountable whenever it crosses a constitutional red line. That is no longer happening since the last three CJIs at least, as Mr. Prashant Bhushan had pointed out in his now-famous tweet. In a democracy, there is no judicial teflon, and there is no “lese-majesty” when there is no majesty left in an institution. Sriram Panchu, a senior advocate in the Madras High Court puts it devastatingly in a brilliant article in the Hindu ( 16th November ): ” Power ( of the Supreme Court) comes not from Articles 32 or 226 but from the public esteem and regard in which you are held, and that proceeds from the extent you act as our constitutional protector. In direct proportion. Sans that, there are only trappings. ” Cases which may embarrass the govt. are not being heard for years, without any explanation. The Collegium appears to have completely surrendered to the govt. in matters of appointment and transfer of judges ( how can we forget the midnight transfer of Justice Muralidharan of Delhi High Court when his questioning of the Delhi police in the riots case threatened to expose their mischief ? ) Application of the law has become so arbitrary, and capricious, that at times one wonders whether one is in a court or a casino. Goswami gets bail in one hearing, others are asked to approach High Courts or trial courts. An 83-year-old priest who suffers from Parkinsons disease and cannot hold a glass applies for a sipper or straw: he is given a date three weeks later for hearing the case! An eminent academic and poet, who should never have been in jail in the first place, suffers from Covid, dementia, incontinence, and severe UTI; his bail applications are repeatedly rejected and he is shuttled from one hospital to another. Our courts are losing not only the sense of justice but also that of simple humanitarianism. The law is supposed to be strict, not cruel, and barbaric- how does one explain it to our judges?

Far from reigning in the govt’s excesses ( which is what its constitutional duty is), the higher judiciary appears to be encouraging it by its silence, selective orders, and even acceptance of post-retirement sinecures and appointments. Many years ago a Chief Justice, when told by the then Prime Minister that he looked forward to a ” cordial” relationship with the Supreme Court, had the integrity to retort that the relationship between the executive and the judiciary should be ” correct ” and not cordial. It is impossible to even conceive of this kind of rectitude today. Such an amalgam of courage and principles, unfortunately, is to be found in the pages of history only, and that too only till the time the Education Minister revises the syllabus!

In the hands of the present government at the center and in some of the states, the law is running amok and the SC appears to be reluctant to stop this arbitrariness. The application of laws is no longer based on accepted general principles ( as it should be ) but is subject to individual interpretations. Even repeated rulings of the Apex court are no longer binding on lower courts, it would appear. Examples are the laws on sedition, free speech, criminal defamation, abetment to suicide: in spite of the Supreme Court narrowing their scope and application to prevent their misuse, lower courts continue to throw people into jails or lock-ups just on the say-so of the police, without even examining the evidence- or lack of it- before them. In fact, these laws have become major tools of persecution in the hands of the executive. Similarly, the oft-cited homily ” Bail is the rule, and jail the exception” is just that- a homily which it takes a lot of faith to believe, like the numerous high sounding, sanctimonious obiter dicta delivered by Justice Chandrachud while overruling the Mumbai High Court in the Arnab Goswami case. One would have expected that the SC, both as the superior court and the administrative head of the judiciary, would have done something to ensure that its rulings and decisions are observed and respected. It has not, and we are descending into some kind of legal wasteland

And it is not only the likes of Kunal Kamra who are increasingly giving expression to their misgivings and frustration at this state of affairs- concerns are being voiced by eminent retired judges of the SC and High Courts, senior members of the legal fraternity, sections of the media which still retain a spine, retired government officers, academia, frustrated litigants and relatives of those trapped in this dystopian legal system. Even international organisations associated with human rights and the judiciary have openly criticized us and have called for reforms.

How many contempt petitions will you list, sirs? A joke repeated too often is no longer funny and loses its punch. Listen to Kamra, your Honours, and my Lord the Attorney General. His is the voice of an increasing number of people. Like all comedians he perhaps exaggerates a bit, but not by much, I can assure you.