Manali: Restrictions inplace in movement of people and an apple crop ready for marketing, a major concern about shortage of labour has begun to worry orchard owners and could seriouly impact harvest operations in the fruit growing belt of the state.

Apple crop in Himachal Pradesh wtih an over Rs 5000 crore revenue per annum, is a major crop of the state. The authorities are projecting a production of about 5.83 lakh meteric tons this season.

Perm Sharma, President Fruit Grower Association Kullu said, “this season, transportation of apple produces to markets would be a challenging task for orchardists in Kullu district in the wake of COVID-19 pandemic and the shortage of labour due to return of migrant labourers to their home hometowns.”

However Chief Minister Jairam Thakur has been assuring orchardist that they would not face any shortage of labour, the Government is still struggling to figure out how to deal with this problem. There are only suggestions and thoughts so far. 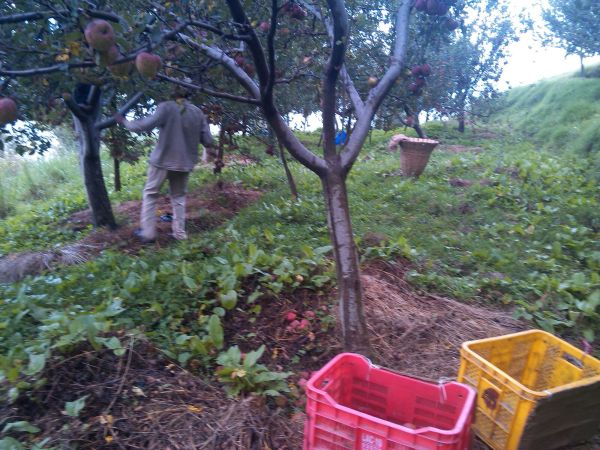 To bring back the labourers who had left the State, Chief Minister is asking the Department to hold meetings with contractors and ask them to further contact the labourers in other States. He talked about an adequate arrangement to facilitate them.

“The State Government could even consider sending buses to different places to bring Nepali labourers to the State. The matter should also be taken with the District Administration of bordering districts of Nepal to bring labour to the State,” CM said

Perm Sharma suggested that some mechanism should be worked out to bring labour from different parts of the State to the apple growing areas. This would reduce the over-dependency of growers on Nepali labour .

He also suggested that Alternative labour from Sirmaur, Chamba districts etc. should be arranged.

The Horticulture department has tied up marketing arrangements for the growers at Aazadpur Mandi in New Delhi and Gannaur Mandi t Sonipat in Haryana.

According to The experts the orchardists would get a remunerative price of their products as this year the import of apple from other countries would not be possible due to COVID-19 crisis.