Caught between the devil and the deep best describes the human tragedy that unfolds globally and especially so here in India in the wake of the lockdown imposed by the authorities to combat Covid-19. That the decision to impose the lockdown appears to have been taken without any broad strategic planning now becomes pretty obvious. The fallout of this curfew like situation is reminiscent of the refugee crisis after the catastrophic 1947 partition of the country.

Having seen how the starving migrant labour was tortured by prohibiting their movement to their home states, it’s not hard to imagine what our forefathers would have gone through when they had to trudge to India after Pakistan was carved out in 1947. The only difference between the two is that the current one was a completely avoidable tragedy.

In the absence of a well thought out & deliberated plan, the lockdown was thrust upon a hapless public leaving them with little or no time to react and make it to their homes. As a result they were left stranded without adequate support to see them through the extended period of the lockdown.

Even as various state governments made loud pronouncements of providing the migrants shelter & food, these folks were hustled into ‘concentration’ camp like areas where the living conditions were no better than slums. Some fortunate ones would have been lucky to have got a decent place to put up in but their count was abysmal. 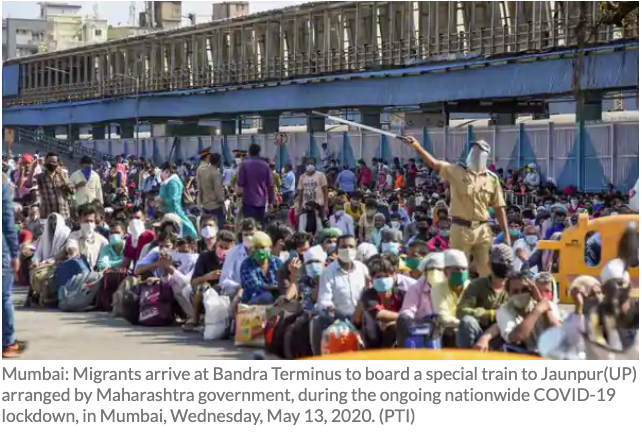 The majority craved to get back to their homes and their desperation reflected in the manner they set off on foot or whatever means they could stumble upon to hitch a ride back home. The media has been constantly highlighting the plight of these people but those who matter seemed totally oblivious & indifferent to it. It hardly mattered to the government as to how these poor folks were suffering and even less as to what should have been done to mitigate their pain.

Till today, we have heard chilling accounts of the migrants facing the wrath of the police on their way and worse still of many having lost their lives to accidents or pure fatigue. The scale of this migration is almost unprecedented in the history of independent India and all because nobody among those who mattered cared to spare a thought for our less privileged brothers, sisters & children.

This criminal neglect by the establishment is akin to cold blooded murder and will go down as one of the darkest phases in the our annals of our history. This migrant labour forms the backbone of our industry all over the country and given the fact that they have chosen to return to their homes will make it extremely difficult to revive the industry upon ending of the lockdown.

The indifferent attitude displayed towards these people by the government will create a sense of mistrust & communication gap which will take a long time to bridge. Having sensed ignorance at the hands of the authorities would have made them feel let down at a time when they needed aid the most. Coronavirus became so all-encompassing in the government approach & focus that it seemed to completely ignore everything else including the human cost of it all.

So while all the effort was directed at containing the spread of Coronavirus, we lost precious lives to plain indifference of the think tank in the government. As criticism began to mount on this mega human tragedy, the authorities seemed to wake up the enormity of the problem but even then their response has been a case of ‘ too little & too late ‘.

The migrant population which had come a long way in search of employment are now a seemingly disappointed lot and one cannot guess how long it would take them to return to their places of employment after they return to their homes. Irrespective of this, it is a pathetic reflection on the competence of our elected leadership & bureaucratic set up to tackle a crisis of this magnitude. They have proven themselves to be extremely wanting in their ability to respond to call of duty when they were called upon to do so by a global pandemic.

When you have people with a myopic outlook leading you on, it would be naive to expect them to take a farsighted view to show us the way ahead. The future is bright but our leadership seems to be in the dark. I’m banking on Divine light to show us the way.