Manali: The coronavirus outbreak has hit Himachal Pradesh with a triple whammy. With the state having closed its borders before the national lockdown, the tourism industry, on which lakhs of livelihoods depend, was completely shut down. 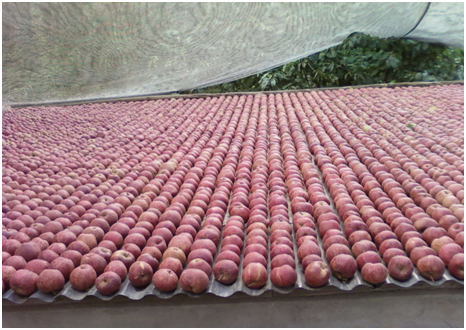 While initially just three positive cases were reported, with one death, and a manageable number of foreign returnees requiring surveillance and tracing, the Tablighi Jamaat event in Delhi has caused a sudden increase in the number of positive cases even as health authorities scramble to trace primary and secondary contacts of those who had visited Delhi.

The third whammy is the potential catastrophic disruption of the state’s famed apple crop. Manila’s apple basin, comprised of areas like Kothi, Burva, Vashisht, Left bank and upper Kullu valley is afraid of the impact of corona on the next crop season with small and big apple growers fearing the present unfavorable conditions could adversely impact a timely, healthy, nutritive and rich produce.

Necessary preparatory work on the farms and orchards during March–April is being severely hit. The supply of insecticides, necessary nutrients and other inputs like anti-hail nets and honey bees that help in the pollination process, are all disrupted by the lockdown. The lockdown also prevented farmers from going to their orchards.

Horticulture scientists, on their part, have expressed concerns about weather uncertainties and prevailing low temperature conditions. “The transition from winter to summers not happened in its usual manner,” said Rajesh Sharma, orchadist from left bank of Manali. He added “This affects the flowering and will delay the pollination process in the orchards.”

According to him the ideal temperature at this time should be between 16-24 degrees Celsius. But Manali and adjoining areas had temperature between 11 to 13 degrees. Cloudy skies and snow at higher altitudes are not conducive conditions for the apples to mature.

Nitan Sharma, an orchardist from Jagatsukh, stresses the importance of keeping open the supply lines for insecticides, fungicides, fertilizers and pesticides. All of which comes from Gujarat, Maharashtra, Haryana and Punjab. Fear of police harassment prevented truckers from moving these consignments. “The existing inventory has been sold out,” said Sharma. “This calls for some government action to ensure smooth movement of farm spray products. If weather remains unfavorable with rains, cloudy days and drop in temperature, the crops could face fungal infections”.

The worry of fruit growers is not just the lockdown effects on apple orchards, but also farms growing cherries, pomegranate and green almonds which will not be able to reach the markets as transportation is likely to remain an issue when the crop matures in July-August. Govind Singh Thakur MLA and cabinet minister conveyed these concerns to Chief Minister Jai Ram Thakur.

“Some issues were resolved on the spot with the CM passing orders to facilitate unrestricted movement of all necessary farm inputs. Some consignments have reached and more will get delivered soon,” said Thakur. “Orders have also been placed for bringing boxes of honey-bees, which are required for pollination. Honey-bees are brought from Haryana and Punjab and rented to farmers.”

But that, too, is facing a problem. As a Manali orchardist Joginder Rana explained: “Those who rent out honey-bees are not taking any risk. They have to undergo quarantine period as per coronavirus guidelines in case they enter Himachal Pradesh from any other state. Thus there is shortage of bees too.”

Himachal’s apple economy has shown high growth in recent years despite the dip in the share of agriculture in GDP from 15.35 percent in 2014-2015 to 12.73 currently. As per the Economic Survey 2019-20 laid in the Vidhan Sabha, horticulture production in the state had increased by 42.83 percent, of which apples constituted almost 60 percent, worth Rs 4,500 crore.

Today, an uneasy calm hangs over the apple belt due to the lockdown and coronavirus fears. A majority of the Nepali labourers, the backbone of the apple economy, handling farm activities ranging from pruning, spraying and crop loading and unloading, have stayed away. Even skilled labourers from UP,Punjab and Jammu Kashmir areas of the state, who are experts in putting-up anti-hail nets on the plants, have gone home.