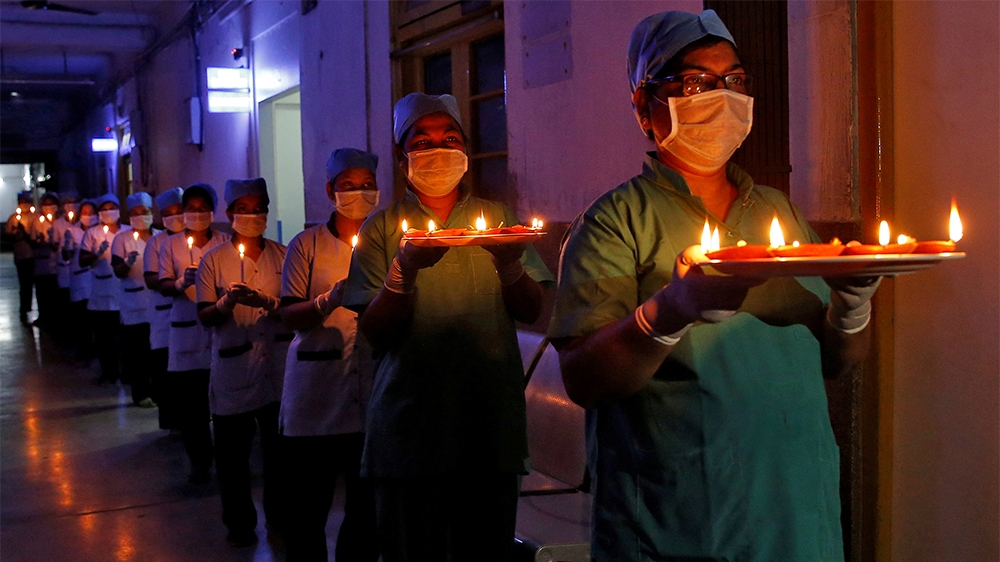 Doctors and health-workers are angels in the country under China-Virus invasion. But these angels are abused, stone-pelted, attacked and spat at, with foreign media having a field day criticizing India. On April 22, government passed an ordinance saying persons attacking health personnel can get 6-months to 7-years jail, with penalty for non-serious cases Rs 50,000 and for serious cases from Rupees two to five lakhs. This came after Indian Medical Association declared April 23, 2020 ‘Black Day” to protest against pan-India attacks on healthcare professionals, workers, staff and doctors, demanding government should punish offenfers.

Time will show manner of how the ordinance is implemented, loopholes lawyers will find and decoding “attack” – only covers body harm? What about those spitting on medical equipment and desk of medicos to spread virus? What about Tablighis roaming minus pants in the Ghaziabad Hospital making obscene gestures at female nurses and playing dirty songs? What is punishment for such psychological “attack”?

At least three doctors died due China-Virus – one each in Indore, Karnataka and Chennai. There may be more. Number of doctors in quarantine is unknown beyond one reported in Delhi March 27 three reported in Mumbai. Data a on health-workers too is unavailable but 90 were reported infected on April 27. Battling the virus, doctors and health-workers are under pressure both physically and psychologically; long working hours and likelihood of contacting the virus. China has been supplying defective PPE and health workers are mostly equipped with masks and gloves. Many don’t go home to avoid possibility of infecting their families. Yet they smile and remain upbeat even after being attacked. Some are seen entertaining and singing to their patients; dedication perhaps more than tending to wounded in war.

In Indore, mobs stone-pelted two lady doctors and health-workers gone to screen suspected virus-infected case; both said the incident will not deter them from their task. In Moradabad, a mob attacked an ambulance carrying medical personnel and police accompanying family members of a person who died of China-Virus. Women health-workers checking for virus-infected suspects were abused and manhandled by villagers in Bareilly. A group of Asha (Accredited Social Health Activist) workers was assaulted in Bengaluru similarly. A team of health officials who came to shift 58 China-Virus suspects to a quarantine facility were attacked by a mob of 200 in Bengaluru. They had to retreat leaving 33 locals who needed to be quarantined.

The most heinous incident was in Chennai where body of Neurosurgeon Simon Hercules, who died of China-Virus, being taken for burial was attacked by a 300-strong mob with sticks, stones and bottles, smashing windows of the vehicle. The accompanying doctor with two ward boys later performed the burial by themselves though police had arrived – sacrilege for a doctor who treated patients all his life! News says locals did not want body of the doctor buried, but there is no such government ruling and US-Europe is burying their dead.

Tablighis believe China-Virus is God’s punishment for misdeeds; those destined to die will die but jihad must continue. Attacks are also due perceived stigma and social ostracize if tested and quarantined. This mindset needs to be changed. A campaign is required to encourage public willingly come forward for testing; describe them champions who protect their families, society and the nation. Concurrently, need is to ostracize those who are ostracizing the infected doctors, health-workers and others, without confusing mental ostracizing with social distancing. This should also be campaign of local politicians who only reach out during elections. China is using drones extensively for broadcasting. Why can’t we do so similarly, repeating messages periodically and warning before doctors and health-worker go out on a mission against attacks and that suspects/infected hiding is an offence?

Finally is the need to get to the root of mob attacks – prosecute the manipulators, not just FIRs against front actors. Administering truth serum may need a court order but witness treatment meted by Punjab Police to Nihangs who attacked a police barrier and chopped off a constable’s hand. Behind mob attacks invariably are politicians – local or otherwise. How did 300 hooligans attack the hearse of Dr Simon Hercules? Who gathered them? Similarly, weren’t the Palghar killings of three including two Sadhus politically motivated even if not sequel to attacking hearse of Dr Simon Hercules? How did hundred-plus mob gather with sticks if they had not been informed about movement of the vehicle and what instructed to attack them? Who was behind thousands of migrant labourers gathered at Bandra defying lockdown?

Arnab Goswami can shout from rooftops about Congress goons attacking him because he criticized Sonia Gandhi – small mercy the motorcycle-borne duo weren’t carrying a pistol or Molotov cocktail. But Congress may hit back saying Arnab organized the attack himself for earning Z-plus security, citing his duplicity when in early 2000s he spewed venom against Narendra Modi, even accusing him squarely for the Gujarat riots, all of which is on record. This is the irony of India. Politicians do their utmost to down opponents and their supporters – killings are small matter. But we take refuge behind a notice by ED, be it Chibambaram, Kashmiri politicians-separatists or Saad Khandalvi merrily cocking a snook at the Centre.

MK Dhar, former joint secretary IB, wrote in his book ‘Open Secret – India’s Intelligence Unveiled’ that throughout tenure of President Zail Singh, his bedroom and office telephones in Rashtrapati were bugged since he had been entertaining, arming and financing Sikh terrorists when Union Home Minister. Means of communication today are diverse but anti-nationals need to be nabbed. We need to clean up house.