News headlines of March 2 read ‘Foreign secretary in Bangladesh with CAA balm’. The report said the foreign secretary is in Dhaka with primary task to assuage some serious hurt feelings amid Bangladeshis over both the CAA-NRC controversy as well as some ill-judged comments by Indian politicians. It also mentioned India wants a trade and services pact with Bangladesh, negotiations for which would begin soon. 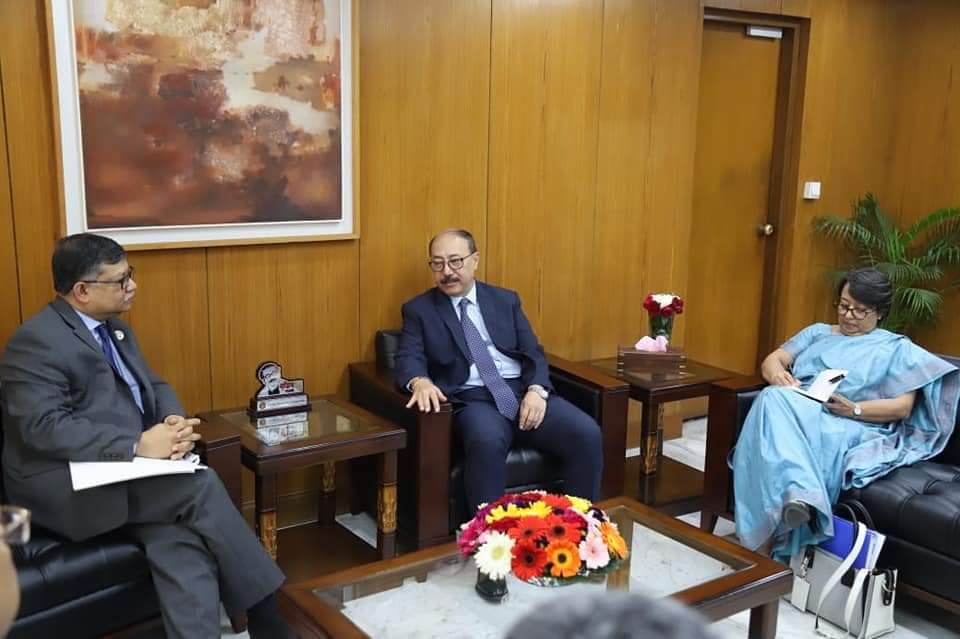 Next day’s news reported Foreign Secretary Harsh Shringla telling a high-powered audience in Dhaka that India’s National Register of Citizens (NRC) is “a process that is entirely internal to India. Therefore, there will be no implications for the government and people of Bangladesh. You have our assurance on that count.” He also called on Bangladesh Prime Minister Sheikh Hasina, and met his counterpart and other officials.

Adviser to Sheikh Hasina, Gowher Rizvi told Shringla, “our commitment to secularism is absolutely central and we do not want to see any situation where our secularism will be threatened anyway.” Describing NRC a “burning issue”, Rizvi emphasized minorities in Bangladesh were equal citizens with government attaching highest priority in protecting and addressing their rights.

Prime Minister Narendra Modi is scheduled to visit Dhaka on March 17 to participate in the centenary celebrations of Banglabandhu Sheikh Mujibur Rehman. Were it not so, Shringla’s visit probably may not have taken place at this juncture, letting Bangladesh simmer with the NRC “burning issue”. This, despite India has been enjoying the closest relations with Bangladesh under Sheikh Hasina till NRC cropped up.

In September 2019, Hasina took up the NRC issue with Modi during their bilateral meeting on sidelines of the UNGA meet in New York, calling NRC a matter of “great concern”. Modi reportedly responded there was no cause for worry with India and Bangladesh having good relations. During her India visit in October, Hasina again raised concerns over NRC, to which Indian response was it is an internal matter.

Rollout of NRC Assam excluded 11 million – three million Hindus and eight million Muslims. Calls then began for pan-India NRC with BJP-ruled states supporting the move and other opposing it. Speculation also began if Assam excluded 11 million, what would be the number pan-India? Congress and BJP exchanged barbs about who started constructing detention camps in Assam and elsewhere. Some reports said, illegal immigrants may have to stay in detention camps for three years before deportation.

Early last year, BJP President in a public rally termed illegal immigrants “termites”, vowing to throw every illegal immigrant out of the country. In a subsequent rally on October 1, 2019, the Union Home Minister said, “I today want to assure Hindu, Sikh, Jain, Buddhist and Christian refugees, that you will not be forced to leave India. Don’t believe rumours. Before NRC, we will bring Citizenship Amendment Bill (CAA), which will ensure these people get Indian citizenship.”

Parliament passed the CAA on December 11, which sought to amend the definition of illegal immigrant for Hindu, Sikh, Parsi, Buddhist and Christian immigrants from Pakistan, Afghanistan and Bangladesh, who have lived in India without documentation. They are to be granted fast track Indian citizenship in six years instead of existing 12 years of residence for naturalization. But viewed from Bangladesh point of view, CAA-NRC Assam and Indian ministers making public statements about throwing out every illegal immigrant by 2024, made it a “burning issue”.

Bangladeshi feared India wants to deport eight lakh Muslims excluded from NRC Assam to Bangladesh, which is already overflowing with 1.1 million Rohingya refugees. On December 11, 2019, Bangladesh Foreign Minister AK Abdul Momen expressed concern over CAA saying it would weaken India’s historic character as a secular nation. Next day visits of Bangladesh Foreign Minister AK Abdul Momen and Home Minister Asaduzzaman Khan to India were abruptly cancelled. On December 13, Bangladesh protested against the attack on the convoy of its senior diplomat and vandalizing of signposts of the chancery of its mission outpost in Guwahati by anti-CAA protestors.

Shringla’s message in Dhaka on March 3 that NRC will have “no implications for the government and people of Bangladesh” indicated that the illegal immigrants are not being thrown out – unless aim is continue the ambiguity. On January 19, 2020, Finance Minister Nirmala Sitharaman stated that 2838 Pakistanis, 914 Afghans, 172 Bangladeshis were given Indian citizenship in last six years, which included around 1595 Pakistani migrants and 391 Afghanistan Muslims during 2016-2018 under Modi government. Typical of India for finance minister making this statement, instead of the home minister whose forte this is.

Calls for pan-India NRC appear replaced with National Population Register (NPR) but what happens to the eight lakh Muslims excluded from NRC Assam? Was their “throwing out” political rhetoric or has it fizzled out realizing it wouldn’t work out? After all in last six years only 12 Rohingyas have been extradited to Myanmar despite India building 250 prefab huts for Rohingyas in that country.

Why did we create a situation to estrange our relations with Bangladesh? Within India we witness worst war of words between political parties but politicians need to be careful about rhetoric having international ramifications. Saying later it is India’s internal matter doesn’t assuage bad feelings when the ambiguity has been allowed to linger. Do we realize what is happening around us with Bangladesh and Myanmar number two and three respectively in importing China’s $1.04 billion arms export and China-Myanmar Economic Corridor coming up?

What will happen to those excluded from NRC Assam and those that may be found ineligible for inclusion in NPR? Have we analyzed long-term consequences of de-franchising lakhs of people without recourse to send them out even if it gives electoral advantage in short-term? Coupled with all time high of 7.67% unemployment rate is this not recipe for more instability?

Finally on March 3, India protested strongly over comments made by Iranian Foreign Minister Javad Zarif who referred to the recent Delhi riots, urging Indian authorities to not let “senseless” violence prevail, and tweeted: “Iran condemns the wave of organized violence against Indian Muslims”. Had we not spoiled our relations with Iran by latching on to American interests, would we have received such comments from Iran?