Article 51 (1) of our Constitution enjoins upon us to develop a critical temperament, to encourage the spirit of inquiry and reform, one reason why we have more than 800 universities and 48000 colleges. But it would appear that the present government at the centre, and its minions, are more of the opinion of the late Madhusudan Das who once famously described Madras university as “the slaughter house of intelligence.” Having already shut down the real slaughter houses, it appears that it has now decided to shut down, or at least make life difficult for, those universities which display too much of the spirit of inquiry or criticism – JNU, AMU, Jamia Milia, Hyderabad, Jadavpur- and to advise others (including the IITs and IIMs) to remember that curiosity killed the cat. To fill up the resultant vacuum the BJP has mustered its own pantheon of intellectual luminaries to share their scholarship with us, both citizens and termites, till the latter are flushed out of the woodwork by the NRC spray. 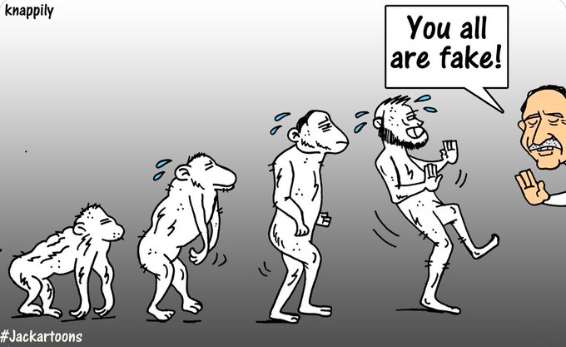 The BJP/RSS new age scholars have little time or patience for established history, science or literature and not since the Renaissance have we been exposed to such a wealth of transformational ideas. One ex-Minister, Satyapal Singh, demolished Darwin’s theory of evolution because none of his ancestors ever saw an ape morphing into a homo sapiens, and since seeing is believing (he used to be a cop, hence the emphasis on eye witness testimony), he chose not to believe Darwin. He even wanted to revise the textbooks but was fortunately soon banished into the wilds, where no doubt he is now conferring with those poor derided apes who, like him, failed to evolve.

The poor cow and its various derivatives have been imbued with powers that had escaped the attention of many centuries of scientific research – curing of cancer, exhaling of oxygen, passing gold in its urine being three of the most important scientific discoveries. Mr. Harsh Vardhan, the then Minister of Science and Technology no less, chided Delhi-wallahs for complaining about air pollution and advised them to combat it with “gajar ka halwa”, thus revealing not only a sweet tooth but also an Achilles heel. The otherwise urbane and suave Piush Goel, in an epiphanic moment, took the scientific world by storm when he revealed at a Board of Trade meeting that it was Einstein, not Newton, who discovered gravity. He will hopefully correct himself when the penny… er.. drops. Never one to be outdone, our feisty Finance Minister Mrs. Sitharaman blamed Uber for our difficult drive to a five million dollar economy., confusing the driver-less economy with driver-less cars. Mr. Prakash Javadekar added his own bit by suggesting that listening to music in the mornings would neutralise the PM 2.5 molecules, but did not advise us on what to do with the far more harmful PM 2.0 molecules of Mr. Modi’s second term. Unknown to us at that time (but made clear this last week) the source of his arcane knowledge was revealed by Mrs. Kiran Bedi, the governess of Puducherry, in a recent tweet: a fake NASA video of the sun from which emanated (according to Mrs. Bedi) the sounds of OM. It is quite possible that Mr. Javadekar had this celestial music in mind when he dropped his pearl. Neither of these eggheads paused to consider the obvious: that space is a vacuum and sound cannot travel in a vacuum. But then, of what use is the spirit of inquiry if it is not allowed to soar to the sublime heights of the ridiculous? My humble counsel to the duo is that they should stick to their forte: Mr. Javadekar to fudging figures of the tiger count and forested area, and Mrs. Bedi to giving the finger to the unfortunate Mr. Narainsway, Chief Minister of Puducherry.

Mrs. Bedi was not the only Governor who refused to play second fiddle to Ministers: Mr. Dhankar of West Bengal fame, may just have made it more difficult for us with the Nuclear Suppliers’ Group by divulging (at a science congress, no less) that Arjun’s arrows were tipped with nuclear warheads! The poor Mr. Jaishankar, our Foreign Minister, is reported to be now waiting with bated breath for Donald Trump’s reaction. Not to be outdone, the tub thumping MP from Delhi, Mrs. Meenakshi Lekhi, thumped the Microsoft chief Satya Nadella by tweeting that he is a literate who needs to be educated, effectively putting him on par with the Bihar Class V student who cannot read a Class II text- officially literate but uneducated. We will have to wait and see what this does to Microsoft’s shares, though Mrs. Lekhi’s stock will certainly go up in Race Course road.
Having demolished science, medicine (remember our PM’s revelations about plastic surgery in vedic times?), astronomy and history, and having introduced “Bhoot Vidya” as a subject in some colleges, these mutant geniuses have now trained their guns on literature. IIT Kanpur has ordered an inquiry to determine whether a poem by Faiz Ahmed Faiz – HUM DEKHENGE – is anti national. Why? Because it was sung by some students at a protest against the CAA/NRC. While this quest for knowledge is commendable it does raise some questions about the condition of the Director’s brain cells and telomeres. It is obvious that, in his quest for a few pats by the Deadly Duo, he forgot that Faiz was a democrat and a liberal, not an Islamist; a rebel against Pakistan authoritarianism who was jailed twice for speaking out and exiled. A little research would have revealed that the stirring words of the poem which are the subject of the inquiry- “sab taaz uchhale jayenge,sab takht giraye jaenge”- were directed at the then dictator of Pakistan, General Zia-ul Haq, and that the other line – “Raj karega khalke khuda”- is not an Islamic chant at all, it simply means that God’s people will rule.

The brains trust of Kanpur IIT should also know that poetry and poets have always embraced dissidence and have always stood against any kind of authoritarianism; that imagery is their stock in trade and shouldn’t be interpreted literally; and that generations of youth have used the verses of poets as a rallying cry against what they perceive as injustice. The Director would be well advised not to inject politics into literature or else he would have more inquiries on his hands than he could handle. Who would he inquire into next: Shakespeare for promoting love jihad in Romeo and Juliet? Othello for honour killing? Charles Dickens for saying that “it was the best of times, it was the worst of times” as a prescient but unwelcome commentary on today’s India? Rabindranath Tagore, whose imprecation to God to lead his countrymen to a world where the head is held high and the mind is without fear, may be interpreted by some lumpen to be seditionist? And will inquiries also be ordered into the poems of Ramdhari Singh Dinkar, Majrooh Sultanpuri, Kaifi Azmi, Javed Akhtar, Gulzar, Salil Chowdhury, Iqbal, Sahir Ludhianvi, Rahat Indori and Bhupen Hazarika ? Let literature be, sir, it’s not your cup of tea. Or, as another poet said:

“A little learning is a dangerous thing,
Drink deep, or taste not the Pierian spring.”

In college one of my Professors was fond of telling us that one should go on learning as long as one is still living. Given the spirit of officially sanctioned erudition these days, however, all one can say is: ” Death, where is thy sting?”