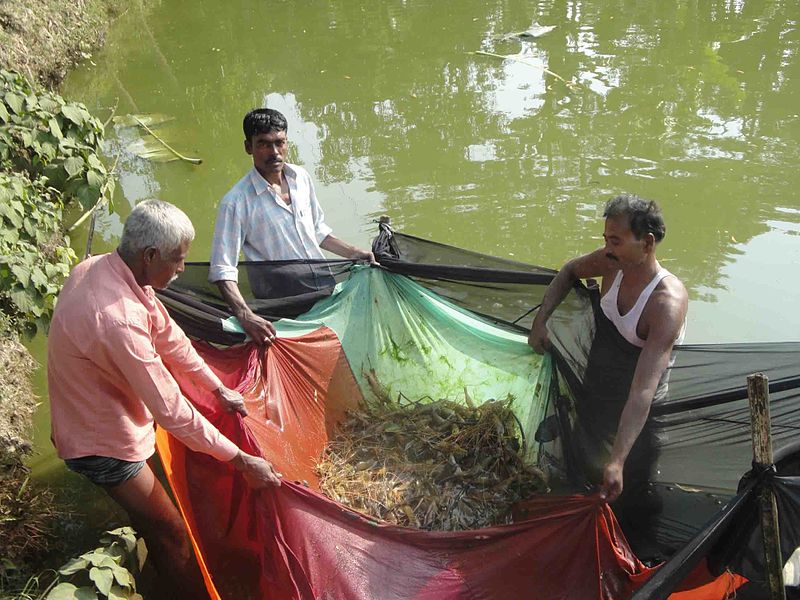 The story of the growth of the shrimp aquaculture and industry over the last decade is stuff dreams are made of. From facing near closure leading the farmers to penury, the industry has emerged as the leader of Indian agriculture exports lending prosperity to the lakhs involved in hatchery, farm and processing operations. A more than 800% growth within a decade is not an everyday story.

Starting with the late1990s, shrimp production trends showed stagnation, later decline before plummeting to an all time low of a mere 76000 tonnes in 2008-09. Farming was characterized by monoculture of Penaeus Monodon, commonly known as Tiger Shrimp/Prawn. Absence of a breeding programme meant reliance upon the wild for sourcing the brood stock. The vulnerability to disease of brooders sourced from the wild was severely exposed with the onset of White Spot Syndrome Virus (WSSV), one of the most pathogenic and devastating viruses affecting the shrimp industry. A large number of hatcheries and farms were left with no option except to shut down; the sea food processing industry had to drastically reduce capacity. Though the estimates of the shrimp sector shutting down across the entire value chain vary between 50 to 80%, the graph of growth was surely going down pushing people into alternative vocations.

Meanwhile other prominent shrimp producing countries had shifted to culturing Litopenaeus Vannamei, also known as Pacific White Shrimp. The species, after years of research abroad, had been fully domesticated. Specific Pathogen Free (SPF) brooders developed in bio-secure facilities were now commercially available. The species was not only tolerant to a host of viruses and diseases, it was also several times more productive. A section of Indian farmers, hatchery operators, sea food processors and other stakeholders had since long been clamouring for introduction of this shrimp to save the sector from eternal doom. There was an equally vociferous section vehemently opposing the introduction of this exotic species arguing that new and unknown diseases might invade our waters and we were not prepared to handle such an eventuality. The irony was lost on everyone that the sector was already highly diseased with no cure in sight. Surprisingly, the opponents of L Vannamei, the Pacific White Shrimp were the leading scientists and powerful decision makers who were to be the final arbiters in the debate. An interesting display of xenophobia.

After prolonged debate and discussions, at times acrimonious, L Vannamei got introduced amidst a very strict regulatory regime and oversight. We were almost a decade too late but luckily we caught up much faster. The shrimp industry experienced miraculous turn around of fortunes and we were to soon leave behind other competitors in capturing export markets. And today shrimp comprises 65% of our total fish exports which stand at US Dollar 7.4 billion, equivalent to Rupees 48,000 of which shrimp is valued at US Dollar 4.9 billion or Rupees 31,000 crore, and L Vannamei makes up this entire shrimp export. Up to the year 2008-09, the entire shrimp production of paltry 76,000 tonnes comprised Tiger Shrimp, whereas, today L Vannamei alone stands at 6,23,000 tonnes out of a total shrimp production of approximately 7 lakh tonnes in the country.

No doubt, this story of success is impressive and difficult to replicate, the challenge to sustain the growth is staring us in the face and we do not seem adequately prepared to meet it. It may still not be late to learn the one important lesson from the doom the industry faced not too distant in the past. The downfall was brought about by reliance on a single species i.e. P Monodon/Tiger Shrimp and smugness in its success. Ironically, the subsequent turn around and prosperity is also owed to a single species. Periodic diversification is an elementary strategy to stay afloat in any venture, more so in one such as shrimp farming which carries a high degree of risk. This single species is exotic and we are fully dependent upon import of brooders for seed production and farming. What to say of a breeding programme, we are yet to create even brood multiplication centres which would reduce import dependency and reduce costs. So the first step is already chalked out for the government and the new ministry and department: allow establishment of brood multiplication centres releasing the hatchery owners and farmers from over reliance on a handful of import sources. Revival of P Monodon/Tiger Shrimp should also feature high on the agenda. Much research and experimentation has gone since the past and resilient seed should now be available. India has a unique opportunity to be the world leader in production of both the white pacific shrimp and the native tiger shrimp.

A very strict regulatory framework was the hallmark of introduction of L Vannamei but this framework is now becoming an impediment stifling growth and innovation. The regulation covers from restriction upon the animals one could import to the capping of productivity. Many such restrictive diktats are falling behind the scientific and management practices developing in the sector which has already started witnessing a dip in growth. Regulatory organisations would well be advised to address the issue of emerging pathogens and diseases about which little is known beyond the symptoms. The industry too needs to be strictly disciplined against reckless use of antibiotics in certain pockets. After all, despite our impressive performance in the export markets, we are yet to assume a prime position in the biggest of all export destinations that is the European Union. This is on account of our inability to meet their stringent hygiene and quality standards. Our US and China centric exports have led to depressed prices and this needs quick correction.

It would serve the sector well and help in sustaining growth if we shelve our obsession with exports and develop the huge domestic market which the world is eyeing but the shrimp has ignored. Surely, it should be much easier and cheaper to transport shrimp fro Vishakhapatnam to say Delhi or Ludhiana than to the US or China. A simple google search would reveal that the price of shrimp in the Delhi market is higher than it is in London or New York. The policy makers and the industry should sit down together to find a solution to this mystery.

Recent history of shrimp farming in Ecuador draws a good parallel and could provide useful lessons. Like us, the sector in the 1990s underwent a series of crisis resulting in huge mortality and the production dipped down to a mere 20,000 tonnes in the year 2000. An ambitious and scientifically managed breeding programme was launched and home grown tolerant stocks developed. Today, this small country produces high quality shrimp to the tune of five lakh tonnes per annum. Introducing new genetics, species diversification, multiplying brooders within the country and tapping the huge domestic consumer base should ensure sustainability and continuing growth and prosperity in the shrimp aquaculture sector. Fortunately, quite a large number of key private players at all levels in the sector are either qualified professionals or highly experienced aquaculture farmers. Seldom do they demand any subsidies or financial incentives. An encouraging eco-system and environment coupled with pragmatic policies would spur further growth and prosperity through the entrepreneurship unique to this sector. In fact, there are useful lessons to learn and examples to emulate for the entire agriculture sector.