High dependence on virtual modes of communication has built psychological walls of isolation for many kids in this digital world.

With the advent of modern day digital drugs in the form of so called ‘smart’ & ‘cool’ gadgets and, its ensuing rise as addiction amongst school children; the hidden cons of a reckless digital world have now become tragic realities. In a recently conducted survey-based study by UNICEF, titled, ‘Children in a Digital World’, it has been found that nearly 71 percent of the global youth (which includes children upto the age of 15) has now got access to fast internet & modern-day digital paraphernalia. Inevitably, with this enhanced digital footprint; their growing dependence on digital devices in every-day lives, seems to be a normal corollary. But, as a constantly evolving human race, a very pertinent question that we should ask ourselves is whether this digital use or abuse has looted our millennial generation/s from its real life experiences & social interactions, or has it empowered them in ways unimaginable. 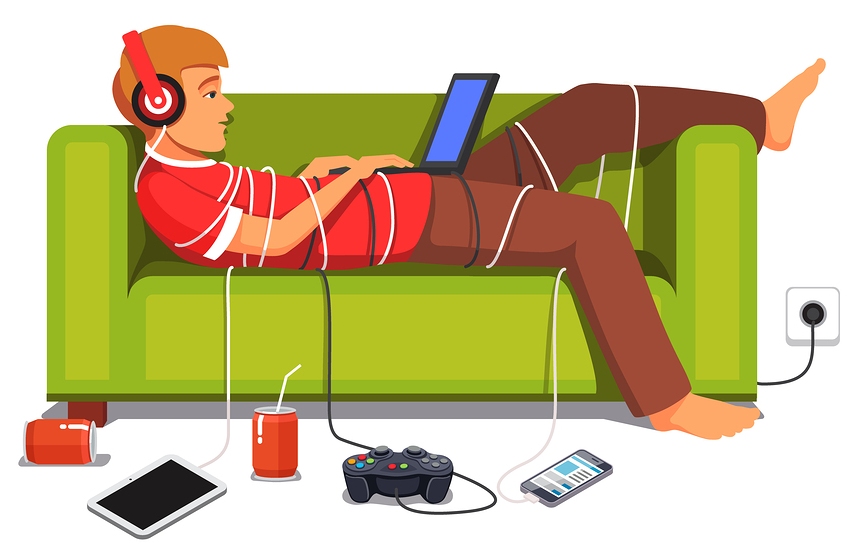 I remember, during my good old school days in the late 90s & early 2000s, when the world was still unhurt from the trappings of digital boom; we would play anywhere & anytime with things which were downrightly so simple, yet, the same intrigued us profoundly. Undeniably, now; with smart phones, tablets & gaming boxes substituting those modest joys; the world seems to be shifting diametrically from an era of seeking contentment from humble experiences to that of attaining instant gratification from fabricated illusions of the digital world. I heavily doubt, whether the present-day school-going generation has remained as carefree & playful as ours; rather, on the contrary, I strongly feel that it has become caged, both, mentally & physically, in the virtual prisons of online gaming & social media overuse.

A new study published in PM&R Journals, reveals that in US & UK ,the average screen time for children in the age group of 14 -17 is 7 hours per day, which far exceeds the permissible limits recommended by governments & related health ministries, globally. In conjunction to the above stated fact, various other studies done worldwide have concluded that a majority children who spend high screen hours tend to be less happy in life & face issues in socializing with their peers while having face-to-face interactions. Indubitably, high dependence on virtual modes of communication has built psychological walls of isolation for many kids growing in this digital epoch. In fact, the Facebooks & Whatsapps of today, have resulted in creating a degenerated class of young minds, who are filled with superfluous information of all sorts but lack the very essential skills of analytical thinking & insightful rationale.

Digital addiction, in form of excessive online gaming, internet surfing, mobile texting or screen watching have a dampening effect on an individual’s creative & cognitive abilities. The ongoing PUBG game mania among youth bears a testimony to the fact that perils arising from digital addiction are quite real in our contemporary world & need immediate attention of our policymakers and intelligentsia. No wonder, in the 11th Revision of International Classification of Diseases (ICD-11), WHO (World Health Organisation) classified Online Gaming as a mental disorder. As the use of new modes of digital technologies & means will rise in this century, without an iota of doubt, the society as whole will also witness a high rise in ailments, both, psychological & physical in its nature.

Therefore, governments across the globe should come together & devise a universal global policy/program setting permissible digital use limits for children & adults of varying age groups. In India, Delhi’s Aam Aadmi Party (AAP) Government has been working towards outlining similar guidelines and has set a screen time limit of one hour per day for kids lying in the age bracket 2-5. Other states under the aegis of Central Government can too toil in this direction to frame educational/ICT policies & regulations surrounding Digital Addiction & help in saving the Next Gen kids from a possible Digital Arrest.